The first Heritage Minute ever to pay tribute to an Inuit artist takes on one of the greats—the late, world-renowned Kenojuak Ashevak. 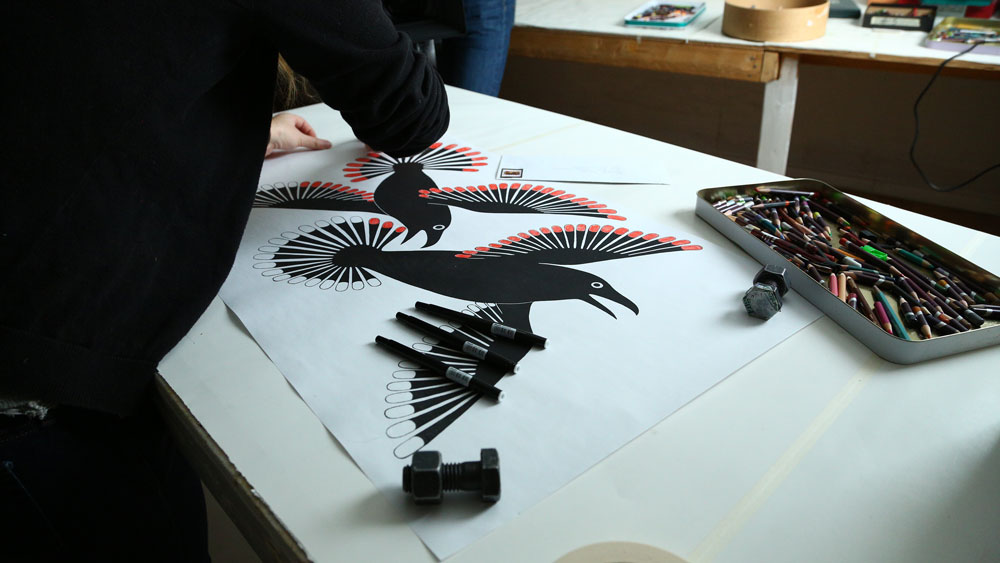 The new Heritage Minute about Kenojuak Ashevak was filmed in Cape Dorset, where Ashevak made most of her nationally and internationally recognized art. Production still courtesy of Historica Canada.

“There is no one Inuit word for art. We say it is to transfer something from the real to the unreal.”

Those are the beginning words of the first Heritage Minute ever to pay tribute to an Inuit artist.

Kenojuak Ashevak (1927–2013), one of the most famous Inuit artists ever, is pictured in the new heritage minute both as a young woman moving to Cape Dorset (played by Miali Buscemi) and in her old age, drawing (played by Kenojuak’s sister, Koomoatoo Mathewise).

Some of Ashevak’s most iconic drawings—like those of owls, which have also appeared on Canadian postage stamps and coins—are also animated in the short film.

“We have done minutes on Indigenous people, and the Inuit community, in the past, but never on a related art movement,” says Anthony Wilson-Smith, CEO of Historica Canada, charity that produces Heritage Minutes. “But if you travel, you become aware that Inuit art is perhaps even better known outside Canada than it is within Canada—it’s a real international symbol.”

Wilson-Smith also says that surveys indicated Canadians wanted to know more about Nunavut and about Canadian art—so Ashevak’s story seemed like a perfect fit for a new Heritage Minute.

To ensure accuracy in the Ashevak Heritage Minute, Historica Canada worked with Inuit art historian Heather Igloliorte as well as with the Inuit Heritage Trust. They also filmed on location in Cape Dorset.

And also, for the first time ever, the Heritage Minute isn’t just being in released in English and French—it will also be released in Inuktitut.

The film also underlines Ashevak’s connection to the founding and growth of the Cape Dorset Co-Op (also known as Dorset Fine Arts or Kinngait Studios), which has acted as a studio and distributor for the work of many Inuit artists.

“Like a lot of Canadians, I knew Inuit artists had a great reputation, but I had not understood the importance of the Cape Dorset Co-op,” Wilson-Smith says. So the team wanted to highlight that too.