For some Canadian artists, the recent American travel ban is the latest in a stream of Islamophobia that has affected their lives and careers for years. 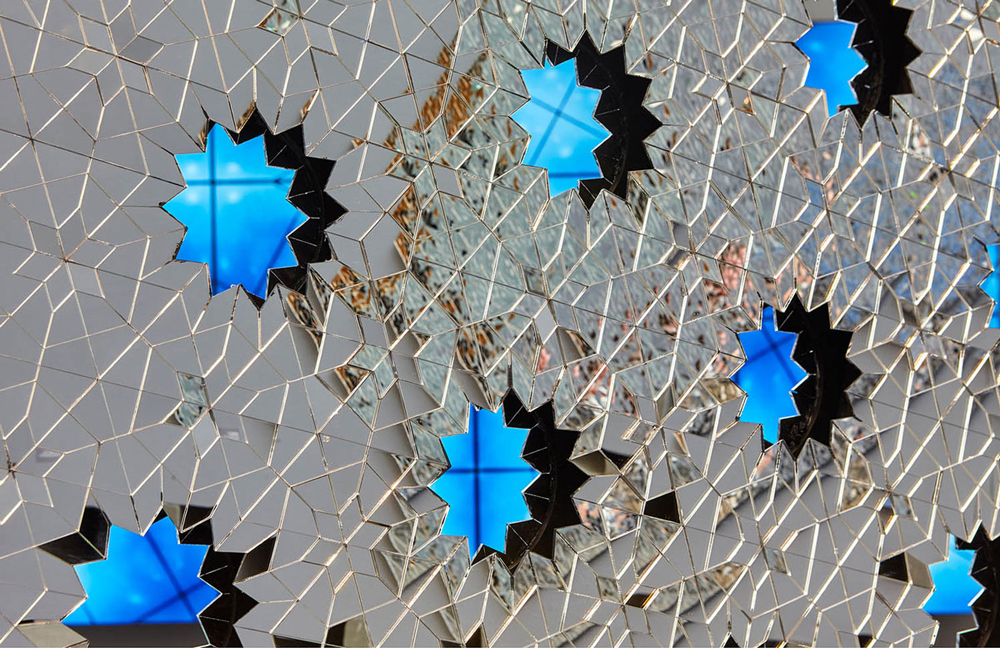 Sanaz Mazinani's Threshold is a multimedia piece with mirrors, video and six-channel audio element composed by her brother, artist Mani Mazinani. But US travel ban restrictions are making the duo rethink travel to an upcoming exhibition of the work in San Francisco. Photo: Courtesy Sanaz Mazinani.

Some Canadian artists feel they have been put in limbo by the ban US President Trump has ordered on travellers, residents and green-card holders from Iraq, Iran, Libya, Somalia, Sudan, Syria and Yemen.

Others are noting that Trump’s ban—and concurrent events like the Quebec City mosque shooting—are just the latest in a stream of Islamophobia that has affected their lives, and their art careers, for many years.

Canadian artist Sanaz Maziniani, who was born in Iran, is currently based in San Francisco, where she is a green-card holder and permanent resident.

Up until recently—in addition to caring for her two-month-old baby—Mazinani had been preparing for two San Francisco exhibitions: one due to begin February 16 at Camera Work, and another opening February 18 at San Francisco State University.

Both exhibitions were to slated include collaborations with her brother, the Toronto-based Canadian artist Mani Mazinani, who was also born in Iran.

Now, with the ban in place, it is unlikely that Mani Mazinani will travel to San Francisco to complete and install the collaborative artworks.

“He was planning on coming February 10 to oversee the installation,” Sanaz Mazinani says over the phone from San Francisco. “Now we don’t know if he was going to be able to make it.”

“He came to Canada when he was four years old, and I was 11,” Mazinani continues. “It’s pretty ridiculous, but it’s happening, apparently.”

Reassurances on Canadian Citizens Not Enough

Though Canadian Immigration Minister Ahmen Hussen said earlier this month that he has received assurance from US authorities that Canadian citizens will be permitted to travel regardless of country of origin—and news outlets are reporting same from a Homeland Security briefing this afternoon—Sanaz Mazinani says she and her brother likely won’t take the risk.

“My brother has a two-year-old, so they don’t want to come all the way here to be detained for 12 hours and then sent back,” Sanaz Mazinani says.

The ban has also created anxiety in the wider Mazinani family.

“My mom called last night and was like, ‘I can’t sleep. I may potentially not see my grandchild for three years,’—because if she can’t come here, and I can’t go there,” the family will be separated, like so many others.

Some of Sanaz Mazinani’s artworks going on view this month deal with Donald Trump, refracting and reflecting his image into her characteristic kaleidoscopic arrays.

“I knew the show [at Camera Work] would open after the inauguration, and my work deals with media and the significance of how social media affects our understanding of what is going on globally,” Sanaz Mazinani says. “I made a couple of new series about Donald Trump last year, but I never thought he would be elected.”

Sanaz Mazinani’s new work, she says, is about how Trump’s “image and his identity and his awful words were proliferated because he was this presidential candidate, so there was this responsibility of the news media to cover him, even though there was this negative hate speech in what he was putting out there.”

A Legacy of Ongoing Islamophobia

Back on the northern side of the border, Somali-Canadian artist Abdi Osman—who lives in Toronto and has previously shown his work at Northwestern University in Chicago, done a residency at McColl Centre for Visual Arts in Charlotte, and given a talk at the University of Rochester—has decided to cancel a trip to visit galleries in Boston following the ban.

Osman’s work “focuses on questions of black masculinity as it intersects with Muslim and queer identities”—identities vulnerable not just now, but for many many years up till now, the artist notes.

“Profiling of Muslims, and Muslim men in particular, has been happening for a long time,” Osman says in an email. “The department [of homeland security] can’t even imagine a queer Muslim. In my Canadian passport, I have a 20-year visa so I can cross the border, and each time I cross, I’m taken to secondary for further questioning.”

When asked about his thoughts on the response of Canada’s and Toronto’s governments to the US travel ban—and the Islamophobic shooting at the Quebec City mosque—Osman was frank.

“The response coming from all government officials has been extremely weak to date, including that of the Prime Minister of Canada and the Mayor of Toronto, John Tory,” Osman writes. “They are rhetoric, and this Quebec shooting [points to] the fact that since 9/11, Canadian Muslims have experienced all kinds of violence.”

Toronto-based artist Sara Naimpour was born in Tehran, and her recent photographic project …all the news—exhibited at Birch Contemporary in 2016—dealt with the experiences of Iranian immigrants to the city.

Naimpour says she is deeply disturbed by recent events in the US and Canada, and their impact on Iran-born artists.

“What is devastating about the current [US] ban on Iranian nationals is that many Iranians, including artists, have been going through very long and hard processes over the past 30 years to gain a second citizenship to be able to move freely around the world,” and pursue the opportunities they seek, Naimpour writes in an email.

“After all that, you are hit by the realization that no matter what citizenship you hold, you can not fully enjoy the same privileges that your fellow citizens have. Just by virtue of the country of your birth, you are subjected to collective and unjust punishment,” Naimpour observes.

The travel ban ends up affecting artists in other ways, too Naimpour argues—it affects the art itself.

“Now, Iranian artists in the United States have to choose between Iran or US: if they choose Iran, they have to either depoliticize their art, self-censor, or keep a low profile to avoid facing any problems,” Naimpour writes. “On the other hand, for those who choose to stay in the United States, they are cut off from family and friends, sometimes their art inspiration, and their art practice can become isolated.”

Naimpour is also concerned that Iranian artists based in the US might also feel a “need to self-censor” in light of rising Islamophobia there.

And she is also concerned about the message the US travel ban sends to racists in Canada.

“In the past few days what has been really scary is hearing stories from friends and family, people just like me, whose lives have turned upside down just because they chose a wrong time (and destination) to travel.” Naimpour says. “I worry that with the rise of white supremacy and increased Islamophobia and xenophobia in the United States and around the world, white supremacists in Canada feel more justified to act out these sentiments.”