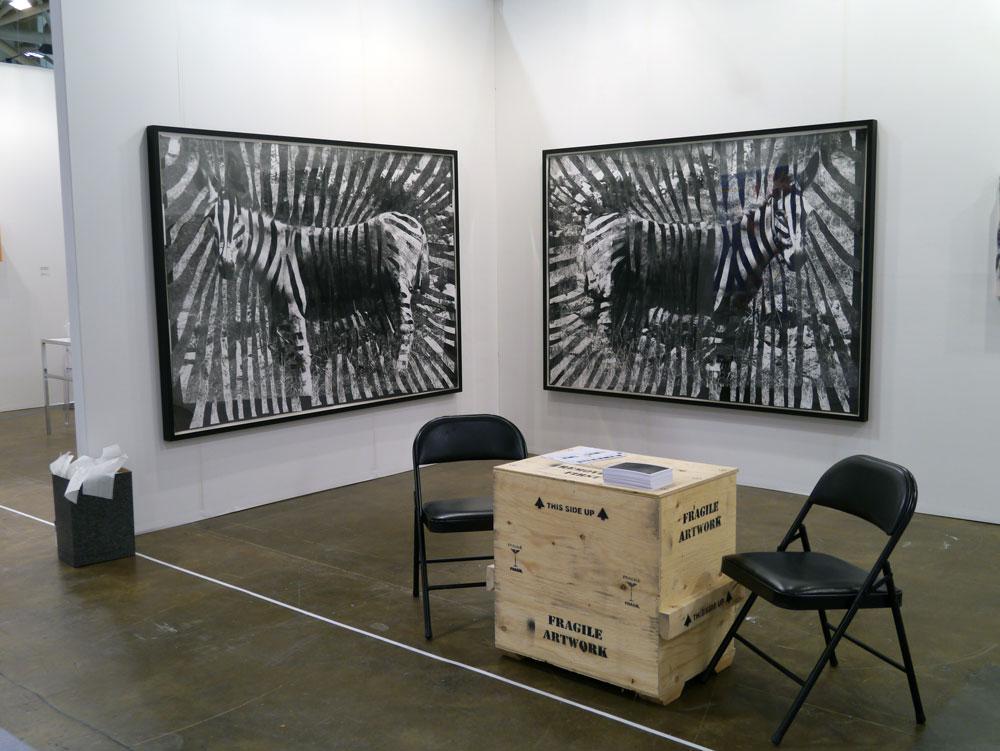 Though it is difficult to assess the exact value of sales at Art Toronto 2013, it was clear that many works did change hands. Last year, the fair reported an estimated $15 million in sales, and it has yet to release a figure for this year. Here are a few notes on selected publicly disclosed sales.

First, to recap some of the most-watched acquisitions at the fair, the AGO’s opening-night-preview buys consisted of works by Karel Funk (at Galerie Division), Anthony Burnham (at Galerie René Blouin), Celia Perrin Sidarous (at Parisian Laundry) and Shuvinai Ashoona (at Feheley Fine Arts).

As usual, corporate collectors made their presence felt at the fair. BMO, for instance, acquired two oil-and-acrylic paintings by Daniel Langevin at the booth of Galerie René Blouin, two photographs by Celia Perrin Sidarous from Parisian Laundry, and a Séripop print from Galerie Hugues Charbonneau. TD, among other works, acquired two paintings by Krisjanis Kaktins-Gorseline brought to the fair by Battat Contemporary. It also purchased one piece by Saimaiyu Akesuk from Feheley Fine Art and one piece by Ryan Sluggett from Trépanier Baer. Diana Thorneycroft‘s large-format photograph Lake O’Hara (Clark, Northern Dancer and the evil weasel) at the Michael Gibson booth sold to a major Canadian bank and her Christina’s World (gets turned upside down by Cpl. Dew Wright) sold to a Canadian investment company.

On the established Canadian contemporary artist front, Dean Baldwin‘s notable Piano Bar at the booth of Katharine Mulherin went to a private collector, and Mulherin reported sales of Balint Zsako drawings as well. Kent Monkman‘s new Urban Landscapes canvas bore a red dot at the booth of Pierre-François Ouellette during the opening-night preview. (Ouellette says he sold nearly 30 works at the fair for one of his best years there yet.) Trépanier Baer reported that Evan Penny’s attention-grabbing tribute to Arnaud Maggs also found a buyer, as did one of Luanne Martineau’s latest collage works. Angell Gallery sold at least two paintings by Kim Dorland, currently the subject of a survey at the McMichael Canadian Art Collection. Both of these were listed at $16,500. Daniel Faria Gallery sold the “zebra” prints by Shannon Bool with which it opened the fair, as well as a large wall work by Iris Haussler. Stephen Bulger Gallery sold a new work by Sarah Anne Johnson, Red Undies, from her just-debuted Wonderlust series, among other art pieces.

East-coast Canadian galleries reported sales for artists of that region as well. Newfoundland’s Christina Parker Gallery found buyers for works by Will Gill and Kym Greeley, among other artists, while Halifax’s Studio 21 sold out of the Sara MacCulloch paintings it brought.

Emerging artists were in the spotlight, too. Popular at the Galerie Hugues Charbonneau booth were minimalist works on paper by Tammi Campbell; all the Campbell works brought (two large and some ten smaller) sold out during the fair. Galerie Nicolas Robert reported selling out of works on paper by Simone Rochon and placing a number of Pierre Julien paintings as well. Drawings by Tristram Lansdowne and a large canvas by Matt Bahen sold at the booth of Le Gallery, while Wil Aballe found a buyer for an Evann Siebens video, among other works.

Some galleries used the fair as an opportunity to announce their new representation of some artists. For instance, Nicholas Metiver Gallery brought several prints by late American photographer Gordon Parks, for which it is now the sole Canadian dealer and is planning a related 2014 exhibition for the Contact Photography Festival. A number of these Parks prints found buyers. Georgia Scherman used the fair to debut her representation of Divya Mehra and Kelly Wallace, and she brought new, never-before-seen Suzy Lake photographs of the 1970s as well. Scherman reported selling multiple editions of Mehra’s neon signage work I Will Split Up My Father’s Empire (After N.W.A), as well as the Wallace drawing displayed, among other works.

Internationally speaking, MA2 Gallery from Tokyo indicated sales of several works by Ken Matsubara; Matsubara is due to have a solo show at Toronto’s Olga Korper Gallery in the coming year.

The National Gallery of Canada was also involved in an acquisitions process during the fair, but a spokesperson for the NGC said that details of what it purchased are not available at this time.

This article was corrected on November 1 and November 2, 2013. The original copy indicated that Kent Monkman’s large Urban Landscapes painting was priced at $50,000. This price pertained to smaller paintings by Monkman in another part of the PFOAC booth. The original copy also erred on the title of a Sarah Anne Johnson work sold. The correct title is Red Undies.