Three artists will be travelling, with shipping containers transformed into studios, across Canada to mark 150 years since confederation. 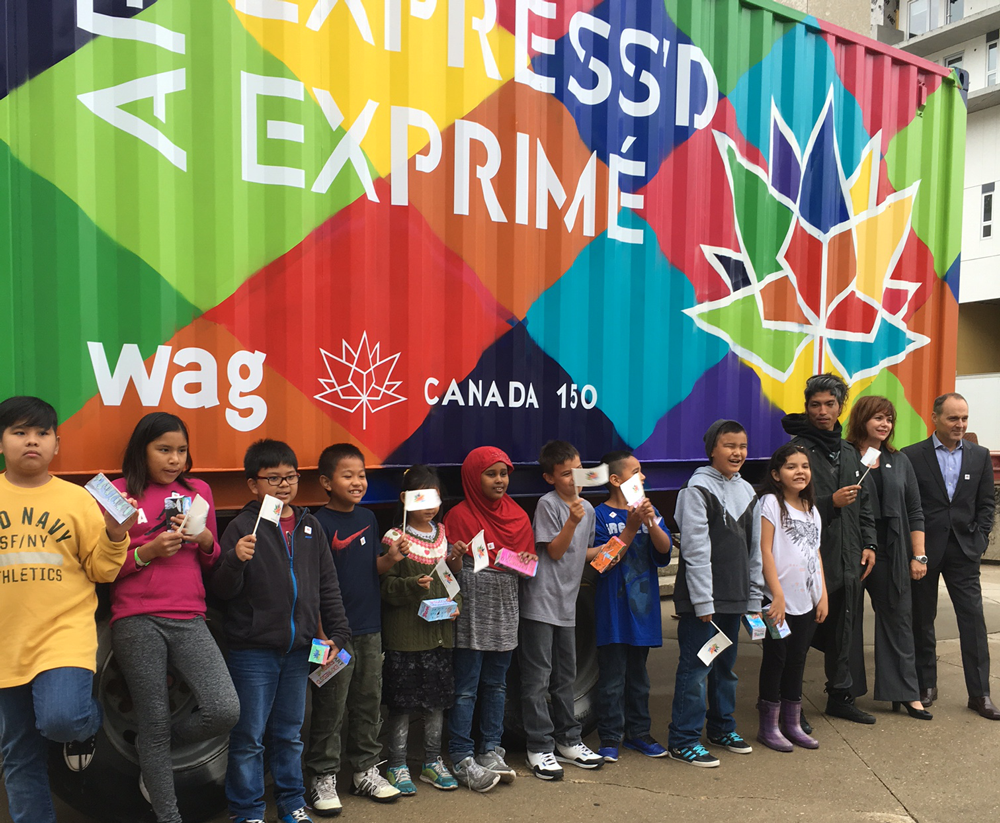 Three shipping containers transformed into mobile art studios will set out on routes across the country in June of next year, converging three months later in Winnipeg.

Each container will traverse a different route, beginning in the north, east or west, and will be the home base of a project by an emerging artist. The cross-country project is all to mark Canada’s sequicentennial.

Organized by the Winnipeg Art Gallery, Art Express’d is the only signature initiative project (supported by the federal government with a $300,000 grant) by a major gallery. And applications from artists for the project are being accepted until October 14.

“The story of dispersal and displacement of people, or goods, or even information, over the distances and the terrain, continues to define Canada,” says Rachel Baerg, the WAG’s head of education. “We thought, ‘Let’s highlight the country’s unique natural geography, highlight the linguistic and cultural diversity, and speak to the deep-rooted history of travel and transport and exploration.’”

And while the project aims to mark the 150 years since Canada’s confederation, it isn’t necessarily an uncritical look at our colonial history. As with all the Canada 150 signature initiatives, the pillars of reconciliation, youth, environment and community engagement are important to the project, and the WAG is explicitly aiming to achieve diverse representation.

“We feel this is a fantastic opportunity to create opportunity for counter-narratives, to look at different perspectives, to capture the broadest and most inclusive representation—including Indigenous peoples, different ethno-cultural communities, linguistic minority communities and youth,” says Baerg.

At this point, the routes are still provisional. But the plan is for each shipping container to make various stops, bringing the total number of communities included in the work to 15.

The southward route will, provisionally, begin in Inuvik and travel to Whitehorse, Yellowknife, Churchill and Rankin Inlet; the westward route will kick off in St. John’s, before travelling through Halifax, Charlottetown, Moncton, Montreal and Ottawa; and the eastward route will start in Vancouver, before visiting Alert Bay, Calgary and Saskatoon.

“It’s a very ambitious project, of course: the mobile art studios will traverse every province, every territory, and we’re going to be using train, truck and cargo ship,” says Baerg. “There will be four or five days of travel in between the different communities, but ultimately the three containers will converge in Winnipeg, the geographical centre of the country.”

Along the way, partnerships with other art galleries and community organizations will allow the participating artists to interact with the public.

“We will have partnerships, perhaps with senior homes, schools, maybe even a Walmart parking lot! We just really want the mobile art studios to be available for the public at large, and we want it to be very accessible,” says Baerg.

This move into off-site locations to better engage communities is not a new one for the WAG, which currently operates a retail location at the Forks in Winnpeg, and also organizes exhibitions in Assiniboine Park—but, of course, these projects are hardly on a national scale, which provides a new range of challenges.

“I think there has to be a sense of the adventure for the artist, there’s a little bit of the unknown that will play in this project, as well, which may be exciting to some of the artists—for some it may be a bit of a fear factor, as well. And so I think, because it is a collaborative piece, they will be engaging with thousands of Canadians on route. There has to be a sense of adventure, and a sense of letting go, of perhaps the final product, or the final creation.”

The three selected artists—who will be announced later this fall—will work first to transform their container into a format that’s appropriate for their project.

“The three containers may look different depending on what the artists’ visions are,” says Baerg. “Whether the container becomes a gallery, a mobile movie theatre, space for video or a photo gallery, there are many different possibilities. So we are asking the artist to come up with these ideas, and we will support them.”

And then they’ll travel with the shipping containers for three months—but they won’t be living in them.

“No, no,” laughs Baerg. “For the artists, we have hotels along the way, there will be lengths of the trip across Canada where the artists will be flying to different centres and meeting the container in different communities, but for some leg of the trip they might be travelling in a car beside the container, or inside the truck.”

And if it sounds like an adventure that you would be interested in, there’s still time to apply. The deadline for proposals has been moved to Friday, October 14. And the open-ended application places no limitations on media.

“We’re hoping that we’re going to have a group of adventurous artists who are interested in working together, with Canadians, to create something amazing.”