What’s the Value of First-Person Criticism?

Caoimhe Morgan-Feir and Leah Sandals debate the merits and limits of first-person criticism in art. 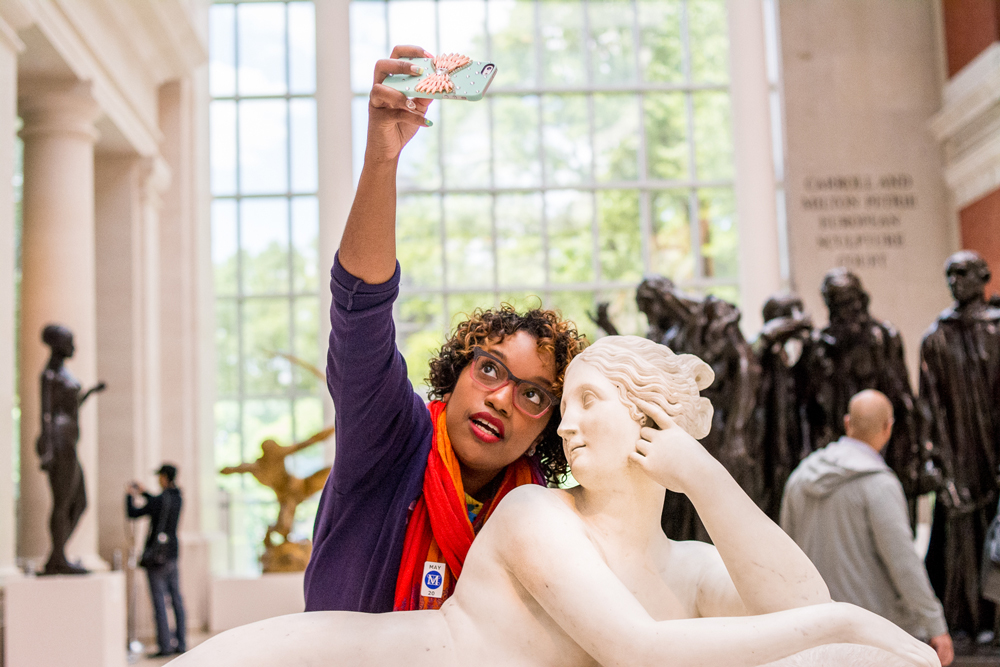 A participant in a Museum Hack tour takes a selfie in the American Wing of the Metropolitan Museum of Art in New York. Photo: Museum Hack and Winston Struye.

Caoimhe Morgan-Feir and Leah Sandals debate the merits and limits of first-person criticism in art.

The Danger of the First-Person Substitution

First-person criticism has been in the firing line of late. In an article published by the Walrus, Jason Guriel is particularly worried, seeing an epidemic of self-interested writers turning their reviews into confessionals, a tendency that Guriel paints as lazy and narcissistic at best, and downright manipulative at worst.

The piece, “I Don’t Care about Your Life,” was met with plenty of criticism, and a fair amount of derision, for reasons that are largely apparent. Any essay that rails against subjectivity in the name of a largely personal preference will be swiftly called out for hypocrisy, for one. (In Guriel’s defense, he describes his use of the personal pronoun as a convenience “meant to give voice to an argument as opposed to a person.”)

More importantly, though, as many (including a rejoinder in the Walrus) pointed out: the piece overlooks that subjective approaches to criticism allow for a broader inclusion of vantage points. As the field of criticism is no longer solely the terrain of white men, it makes sense that Modernist assumptions of objectivity are cast aside in favour of accounts that acknowledge specificity, and the influence that personal experience has on reading cultural texts.

Viewing art, like watching movies in a theatre or swimming laps, is a solitary act done in the presence of others. We might be occasionally tricked into thinking of art as communal, but make no mistake: no two people will leave an exhibition feeling the same way for the same reasons.

Yet while my own tendencies, in both writing and reading, lean towards the subjective, and occasionally the confessional (though I’ve never feigned anything less than a healthy dose of self-interest), I concede limits to the first-person approach. I don’t agree, or at least I don’t worry, that the first person indicates an unhealthy self-regard.

But when does direct experience begin to substitute imaginative empathy with a kind of shorthand? Used wrongly, first-person criticism offers an easy substitution: “I experienced this, so I understand and value this work.” And, taken to its most extreme, it demands a kind of essentialism, suggesting that, in order to have a meaningful relationship with a work of art, you, too, must have experienced this.

If the value of the first-person approach lies in its capacity for acknowledging, and celebrating, difference, its twin danger lies in lazy equivalence. At its most damaging, the confessional not only completes a reductive short circuit, but it also enforces a tyranny of the personal.

This risk is not the sole terrain of criticism, but writing more generally. “In many ways writing is the act of saying I, of imposing oneself upon other people, of saying listen to me, see it my way, change your mind,” writes Joan Didion. The trick is to avoid doing too much violence in the process.

My first-ever exercise in art writing was a first-person one: find a photograph that interests you, and fill a loose-leaf page with writing about it, longhand, stream of consciousness, about whatever it brings up.

Do I continue, 21 years later, to write in first person because I think it is the best way to write about art?

Not necessarily. There are many other ways to respond to artwork—ones that lean harder, often, on the academic and art-historical training I lack.

Also, news reportage is a third-person style I’ve used frequently, and it often feels appropriate as a frame when trying to highlight areas where other people (slash-interviewees) are offering in-depth expert opinion.

Further, the quality of any piece of art writing tends to depend more on the preciseness of its prose and perceptiveness of its author than point of view.

But I do think writing in first person about art—even if only for myself, in a journal, as a jumping-off point toward a more removed or impartial-seeming final text—offers one of the truest and most direct ways to examine my reactions to art.

(Do I always succeed in meeting such aspirations 100 per cent? Or even 50 per cent? No. But the device is still useful in trying to make progress on this front.)

I appreciate the way first-person voice can act as a bridge. When I go to galleries with friends or relatives whose interests lie, for the most part, outside of contemporary art, I tend to use first person in conversation—partly because I feel there is no better way to encourage someone else to attempt a reading of an artwork than by modelling or sharing how I am grappling my way through such a reading myself.

Also to this point: I like the way first person can sometimes slip and bump and slide around unwieldy, and often alienating, art jargon. It can challenge me to engage art without the terms insiders often put to use as a kind of crutch or shorthand.

Yet my affection for first-person voice isn’t all about attraction—I sometimes have problems with third-person approaches, and feel repelled by them.

The third-person POV was overused for many decades in art writings that pretended to be objective and impartial, but were often anything but. As a result, today, I sometimes have a dog-whistle reflex response to certain third-person POVs in art writing—just as I do at times when a person’s “judgment” or “taste” in art is criticized, “judgment” and “taste” often simply sounding to me to me like high-minded doublespeak for the more straightforward first-person sentiment of “I don’t like what that person likes.”

And despite being active in professional art writing since 2003, I also have difficulty with the idea of being an authority on anything, let alone art. So third person—the classic voice of art authority—is not a POV I am comfortable using.

As a result, I tend to prefer writing in first person, which reflects the only thing I could possibly be an authority on (and some days, even this can be tenuous): myself.

“Writing practice brings us back to the uniqueness of our own minds and an acceptance of it,” Natalie Goldberg writes. “We all have wild dreams, fantasies, and ordinary thoughts. Let us feel the texture of them and not be afraid of them.”