The Closer You Get: An Interview with Peter Doig 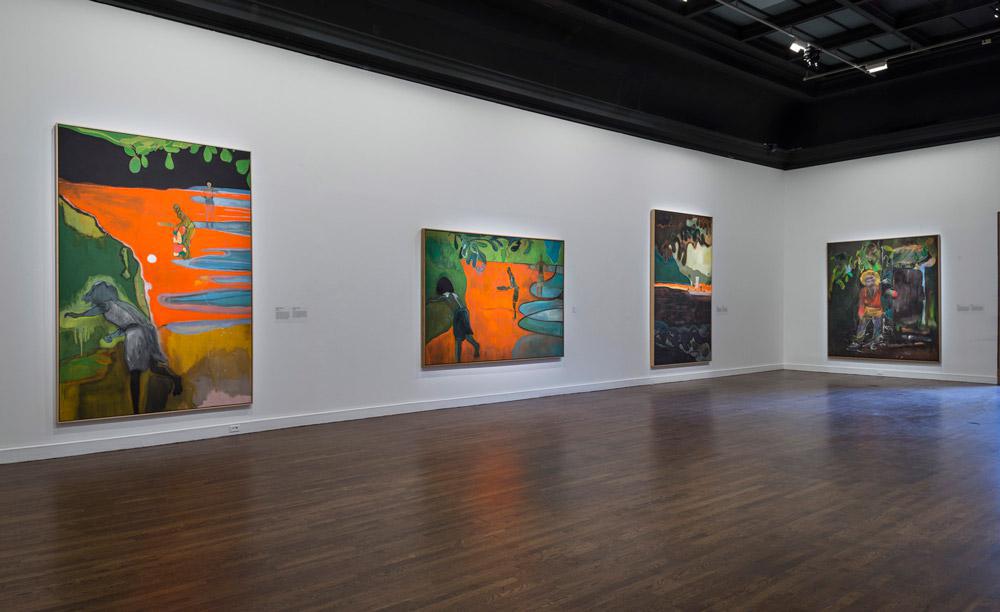 “Peter Doig: No Foreign Lands,” which opened last week at the Musée des beaux-arts de Montréal, surveys the acclaimed painter’s work since 2000, when he visited Trinidad and decided to move there from London. A co-production of the MBAM and the National Galleries of Scotland, the handsomely designed exhibition is the first important display of Doig’s art anywhere in North America, and his most expansive showing since a mid-career European retrospective in 2008. Here, Montreal painter Benjamin Klein joins writer John Bentley Mays to talk with Doig about influence, art criticism, fantasy and more.

Canadian Art: Let’s start by discussing the relationship to photography that your work initiated, and perhaps in a sense inaugurated in the 1990s—using the medium for starting-off points, but bending away from any obligation to it, away from the conceptual or photo-dependent arguments about painting that were common in the 1980s.

CA: In painting throughout the Postmodern period—in figuration especially, but also in a lot of abstract practice—there seems to be a kind of apology directed towards the nature of photographic imagery. It seems your work is independent of that whole discourse. You are just not ideologically bothered by it.

PD: I try to stay away from discourses, and make it up my own way. I was asked to describe my paintings once, and I said, “Think of a collage.” They are basically pieced together from things that I’ve seen, things I’ve remembered, even wallpaper I’ve seen, bits of things I’ve seen in other people’s paintings. At the same time, I don’t want my work to look like collage; I want it to look like something whole. Sometimes I use photography as…is it an armature that you have in a sculpture? It’s what holds the sculpture together. It gives us the sense that the work comes from the real world. Then I can go from there, really.

CA: One can’t experience your work without entering into the realm of belief, in a semi-spiritual or magical way. A kind of a transport takes place.

CA: What are you learning from your paintings?

PD: I’m questioning where I am in the world, where I live in the world, thinking about other people, thinking about their situations. I think what I am doing is important—not because painting is important. As an activity, it’s important to actually do something. I feel guilty if I’m not painting. Once you succumb to painting, you have to carry on with it. Gerhard Richter said something very interesting to me—I’m not a huge fan of Gerhard Richter’s work, but he said, if you think about it too much, you stop doing it. That’s a great way of thinking about painting. You have to put your blinkers on, and stop thinking.

CA: When Benjamin Buchloh interviewed Richter in the 1980s, without explaining himself at all, Richter also said, “Painting should be accomplishing more”.

PD: I think there’s quite a lot of unambitious painting these days. Painting is criticized a lot, and quite rightly, by critics and theoreticians because it’s not really doing anything. It should be doing something.

CA: What is that task?

PD: To make new paintings. Bring me subjects to paint, bring me new worlds to paint. That’s what artists have done throughout history. So much art is made about cliques within cliques, game playing. I’m so bored with that, really. Of course, these paintings are about game playing as well.

CA: But not an ideological game.

PD: No. It’s important that people outside painting can enjoy painting.

CA: Do you find the art world too intellectualized at this point?

PD: It’s interesting that you ask that, because so many people I know, so many artists, have basically stopped reading about art, in the way we used to read about art. Where do you read about art now? I haven’t opened up a copy of Artforum in years. I couldn’t tell you what the last cover of Artforum was. It seems like Vogue now—all adverts for galleries. I’m sure there are some interesting articles in it, but there was a time when artists were very concerned with what was being written about art, what important people had to say about art. I think that’s changing. People now go more on just seeing things. I feel like that. A lot of people feel like that. Then there’s the blog. Where is art criticism coming from? It’s coming from everyone. Being here in Montreal in the late 1980s, a lot of artists felt they were being completely left out of the discussion, so they went back to study theory. They were reading all the journals, learning a discourse, learning a language to talk about art. People can do whatever they want, but I don’t think that’s the right way to go about it, as a practitioner anyway. These things have to become a part of one’s work–your own opinions, your own attitudes.

PD: I like the fact that the closer you get, the less you get. The figures almost disappear as you get closer. The paintings are very empty, in a way, but that’s the quality I like in my paintings and in other people’s paintings. Openness is very important. I learned something important when I started teaching in Düsseldorf, about ten or twelve years ago now. There’s a level of finish in British art that’s very, very different from German art. When I was invited to come to Düsseldorf, I looked around the academy and I walked down the halls and I was quite shocked by the level of openness in the painting. There was a kind of abjectness about the way things were made. I found that quite difficult at first, but then I was very excited by it. I really wanted to come to the academy at that point. Just the way the students work—they have such a different attitude; they were so much less precious. That very much affected my own work. I became much more involved with paint.

CA: Much more involved with paint than what?

PD: I was always involved, but I could see a change, that’s what I’m saying.

CA: Are you referring to these transitional things that have happened in the work? 100 Years Ago functions very well in the show, because it provides a good example of what you had been working on before and also a starting point for the new direction.

PD: Chronologically, this painting should be part of the first room, because the paintings in the first room were actually made in London prior to moving to Trinidad. Then everything else happens afterward.

CA: But it’s an important painting.

PD: I had an exhibition, a small one, in the Saint Louis Art Museum, twelve years ago or so. They have this incredible Matisse painting. It’s his Les Demoiselles d’Avignon, done at the same time Picasso was doing his. It’s really one of the most radical, strange things I’d ever seen in my life. I’d never seen it in anything other than reproductions. You’re able to sit in front of it as long as you want. I was fascinated by the circles, the weird human figures, the non-narrative elements, the colours. It almost looked like a Diebenkorn.

CA: With respect to influence, relationships and the uncanny process of where certain things originate, some painters are really aware of the paintings that blew them away and set things going, and some are not. Do you think of particular paintings?

PD: There are some by unknown artists, some by well-known artists. Hopper is an artist I have always loved, but I dared not go where he went, because he’s so specific. And yet he’s a very open painter; he made very painterly paintings. I was always impressed by Hopper’s use of what was current—the clothes are of their own time. Those are the details that are really important for me. They don’t date, even though they belong to their own time.