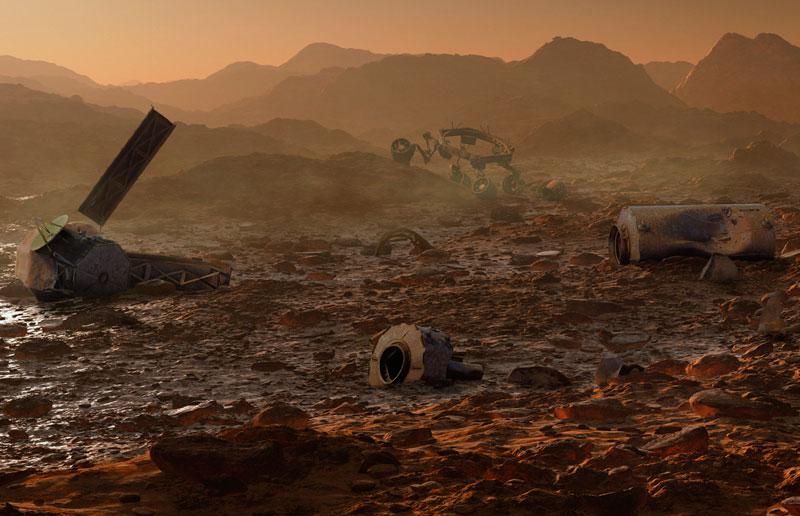 As part of the Future Projections program at this year’s Toronto International Film Festival, UK-based Canadian artist Kelly Richardson brought a scaled-down version of her amazing new work Mariner 9 to the Royal Ontario Museum. A panoramic video installation, Mariner 9 presents a detailed portrait of the surface of Mars as it might be seen in the future—littered with space junk, but still apparently uninhabited.

Commissioned by Tyneside Cinema in Newcastle, the TIFF installation offered North Americans a foretaste of the touring mid-career survey of Richardson’s work (also organized in the UK) that will arrive at Buffalo’s Albright-Knox Art Gallery in February 2013 and, in smaller form, at Vancouver’s Contemporary Art Gallery in 2014. This survey promises to be an event in itself, with eight rooms at the Albright-Knox to be taken over by her work. In this email interview, Richardson talks about the origins of Mariner 9, our fascination with life on Mars, and what that might mean for the future of life on Earth.

Rosemary Heather: There was an almost unnerving coincidence at seeing Mariner 9 in Toronto at the same time that NASA’s Curiosity was exploring Mars. It makes your project seem more real, almost as if you are doing the advance work—mapping the mental territory—for this new era in space exploration. Care to comment?

Kelly Richardson: The idea for Mariner 9 did come about before I became fully aware of when Curiosity would embark on its mission to the red planet. The opportunity I was given to develop the work was during a residency as part of Tyneside Cinema’s Pixel Palace program. The timing was perfect for the commission to be presented in parallel with the Mars mission.

Because of the unique problems the piece introduced, I spent the majority of time during my two-month residency researching and developing the various approaches I could take to produce the work so that, by the end of it, I would be ready for production to begin. Interestingly, by this point—the end of the residency and the beginning of the creation of Mariner 9—Curiosity had departed for Mars.

As we had planned to launch its UK exhibition within days of NASA’s anticipated landing, roughly eight months later, the work was produced entirely during the time it took for Curiosity to leave our planet and arrive on Mars: simultaneous missions. Mariner 9 premiered in the UK three days before NASA’s landing, and given that I had included Curiosity in the work itself, I was obviously thrilled when it landed successfully.

RH: One goal you’ve said you have for the work is to produce an immersive experience for your audience, which the installation delivers when presented at full scale, as it will be for your show at the Albright-Knox. Is it correct to say this effect in part derives from the authentic look you were able to give the piece? Can you also say something about the kind of research you had to do to achieve this look?

KR: I’d say the convincing Martian landscape certainly contributes to the immersive quality of the work. I wanted people to feel as if they could step onto Mars and I did overhear a number people in the UK telling one another that that’s exactly how it felt.

This is the first piece I have done that was entirely digitally produced. Usually I begin by filming existing locations, which I then alter digitally to create the work. However, as I couldn’t film on Mars I had to take a different approach.

I discovered that NASA knows exactly how Mars is constructed and that it had made this data available to the public, which could then be brought into a 3-D program to faithfully create the lay of the land. Using images of the surface of Mars taken from various rovers as a reference, I could then texture my digital version by creating similar rocks, sand, etc., to produce a photorealistic terrain. So that’s exactly what I endeavoured to do—and of course, it wasn’t nearly as straightforward as I’ve made it sound here.

I put a great deal of research into actual missions that had gone to the planet to recreate digitally the graveyard of partially functioning and corroding remains from various spacecraft you see in the work. And as it is a “futurescape” several centuries from now, I also researched current thinking about what future rovers may look like.

Lastly, I wanted the scene to be set during a dust storm, which is one of the most difficult effects to achieve in 3-D. Research aside, the skill set required for the whole of this work was huge. In the film industry, it would have required a large team of people. Two of us (my partner Mark Jobe and I) worked on the project full-time for 10 months. We basically started from scratch, as we had to learn several new programs and methods of working to achieve the desired look.

RH: I love the way, even when describing the project, you convey a sense of why it is so compelling to you—the recent Mars exploration adding extra urgency. I am wondering about the sound. You took great pains to include details that give the piece visual verisimilitude; is this true also of the soundtrack? I recently saw Christian Marclay’s The Clock and noticed how the sound from one segment will often carry on over top of subsequent clips, providing an element of continuity (along with the timepieces) to the artist’s otherwise disparate selection of movies. Can something analogous be said about Mariner 9? Is the soundtrack what makes it truly immersive?

KR: I’d say it’s equal parts visual to audio that makes the work immersive. The installation, at 43 feet by 9 feet, takes up far more than your immediate and peripheral fields of view. In fact, it’s so large that you really can’t take in the whole of the piece without physically moving around it.

In England, it was common to see people sitting in front of one area for a good while, and then relocating to another area for an equally long time. Holly Hughes, who is curating my mid-career survey at the Albright-Knox, also noted that when you walk around the work, the light changes as it would in front of a physical landscape and many people have noted how three-dimensional it looks, without the use of 3-D technology.

The sound does play a huge part in the immersive quality of Mariner 9, though. During my research I discovered that we don’t actually know what Mars sounds like. All attempts to record audio on Mars have failed so it’s mere speculation at this point as to how it would behave on the planet.

In lieu of this information, I created a soundtrack which, again, attempts to convince the viewer that they’re there, providing the tools for a suspension of disbelief. It is 5.1 surround sound, made up of a dust storm swirling around the room; faint, strange, rhythmic sounds; and mechanical sounds associated with the movement of spacecraft. The nature of the sound also reflects the function of the visual, which is both hypnotic and strangely beautiful, but equally unsettling.

RH: Finally, I guess the biggest question is, Why Mars? Aside from the current focus of American space exploration, are there other reasons this project took Mars as its subject?

KR: Over the last few years, I’ve been increasingly interested in the way science fiction allows us to experience what life might be like in the coming century. Scientists and futurologists can speculate on what the future might look like, but artists are capable of visualising those futures, making them tangible. If hindsight is always 20/20, experiencing these potential futures offers us a window through which we can view our present time and the direction we are headed in with some measure of clarity.

Mariner 9 presents Mars as littered with the rusting remains from various missions to the planet. Despite its suggested abandoned state, several of the spacecraft continue to partially function, doing their job to look for signs of life, and possibly transmitting the data back to no one.

That search for life—to know that we’re not alone in the universe—is fascinating on many levels, but it’s also a beautiful, endearing endeavour, particularly for us as a species. We are destroying much of life as we know it, literally consuming our planet, at a truly alarming rate. I’m interested in that contradiction at this critical time in history when current predictions for our future are not just unsettling, but terrifying.