This Artist Wants You to Adopt an Oil Well. Here’s Why. 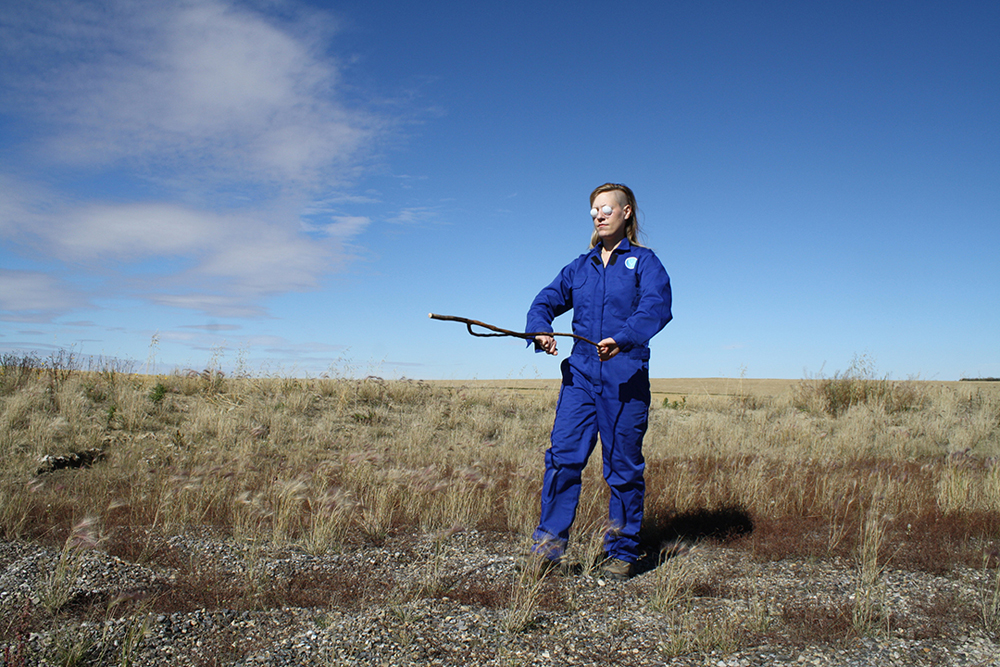 A field worker in the Orphan Well Adoption Agency, which is a project of Calgary artist Alana Bartol. Photo: Courtesy of the artist.

A view of the Orphan Well Adoption Agency “office” in Alana Bartol’s exhibition “In Blood and Bone”at Truck in Calgary. Photo: Courtesy of the artist.

An interior view of the Orphan Well Adoption Agency “office” in Alana Bartol’s exhibition “In Blood and Bone”at Truck in Calgary. Photo: Courtesy of the artist.

One of the inactive oil wells featured by the Orphan Well Adoption Agency. Photo: Courtesy of the artist.

An inactive oil well featured by the Orphan Well Adoption Agency. Photo: Courtesy of the artist.

Rusted with flaking paint. More than 20 feet tall. Solid steel with some moving parts. And in need of some care.

This might just be one of the scenarios you encounter if you apply to the Orphan Well Adoption Agency, a project by Calgary artist Alana Bartol.

Right now, the Orphan Well Adoption Agency has an off-site “office” at Truck art space in Calgary. It’s part of Bartol’s exhibition there, “In Blood and Bone,” with oil-well adoptions being facilitated throughout the exhibition. 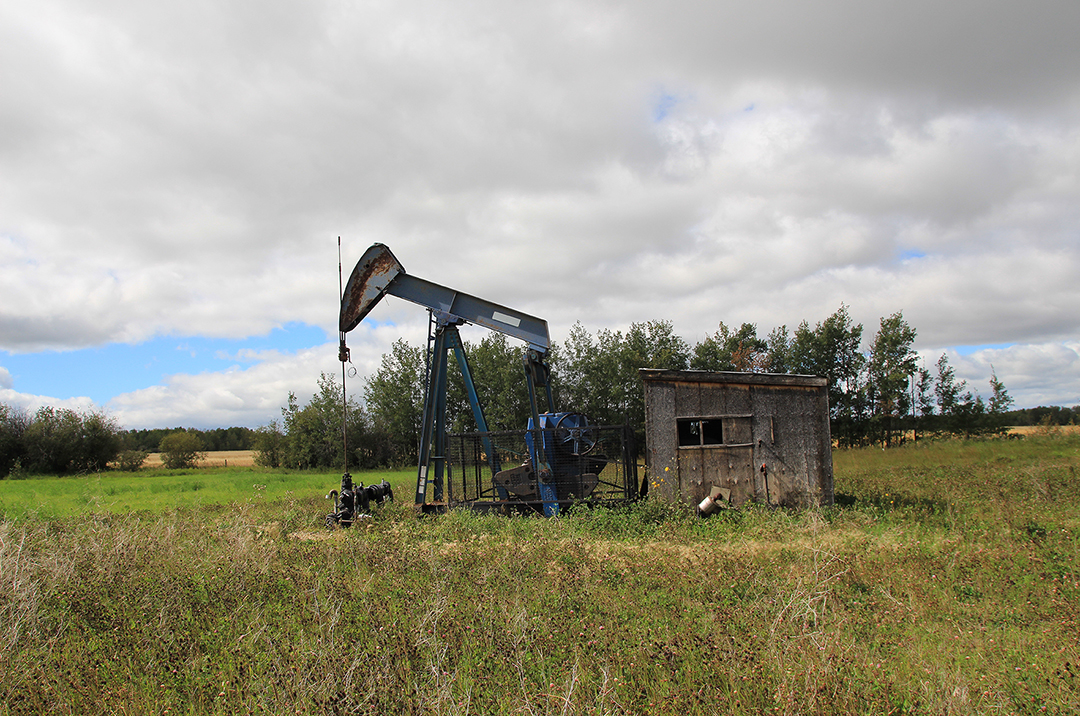 An inactive oil well featured by the Orphan Well Adoption Agency. Photo: Courtesy of the artist.

Q: What is an orphan well? It’s a term already in some use in Alberta, but what does it mean in this project?

A: I’m using the term “orphan well” in this project to talk about wells and related infrastructures that are inactive and have been abandoned by what might be thought of as their “parent” oil and gas company.

Q: Why are these wells, or other facilities, abandoned?

A: They are abandoned because the company may have gone bankrupt, or because the well is not producing anymore and they deem it inactive.

Usually, when a well is deemed inactive, there is a process of abandonment to take it through—but in some cases, there is no one to clean it up.

There is actually already a group called the Orphan Well Association, which is a non-profit organization that’s an extended arm of the Alberta Energy Regulator. They go in and assess the site and deal with all the reclamation and remediation process. 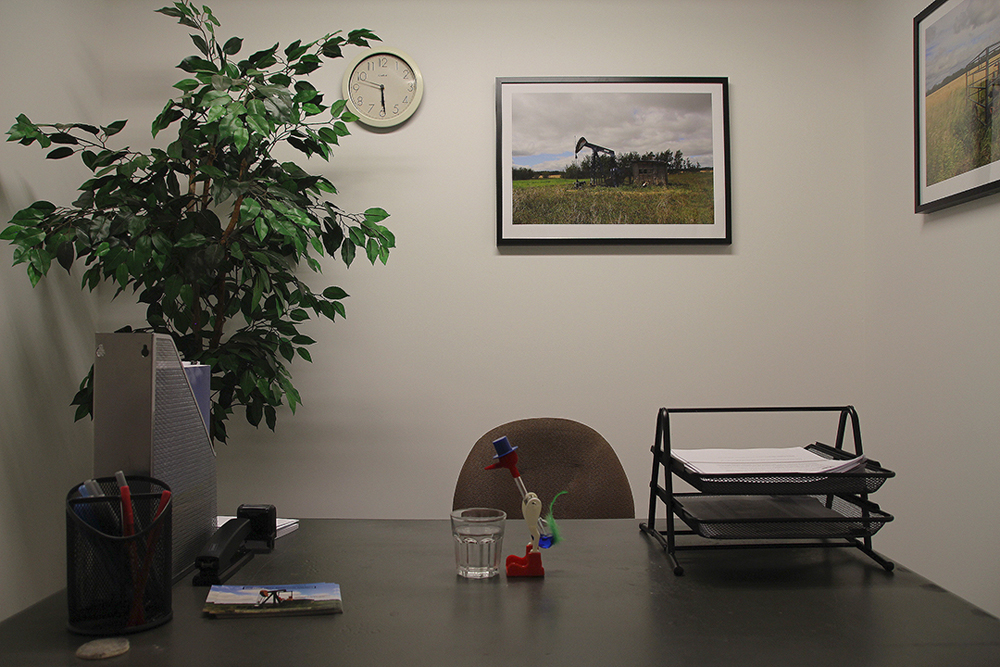 An interior view of the Orphan Well Adoption Agency “office” in Alana Bartol’s exhibition “In Blood and Bone”at Truck in Calgary. Photo: Courtesy of the artist.

Q: But there are still thousands of inactive oil wells that Orphan Well Association never gets to treating. Is that why you started the Orphan Well Adoption Agency?

A: The Orphan Well Adoption Agency is an organization that is really dedicated to helping these orphan wells find caretakers.

It facilitates symbolic adoptions—much like you would “adopt” an endangered species, you can “adopt” an orphan well.

In the current offsite office for the agency at Truck, we have people who will talk to visitors about the wells and how to adopt them.

Q: What do people have to go through to adopt a well?

A: You go through about 15 questions—it usually takes anywhere from 30 to 45 minutes.

The questions really centre around what does it mean to be a caretaker: asking people what care means in their own lives and examining notions of care that might extend to these orphan wells.

For example, the questionnaire asks about your experience as a caretaker—and this can be in any capacity, it doesn’t have to be oil and gas. It could be experience taking care of children or pets or people or spaces.

And it also asks, If you have adopted an oil well in the past, how did that go? 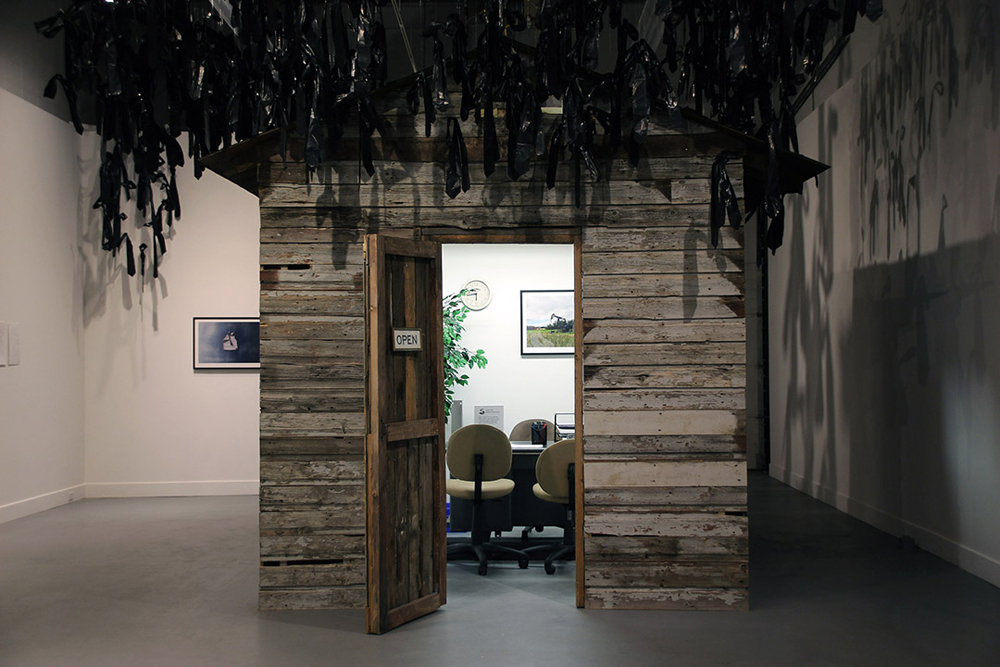 A further-back view of the Orphan Well Adoption Agency “office” in Alana Bartol’s exhibition “In Blood and Bone”at Truck in Calgary. Photo: Courtesy of the artist.

A: When you become a caretaker, you are not asked to go out and remediate the well site.

We actually advise against going to the well site, because they can actually be quite dangerous. It could even be trespassing, it could be illegal, because someone else might still have title to the land.

But you can receive correspondence from your well. And you get a photo and an adoption certificate.

Q: How can an oil well “write” correspondence to the adopter?

A: Well, we have field workers that go out to the orphan well site, and they use unconventional technology to attempt to receive information from the wells themselves.

So, for example, in part of the Truck exhibition, there’s a video showing one of these field workers using dowsing or divining as a way to receive information an orphaned oil well site.

And we have letters that field workers have created, almost like transcripts from dowsing at the site. That’s what gets sent to the people who go through the adoption process. 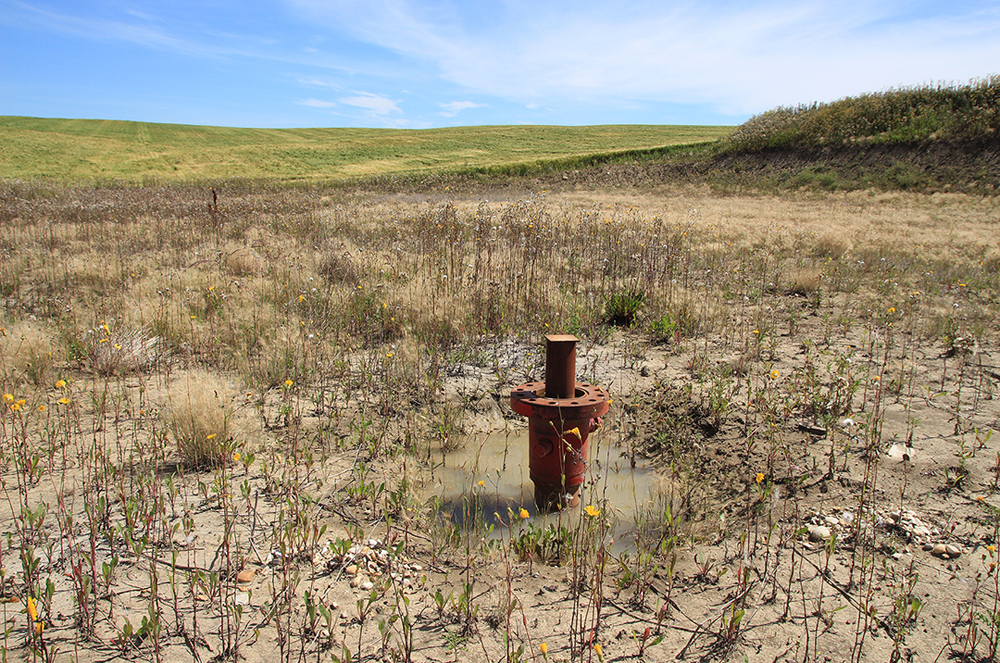 One of the inactive oil wells featured by the Orphan Well Adoption Agency. Photo: Courtesy of the artist.

Q: So if the adoption is largely symbolic, and there is already a government-related group that is meant to take care of orphan wells, what do you hope comes out of this adoption agency?

A: I hope that the adoption process allows people to think about the issue in another way. Some people aren’t even aware of orphan wells, so I hope this at least builds awareness.

I am hoping the project will spread out in various ways, too: not only through the website and social media and pop-up offices, but also through the people that become caretakers.

Those people really have to grapple with the question, What does adoption really mean if I can’t go and see my well? And if I can’t visit my well, how do I think about this notion of caretaking within this context?

Orphan wells and abandoned oil facilities in general are a matter that is being addressed like the legal sphere and the economic sphere. But these spheres are not addressing the emotional impacts.

There is this expansive network under the ground of pipes and infrastructure, and even if it’s not contaminating groundwater or soil, how is that altering the landscape? What do we feel about it? And what are we going to do to really address these issues?

If we look at how we want to extract natural resources and utilize them, then we are all implicated in [things like orphan wells]. There is nobody who isn’t implicated.

So the Orphan Well Adoption Agency is about trying to have these conversations in a different way—and maybe with a little humour, too.

Alana Bartol’s Orphan Well Adoption Agency will have an office until October 14 at Truck in Calgary. After that, it will still be accessible online at www.orphanwelladoptionagency.com.