Madelyne Beckles playfully takes the solemnity of second-wave feminist theory and redeploys it to poke fun at art history and popular culture. “The only things I had available to me when I started to make art were my body and my webcam and my phone and objects around my house, so that has informed the installation, the performance and the video aspects of my work,” the artist explains.

Beckles studied art history and women’s studies and attempts to ground the rigorous theory she learned into her own practice. “I try to make new contexts for that text or that work, through either my body in a space or [by] creating different environments through installation and video.” Last fall she presented a collaborative performance with Petra Collins at the MoMA Pop Rally titled In Search of Us. The three-hour tableau vivant featured three women of colour and was loosely based on Manet’s Olympia, after the critic Lorraine O’Grady’s 1992 essay “Olympia’s Maid: Reclaiming Black Female Subjectivity.” As in other projects, Beckles uses performance to restage moments in canonical art history and centre those who have traditionally been relegated to the margins.

In several of her webcam videos she uses her own body to perform parodies of typical webcam girls and their contemporary woke counterparts. Theory of a Young Girl, for example, opens with the artist dressed in pink in front of a pink background. In roughly edited shots, the video uses the format of the after-school special and the self-help video to make fun of feminine conventions of prepubescence. “The young girl originates in the failure of feminism,” she tells us as the camera pans over an arrangement of pink objects. She paints her nails pink on a pink binder labeled “THEORY” over a pink background. “I’m so happy I could give a shit about being free!” she continues with mock enthusiasm to a dull, ambient soundtrack.

In this video, the artist invites us into the Feminist Art Gallery, which she uses part-time as a studio, as she prepares for her her current exhibition Arrangements in Gallery 44’s vitrines. 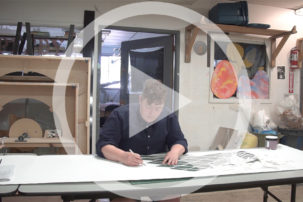