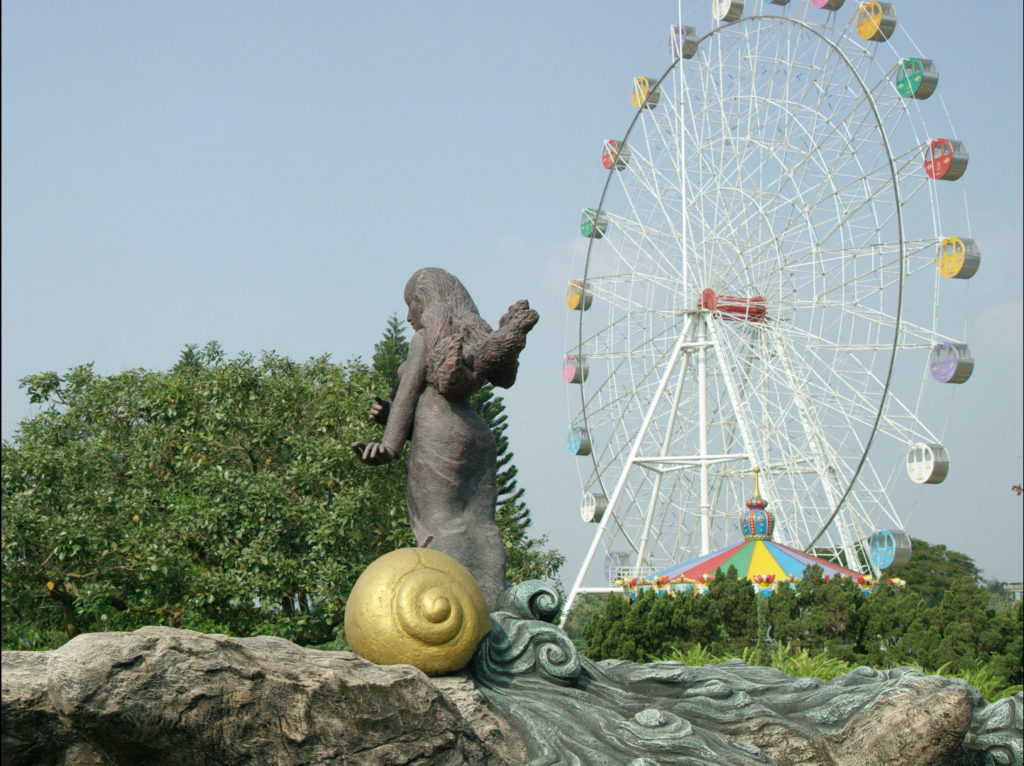 Film has long negotiated a complex relationship with questions of scale. As blockbuster film budgets continue to inflate and cinemas eternally seek ways to amplify the audience experience through enhanced sound, larger screens or other novelties (with 3D film experiences now accented by extra “dimensions”—more than one can count on two hands), in certain contexts a film’s scale has come to be seen in inverse proportion to its artistic merit. Such developments have in turn lead to an equally reductive valourizing of small-scale or artisanal filmmaking as work of integrity and value. All of this makes “Outer Worlds” (also known as “XL Outer Worlds”) a refreshing intervention in an increasingly distant and rigid dichotomy. Instigated and curated by Janine Marchessault with film producer Christian Kroitor, the touring project consists of commissioned IMAX short films by artists Oliver Husain, Lisa Jackson, Kelly Richardson, Michael Snow and Leila Sujir, all of which push the experimental boundaries of a medium most often reserved for commercial action cinema.

“The idea was to give artists access to large-format film,” Marchessault stated matter-of-factly by way of introduction at the project’s recent world premiere as the closing-night event of the 2019 Images Festival. (Future screenings are planned for Victoria, Sudbury, Edmonton and Montreal.) Produced with access to advanced digital equipment and technologies like IMAX 3D, the individual projects occasionally gestured to the unspoken spectacle of contemporary narrative cinema, but just as often reflected on past histories of IMAX film, both as a technology and as a trademark.

Such connections were explicitly evoked by the choice of venue: the Cinesphere, located on the grounds of Toronto’s waterfront Ontario Place. Designed by Eberhard Zeidler and constructed in 1971 as the world’s first dedicated IMAX cinema, for decades the geodesic-like dome exhibited IMAX productions, and continues to screen recent films in the format. The venue’s history, including its inaugural screening of Graeme Ferguson’s North of Superior (1971), with its iconic opening moments shot from a soaring plane, seemed to inform the projects in “Outer Worlds,” whether they were drone shots of Leila Sujir’s Aerial (2019) or the shifting horizons of Michael Snow’s Cityscape (2019).

Earlier points of reference for both the films in “Outer Worlds” and the Cinesphere itself include the large-scale artist projects that animated Canada’s centennial celebrations in 1967, which gathered ambitious multi-screen works, expanded cinema performances and other unconventional film installations presented in custom-built pavilions as part of Expo 67 in Montreal. Chief among them was the National Film Board of Canada–produced In the Labyrinth (1967), a multi-screen, multi-theatre film work directed by Roman Kroitor (Christian Kroitor’s grandfather), Colin Low and Hugh O’Connor, and featuring footage drawn from a mix of 35mm and 70mm film stock. Kroiter, along with fellow filmmakers Graeme Ferguson and Robert Kerr, and engineer William C. Shaw, established the IMAX Corporation a year later as a company for experimentation in large-scale film production and exhibition, later debuting the technology at the 1970 Expo in Osaka.

The five new works for “Outer Worlds” may not have used traditional 70mm film stock, but they do share the format’s signature 1.43 aspect ratio, not to mention the enthusiasm for experimentation that characterizes early IMAX productions, which seized the potential afforded by increased technological speed, resolution and mobility.

During the post-screening discussion at the Images Festival premiere, Marchessault noted that the filmmakers worked independently of each other on their projects, which perhaps explains the extraordinary fact that two of the five artists took inspiration from the same location, namely the verdant unceded traditional territory of the Pacheedaht First Nation, on the southern tip of Vancouver Island.

Kelly Richardson’s Embers and the Giants (2019) was the most reduced of the films shot on Vancouver Island, offering a single, fixed view of a gargantuan tree that forms part of the region’s Avatar Grove old-growth forest. Over the film’s seven minutes, the tree trunk—which managed to match the grandeur of the Cinesphere screen—was gradually encircled by a host of (digitally rendered) fireflies that swelled from a lone itinerant beam into a full swarm. During the group Q&A after the screening, Richardson spoke of the work in terms of conservation and advocacy, noting threats to the forest at the hands of developers and the need to amplify nature in order to convince the public of its worth. That the extraordinary natural-growth forest, which provided a backdrop for the film’s subtle spectacle, shared a name with and invoked James Cameron’s earlier sci-fi spectacle, also released in IMAX 3D, was surely not lost on the filmmaker nor curator.

Leila Sujir’s Aerial offers a portrait of the lush region from a variety of perspectives, including shots inspired by the movements of a hummingbird that zigzags through and above the forest trees and rivers. Where Richardson’s contribution emphasizes the contemplative, Sujar’s kinetic short seems most interested in the dynamic potential for montage, with the film punctuating footage of the forest with shots of abstract representations of tree farm licences placing the domain at risk of harvest.

Despite the project title “Outer Worlds,” the majority of the films produced focused on the natural environment, with varying degrees of homage to the educational IMAX science films of earlier decades. Two of the most impressive contributions—Lisa Jackson’s Lichen (2019) and Oliver Husain’s Garden of the Legend of the Golden Snail (2019)—further situate their work in the context of earlier films through their use of voice-over and 3D images.

Seemingly in response to the questions of scale that surrounded and informed the project, Jackson’s remarkable Lichen consisted of close-up footage of the composite organisms, accompanied at first by the fluttery compositions of Japanese ambient composer Hiroshi Yoshimura before being supplemented by the voice of self-taught lichen specialist Trevor Goward. Shot in a darkened studio where the specimens were accented by impressionistic movements that produced the effect of passing planets, the tiniest objects of inquiry here became the most cosmic and otherworldly.

Husain’s Garden of the Legend of the Golden Snail offered a similar, even more playful engagement with questions of macro and micro. Taking the Cinesphere as a starting point (with a plastic-straw replica of the building making a cameo in the film), Husain’s project begins with an examination of other cinemas built for IMAX film, leading to the still-operational Keong Emas (or Golden Snail) cinema in Jakarta, Indonesia, which for several years in the 1980s and 1990s retained the honour of being the largest film screen in the world. Incorporating 3D footage of a real golden snail, a slightly tongue-in-cheek voice-over recounts a famous Indonesian fairy tale about a princess who is magically transformed into the slimy gastropod, while elsewhere detailing the history of the domestic introduction and promotion of the golden Apple Snail as a new and advanced source of protein.

Described as an “elaboration” on his iconic abstract landscape film La Région Centrale (1971), which debuted the same year as the Cinesphere, Michael Snow’s Cityscape (2019) again worked with a mechanically augmented camera apparatus in order to free its movements from the hands of the filmmaker. As part of the post-screening discussion, Snow recounted how upon the initial release of La Région Centrale, IMAX co-founder Graeme Ferguson approached and encouraged Snow to make a follow-up to the film using IMAX technology, a prompt now realized almost five decades later, and which Ferguson was in attendance to see. Filmed from the Toronto Islands, Cityscape begins with a shot, trained upward to the sky, that gradually tilts down to reveal the spindle of the CN Tower, the city’s skyline and Lake Ontario. The pleasures of being carried away by Snow’s apparatus risk reduction by a detailing of their dizzying pans, rotations and other motions, but the shifting speeds, sense of depth and percussive score experienced on the scale of screen like the Cinesphere’s proved that the artist continues to disorient his audience and gleefully test the limits of perception. While several of the films in “Outer Worlds” opted to gaze downward, at the wonder of plants and animals, it seems appropriate that Snow’s film starts and ends with its perspective directed upward, calling to mind the evocative title of a past IMAX film produced in the early 1990s: Reach for the Sky. 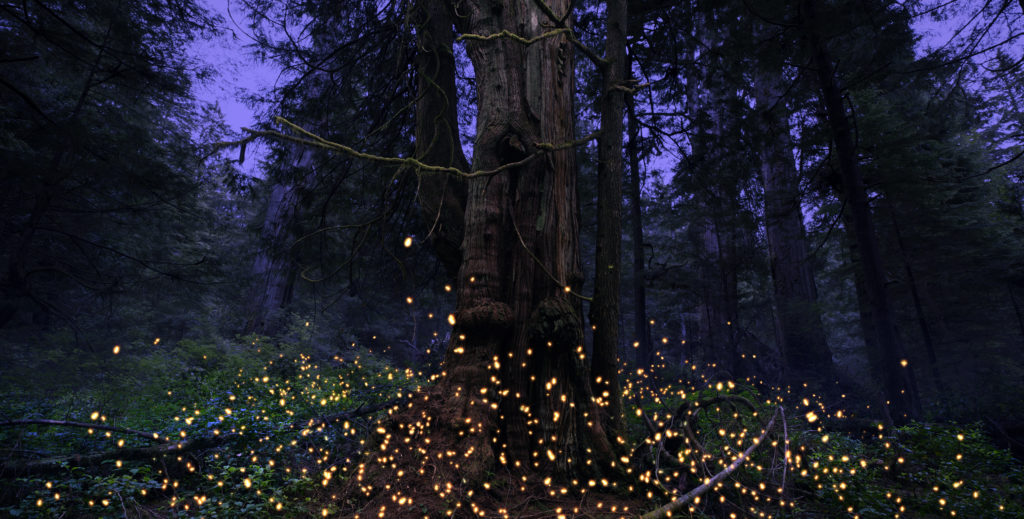 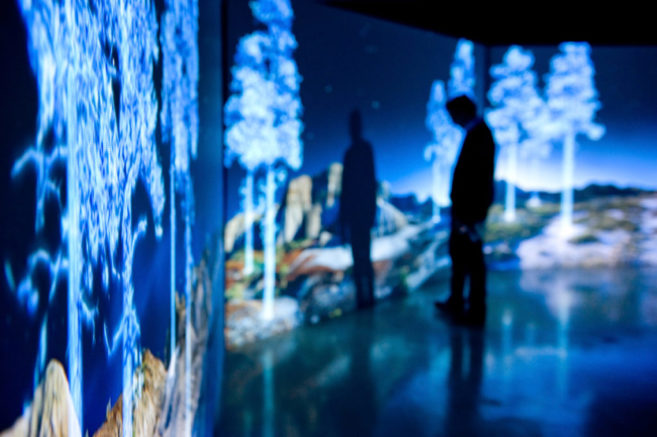 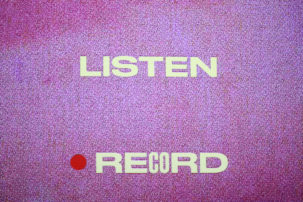 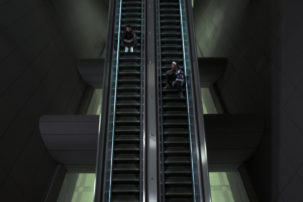 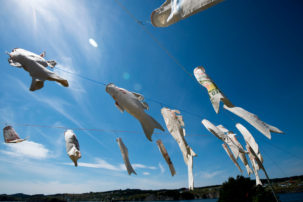 Spread over 50 kilometres of rugged coastline, the Bonavista Biennale aims to create a unique combination of art, people and place.