A four-day strike, planned to coincide with a major performance-art event, ended after a tentative agreement was reached 24 hours in. Negotiations resume December 17 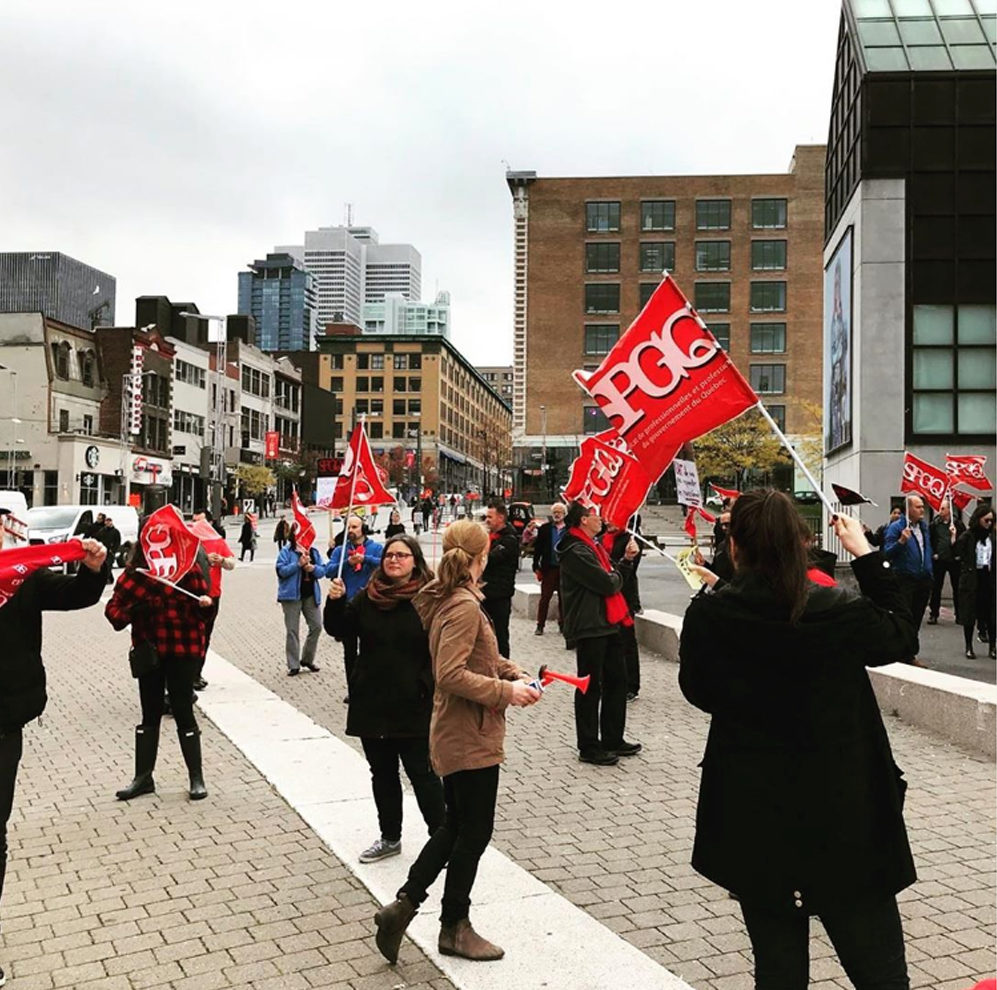 For several weeks now—since October 3, to be exact—curators, registrars, educators, information workers and other professional staff at the Musée d’art contemporain de Montreal have been advocating for improvements to labour conditions.

After five years without a collective agreement at the provincial crown corporation, museum staff (members of the Syndicat de professionnelles et professionnels du gouvernement du Québec, or SPGQ) voted for a strike mandate in early October, then held a one-day strike on October 30—the same day as a major exhibition opening at the museum.

According to the workers, these actions were met with silence and inertia, prompting the announcement of a longer, four-day strike from November 19 to 22—coinciding with “EMERGE,” a series of performance-art workshops, lectures and actions featuring leading Canadian and European artists, produced in collaboration with the Goethe-Institut and numerous European embassies and consulates.

Even before the November strike began, artists participating in “EMERGE” voiced their support for workers.

On Twitter, “EMERGE” artist Bridget Moser wrote: “I am deeply frustrated [and] angry at the management of the Musée d’art contemporain de Montréal for creating a situation where [I] get to have the wretched anxiety of making new work without the continuity of support from curators I’ve been working with who must go on strike.”

Didier Morelli, another participating artist, posted on Instagram encouraging attendees to support the staff on strike.

Late on November 19, however, the museum, the provincial treasury and the professional-staff union members reached a tentative agreement, or as an SPGQ staff member has put it, “an agreement in principle.”

To many, this was good news: “EMERGE” unfolded, mostly, as planned.

Yet it remains unclear whether labour concerns at one of Canada’s most prominent art museums have been truly resolved. Currently, negotiations are on a break, set to resume on December 17 on non-monetary issues.

Yves Théoret, deputy director at the Musée d’art contemporain de Montréal, told Canadian Art that the museum is committed to reaching a new long-term deal: “The MAC would like to reaffirm its unwavering commitment to reach a negotiated collective agreement in the best interest of all parties.”

MAC curator and union member Mark Lanctôt said on Instagram that the tentative agreement shifted nine jobs from temporary to permanent—addressing union concerns that around half of its members have long been on temporary contracts without benefits, insurance coverage or vacation time. The tentative agreement, he said, also provides salary increases “comparable to those granted to other national museums” (low wages are one of the main reasons cited for the strike action).

Jean Auclair, a representative for Quebec’s provincial treasury board (Secrétariat du Conseil du trésor), says the board supports the negotiations as well: “The Treasury Board Secretariat supported the Museum in this negotiation process, after having convened with the existing team,” Auclair states via email. “The monetary agreement was presented to the employees and they agreed to end the strike. The parties must agree on the final normative elements and final texts for the signing of the collective agreement.”

Nevertheless, museum staff still have reservations about the process. “What we’re realizing more and more,” Lanctôt says, “is that…everything seems to be in the treasury board’s lap.”

Lanctôt added: “Bear in mind that an agreement in principle was reached to put an end to the strike. And we managed to obtain some important gains. But that doesn’t necessarily mean what was offered to end the strike will make it into the common agreement as is. I’m confident our members will vote it in but, in the meantime, negotiations continue.”

Some of the artists in “EMERGE” are now responding to that new reality.

“I was disappointed to learn that the temporary agreement didn’t meet some of the very basic needs for which [the workers] were striking,” said Bridget Moser via email. “I would have preferred to say so to the museum’s management in person, but unfortunately they were either not present or chose not to make their attendance known” during “EMERGE” itself.

“I continue to fully support efforts by the curatorial and professional staff at the museum in their demands,” said Didier Morelli via email. “I am glad the strike yielded results.”

And yet strike action at the MAC may not be over yet: the workers still have eight remaining strike days to deploy moving forward, should they deem it necessary.