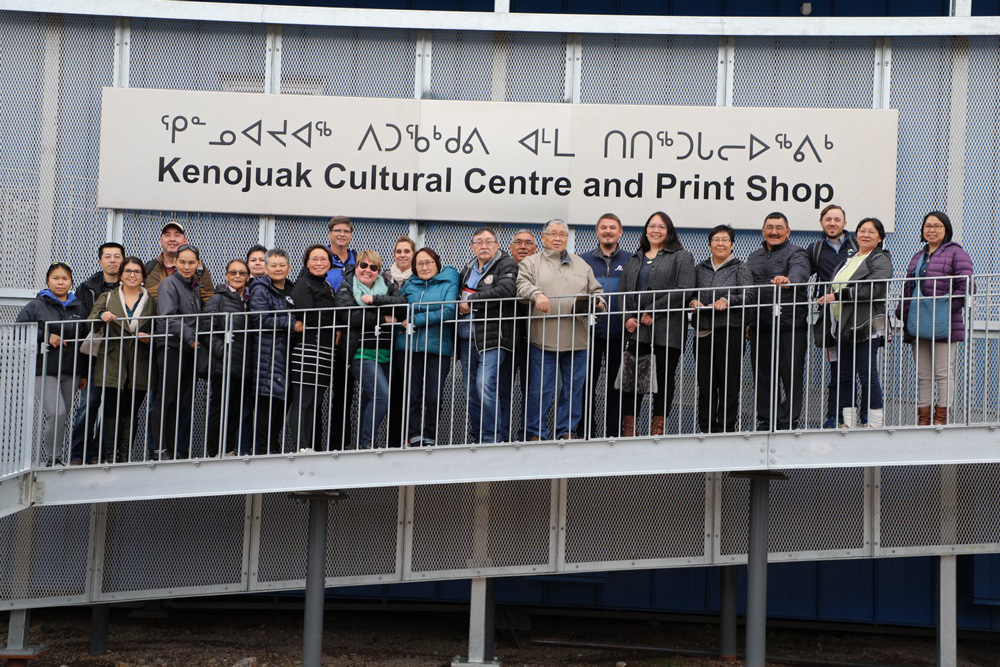 The Kenojuak Cultural Centre has officially opened its doors in Cape Dorset. The opening to the public took place September 5. This community facility, visitor destination and exhibition space is also the new home to Kinngait Studios. A public-private capital campaign generated more than $13 million for the project. (website)

The Avataq Cultural Institute and the Montreal Museum of Fine Arts begin a new collaboration. The two institutions have reached an agreement in principle to build a long-term partnership that will include Avataq’s forthcoming move into buildings owned by the museum. Founded in 1980 and established in Inukjuak, the Avataq Cultural Institute focuses on Nunavik Inuit culture and holds 300,000 heritage objects including artefacts, artworks and objects; Josepi Padlayat, Avataq president, called the Montreal initiative “home to an Inuit cultural embassy” in a release. Museum director Nathalie Bondil said that the museum will “be undertaking renovations to accommodate our expanding Inuit art collection.” The building agreement is a 30-year lease contingent on improving the museum’s buildings. (website)

The Ottawa Art Gallery has announced a new partnership with the Canadian Film Institute. Under the new agreement, the OAG will serve as the new home to the Ottawa International Animation Festival, EU Film Festival and the Latin American Film Festival. On September 29 the Ottawa International Animation Festival will host an event at the OAG called Night Owl, an interactive party. The OAG’s Alma Duncan Salon, which will host the screenings, is a 4,000-square-foot, multipurpose and event space with state-of-the-art digital and analog projection capability. It is named after Alma Duncan (1917–2004), an artist and animator who worked in the Ottawa region for most of her 60-year career. (press release)

And in case you missed it: The Mackenzie Art Gallery has received a $25 million anonymous donation. The donation will make possible the growth of Indigenous art programs and fund a new director of programs position. (Canadian Art)

The Hnatyshyn Foundation Awards were released this week. Among the big winners were artist Maria Hupfield and curator Daina Warren. Read our news story for full details. (Canadian Art)

Becca Taylor has been awarded the Dr. Joane Cardinal-Schubert Fellowship for Indigenous Curators. The award, from the Alberta Foundation of the Arts, is a one-time fellowship “designed to support the growth and development of curatorial talent and enhance representation of Indigenous artists in the AFA collection. This fellowship will provide an opportunity for the recipient to research and work with Indigenous artists and potentially increase representation in the AFA collection through curatorial acquisition,” says a release. Taylor, based in Edmonton, is core member of Ociciwan Contemporary Art Collective. (press release)

Margaux Williamson has received a MacDowell Fellowship. “The MacDowell Colony in Peterborough, New Hampshire, has announced the eighty-seven artists receiving fall and winter fellowships,” Artforum reports. “While [in] residence, fellows are provided with a private studio for a period of up to eight weeks, accommodations, and three meals a day. Each fellowship is valued at around $10,000.” Williamson is a painter based in Toronto. (Artforum)

Jude Griebel has been nominated for a 2018 Rema Hort Mann Foundation Emerging Artist Grant. The list of more than 50 New York nominees was released this week. The final eight artists selected will each be awarded an unrestricted grant of $10,000 to support their work. Griebel works between rural Alberta and Brooklyn, and is a graduate of Concordia University and Emily Carr University of Art and Design. (website)

The winners of this year’s Canadian Art Writing Prize have been announced. Camille Georgeson-Usher of Toronto is the first-place winner; she will be commissioned to write a feature story for a future issue of Canadian Art and will receive a $3,000 award. The two runners-up for this year’s prize are Phanuel Antwi of Vancouver and Corinna Wollf of Saskatoon. Each will receive recognition in the magazine and a $1,000 award. (Canadian Art)

Two significant new public art installations are worth a look in Calgary. As Galleries West reports, “One is an outdoor sound and light installation, Herald / Harbinger, by Ben Rubin and Jer Thorp. The other takes the form of a gridded interior wall sculpture, The Forest and The Trees, by Micah Lexier.” The report details that these works are located in Brookfield Place, a new 56-storey downtown office tower. Herald / Harbinger is “based on data collected and transported electronically from the Bow Glacier in Banff National Park,” while “the source of the tile designs” in The Forest and The Trees “is a series of black-and-white cross-stitch patterns of flowers from a book [Lexier] found in a secondhand store.” (Galleries West)

There’s a large new sculpture by Shary Boyle outside the Gardiner Museum in Toronto. Cracked Wheat is the winner of the museum’s 2016 public sculpture competition, and was officially unveiled August 29. The piece references the Japanese ceramic tradition of kintsugi, or repairing cracked vessels with gold. (Twitter)

Longtime Halifax dealer Studio 21 is moving to a new (and kind of old) location. The gallery will reopen at 5431 Doyle Street. According to a relase, Doyle Street “was the first location for Studio 21 when the founder and former owner Ineke Graham started the gallery in 1983. The previous location closed on August 31 and reopens on Doyle St. on September 14.” The late American artist James G. Davis’s “Selections from Five Decades” is scheduled as the opening exhibition; Davis lived several months of the year in Nova Scotia. (website)

The Globe found out who approved that controversial Chagall export from Canada in the winter. Using a Freedom of Information request, Chris Hannay of the Globe located the export permit for Chagall’s La Tour Eiffel, which the National Gallery had hoped to sell at a Christie’s auction this spring. Though that decision to auction has since been overturned, and the Chagall is now back at the NGC, there had been little transparency from the gallery or from the Department of Canadian Heritage as to the process that led to its export. “In the case of the National Gallery’s Chagall, the permit was cleared by Kenneth Brummel, an assistant curator at the Art Gallery of Ontario,” Hannay reports, adding, “The AGO said Mr. Brummel was not permitted to publicly explain his decision.” (Globe and Mail)

The leaders of eight Canadian museums have released a letter pleading their case to the Canadian Heritage Minister. Noting that many donations to Canadian museums have been held up in the wake of a June 12 Federal Court ruling about valuation of cultural property, the museum directors state, “In this critical situation, we request that the federal government expedite the appeals process. Each day counts.” The museum directors also take issue with the ruling’s definition of “national importance” in relation to art objects. The letter is dated August 20, but was released to public this week. Signatories include leaders of the Montreal Museum of Fine Arts, Vancouver Art Gallery, Art Gallery of Ontario, Winnipeg Art Gallery, Musée d’art contemporain de Montréal, Musée national des beaux-arts du Québec, McCord Museum, Kamloops Art Gallery, the Art Gallery of Hamilton and the Musée de la civilisation. (Globe and Mail)

Open Studio in Toronto has three new staff members. They are Rebecca Travis, sales and archive manager; Rachael Dodgson, administrative assistant; and Jess Palmer, technical assistant. Travis holds has a degree in fine art from the University of Newcastle Upon Tyne, Dodgson is a graduate of Queens University’s fine arts program and Humber College’s Arts Administration and Cultural Management program, and Palmer holds a BFA from Mount Allison University. (website)

Canadian artist Luke Murphy will be featured at FIAC in Paris. The French art fair recently released its full lineup, including a project in the Petit Palais by University of Toronto and NSCAD alum Murphy, who is being brought to the fair by New York’s Canada Gallery. (e-flux)

Canadian curator Brendan Cormier has co-organized a notable exhibition at the London Design Biennale. The exhibition “Maps of Defiance” is the UK’s official entry to the biennale, and it focuses on the “collection, documentation and preservation of evidence of the destruction, genocide and enslavement perpetrated by Daesh (Islamic State) against the Yazidi people.” The installation, co-curated with Nathalie Kane, was made by London’s Forensic Architecture in collaboration with the non-profit Yazda. Dezeen has called it one of the top 10 installations at the biennale. (press release, New York Times, Dezeen)

Canada’s official entry to the London Design Biennale is by Bruce Mau Design. Administered by the Canadian High Commission in the UK, the exhibition “The Canadians” aims to “tap into towns whose names are inspired by emotions, from Happy Adventure, Newfoundland to Hope, British Columbia”—a fit with the biennale’s overall theme of “Emotional States.” (press release)