Curators, registrars and others have been without a collective agreement since 2015, and they’ve voted unanimously for a 10-day strike mandate 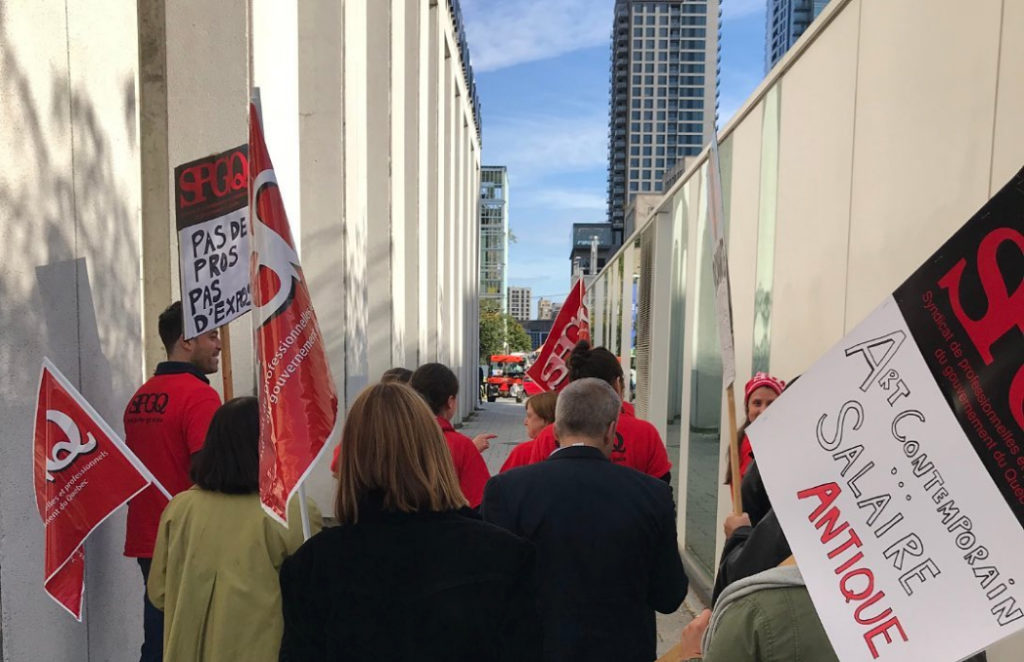 So far, professional staff at MAC Montreal have staged some temporary pickets, such as the one seen here. Photo: Instagram / @prosdumacmontreal, October 8.

So far, professional staff at MAC Montreal have staged some temporary pickets, such as the one seen here. Photo: Instagram / @prosdumacmontreal, October 8.

The curatorial and professional staff of MAC Montreal, some 30 employees in total, may soon be going on strike.

These staff at the Musée d’art contemporain de Montréal (which is a crown corporation of Quebec) issued a statement on October 3 via their union, Syndicat de professionnelles et professionnels du gouvernement du Québec (SPGQ), which announced that they had unanimously voted for a 10-day strike mandate, to be implemented whenever they deem appropriate.

“Among the workers are curators, registrars, document management assistants and conservation assistants,” says the union’s statement. It adds: “Of concern to the union members at MACM are inadequate pay increases, precariousness of employment and lack of job security.”

The union says in particular that half of the workers are currently classified as casual rather than permanent. And all of these workers, it says, are looking at a 5.25 per cent pay increase over five years, when some of the latest Quebec employment indicators have shown salaries in the province rising at a rate of 4.9 per cent per year.

In response to a request for comment on the union’s statement, Yves Théoret, deputy director at the Musée d’art contemporain de Montréal, provided the following comment: “The Musée d’art contemporain de Montréal is optimistic about reaching a negotiated collective agreement with its employees represented by the Syndicat de professionnelles et professionnels du gouvernement du Québec. We are looking forward to the next round of negotiations in the near future.”

“We work in culture. That doesn’t mean that we have to accept just anything for working conditions,” said an October 8 post on the workers’ Instagram feed. “A competitive salary, stable employment, and regular status are, to us, basics that are not negotiable.”

Museum staff have been without a collective agreement since 2015. At that time, the museum was already looking forward to major renovations, plans for which had initially been announced in 2014. As a result, several workers found themselves on rolling temporary contracts without paid leave, vacation or insurance benefits—a situation that was assumed to be short-term, since the museum anticipated an extended closure and eventual staff reorganization within a renovated building.

However, renovation plans, which were officially rolled out in 2018 (two years after provincial and federal governments committed $37.6 million to the project), stalled this year. The museum did close for five months, but after the projected cost of renovations rose (partly due to a booming construction market that has made labour more expensive and scheduling more difficult), the infrastructure overhaul was put on indefinite hold and the museum reopened in June with a full slate of exhibition programming.

Accordingly, the staff have grown impatient about their labour conditions.

“The MAC has very high standards for exhibitions, educational programs and collections,” says the workers’ Instagram feed. “We believe that it must have the same high standards for the wages and working conditions of its employees.”

“As an employer, MACM seems to be ignoring the factors that attract and retain qualified workers,” says the union release. “Yet there is a lot at stake here: namely, the maintenance of a provincial government’s expertise in promoting and promoting culture.”