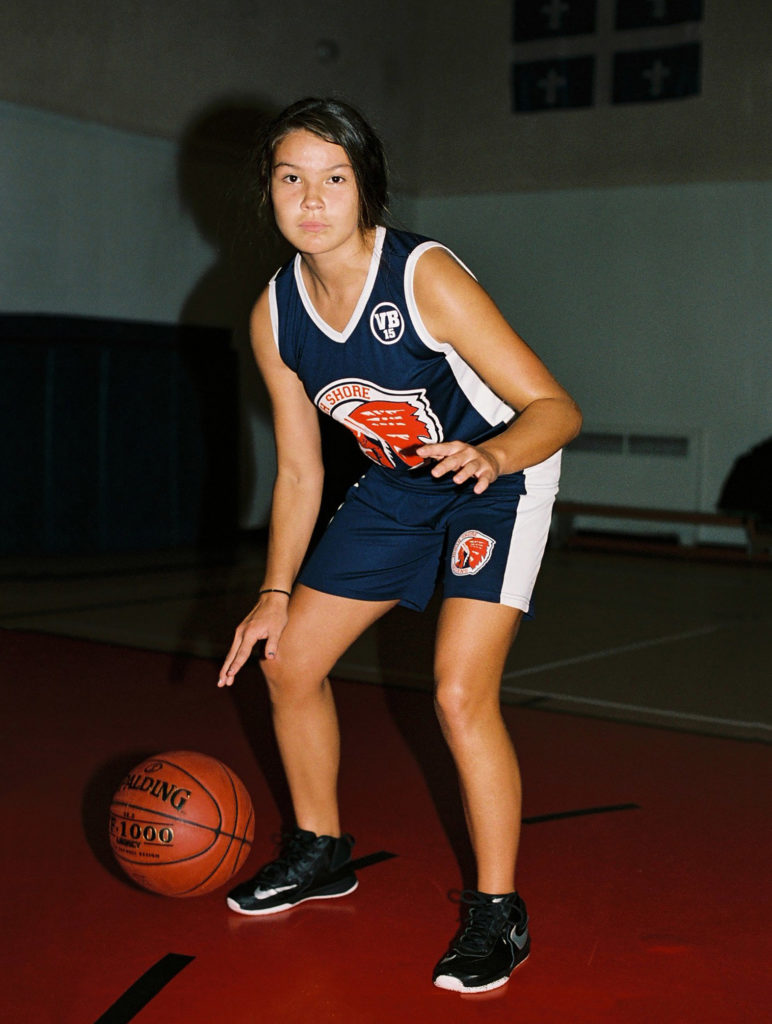 For more than a year, Justine Sobell has been looking for more ways to support the girls basketball teams at Squamish Nation. As sport development coordinator at the nation, Sobell says, “it’s a challenge to get youth to stay in sport,” and she’s always looking for ways to motivate and build momentum for what the young athletes do there.

So after seeing Vancouver photographer Alana Paterson’s photos of a girls hockey team on Instagram—part of Paterson’s ongoing and Flash Forward Award–winning series Title IX—Sobell reached out and asked if Paterson would be interested in doing some shoots at Squamish Nation.

“And…it snowballed,” Sobell says. In a good way. Not only did Paterson show up and do multiple portrait sessions with the girls basketball teams in Squamish—she was also invited to photograph the women’s half of the Junior All Native Basketball Tournament, a competition between 83 teams from 50 nations that was held in Vancouver in 2018.

“The girls love the pictures,” says Sobell. And they will soon be travelling downtown to see them writ large.

In April, some of those portraits of young Squamish Nation basketballers will be printed 10 feet tall and installed in the Chinatown-Stadium SkyTrain Station as part of the Capture Photography Festival’s public art program. The site, made possible in partnership with TransLink, is a crucial one for this particular series of photographs.

“It will be amazing having these huge photos of the girls right next to two sports stadiums,” says Sobell, pointing out that the station is right next to where the BC Lions and Vancouver Canucks play. “There’s also the BC Sports Hall of Fame nearby, which just opened a new Indigenous Sports Gallery,” so people on their way there will also see the Squamish Nation basketballers en route.

Paterson, who also photographs for the New York Times, says it has been a great working with the teams. Paterson also remains passionate about the need to make women’s positions in sport more visible. Her Title IX series, in particular, highlights the strength of teen girl hockey players from Windsor, Boston, Chicago and Vancouver—as well as the fact that they get much less support for their efforts than boys of the same age do.

“When I started researching girls in sport, it floored me,” says Paterson. “The dropout rates [from sport] for teen girls are six times higher than for teen boys. It’s especially concerning given the benefits that come from participation in sports. 90% of high-level female execs played sports as young adults…And encouraging young women to stay in sports encourages better mental health.”

Paterson’s photos are just one highlight of the Capture Photography Festival program released so far.

Another not-to-be-missed presentation at Capture will be Deanna Bowen’s solo exhibition at the Contemporary Art Gallery. Bowen’s work there will explore histories of the Black community in Vancouver, as well as her ongoing project On Trial The Long Doorway. As part of the festival launch event, Bowen will speak at the CAG about her work.

More details for the Capture Festival are due to be released in coming months. The festival, founded in 2013, runs April 3 to 30 in multiple Vancouver galleries and public spaces.