Over 20 Years Later, a Queer Art Project in Winnipeg Reclaims Its Space

In 1997, an agency refused to display Shawna Dempsey and Lorri Millan’s “One Gay City” posters in bus shelters. Now they’re part of the show “One Queer City” 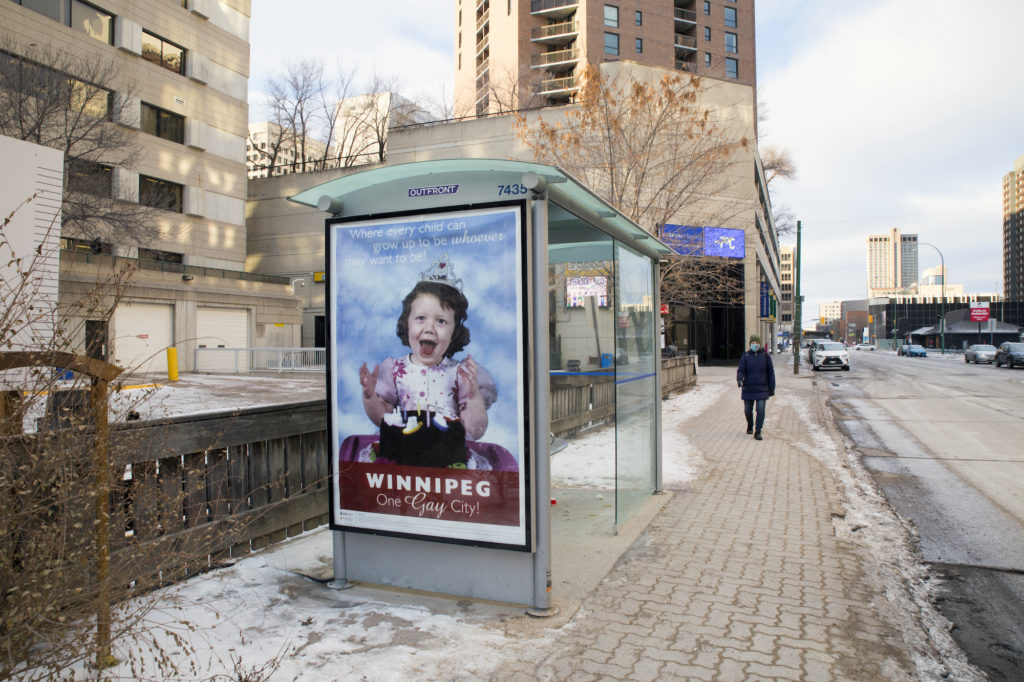 After 23 years, Shawna Dempsey and Lorri Millan’s One Gay City posters are finally being installed as intended.

In 1997, the collaborative duo created three posters with the slogan “Winnipeg: One Gay City!”—a parody of the city’s then-slogan, “One Great City”—to be displayed in three bus shelters in downtown Winnipeg.

Back then, Dempsey spoke to Morley Walker of the Winnipeg Free Press, explaining that the posters depicted Winnipeg as “a homosexual Mecca and paradise.” She noted the irony of this depiction, since “In many ways, Winnipeg is a dystopia for gay people…. Violence committed against gays has resulted in murder.”

Dempsey believed at the time that the posters would encourage conversations around this violence; however, the ad agency involved back then thought the posters were inappropriate and refused them. Dempsey and Millan filed a human rights complaint, but the project was never fully realized—until now. 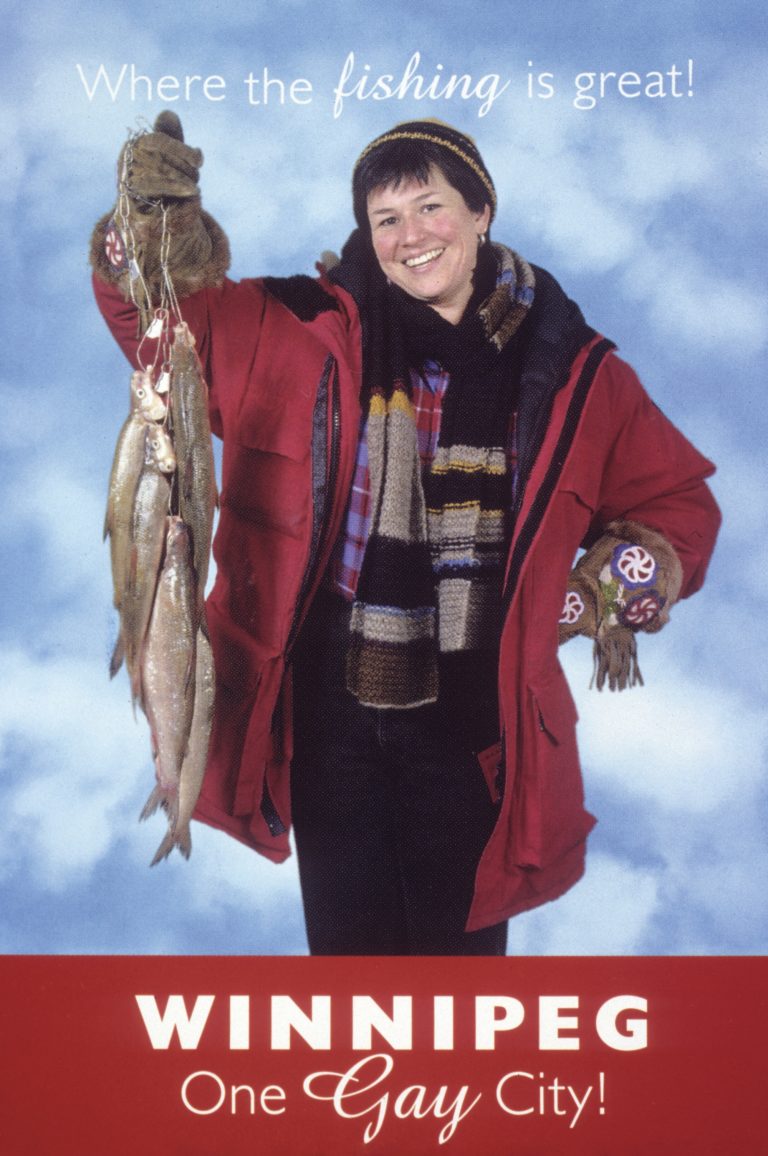 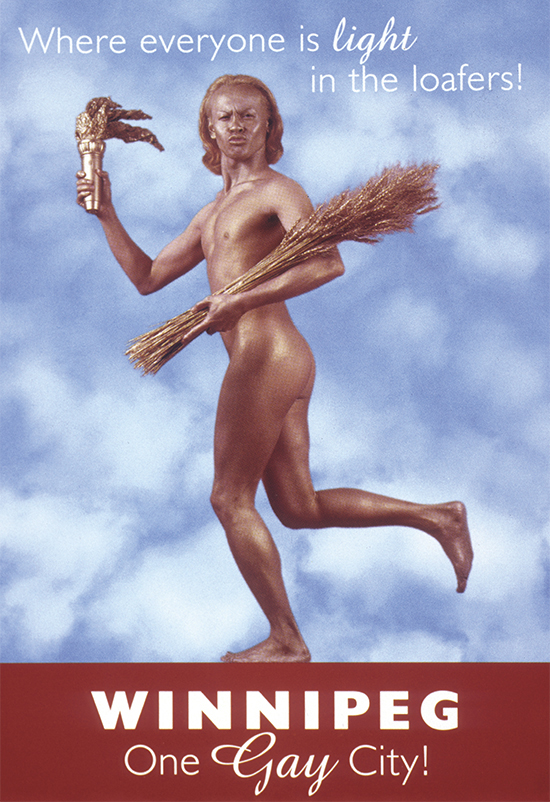 On November 16, these posters finally went on display—along with works by five other artists—as part of the University of Manitoba School of Art Gallery’s public art exhibition “One Queer City,” curated by Blair Fornwald. Running until February 14, “One Queer City” has posters displayed at seven locations throughout downtown, as well as one near the University of Manitoba’s Fort Garry campus.

Along with Dempsey and Millan, the other artists in “One Queer City” are Jean Borbridge, Mahlet Cuff, Dayna Danger, Larry Glawson and Ally Gonzalo. Since there is no one queer experience, Fornwald explained in the exhibition materials that it was important to show work by artists who “represent a range of intersectional identities.”

“Winnipeg wasn’t queer in the nineties, isn’t yet queer, but these [images] may be enough for us to imagine a queer future on the horizon,” Fornwald states, referencing José Esteban Muñoz’s theory that queerness is a destination which remains just out of reach.

This time the posters were installed without any issue or pushback from other agencies involved. Fornwald felt optimistic throughout the installation process and stated in an interview with Canadian Art, “It’s a joyful project and proposes hope for the future.” 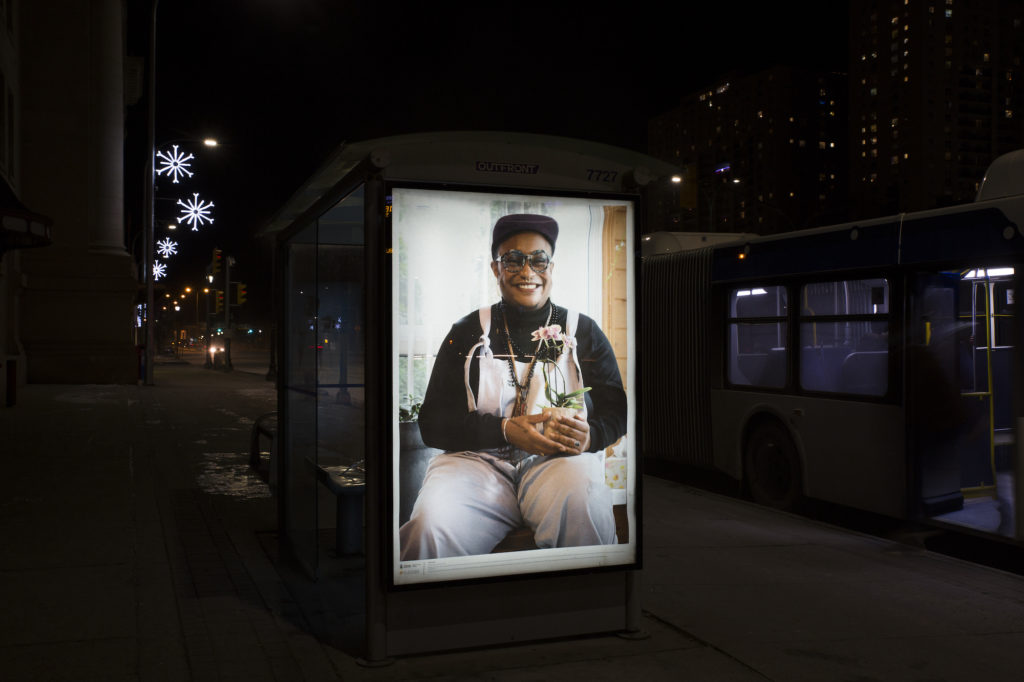 Jean Borbridge, Cladding: the application of one material over the other to provide a skin or layer, 2020. Academy Road at Wellington Crescent. Courtesy of University of Manitoba School of Art Gallery.

The fact that these images are now able to be displayed signifies how attitudes have changed toward the queer community over the past two decades. Dempsey and Millan’s original posters were created in part as a reaction to former Mayor Susan Thompson’s refusal to sanction Gay Pride Day in the 1990s. Leading up to and during Thompson’s mayoralty, homosexuality was viewed by many as a danger to society and was largely invisible in Winnipeg. The posters displayed in bus shelters would have put life-sized images of queer individuals at eye-level for all passers-by to see.

“If I had seen the One Gay City posters while growing up in Winnipeg, I would have been like, ‘Oh, I’m gay!’ and felt a sense of affirmation,” Dayna Danger stated during a November 19 exhibition panel.

At the same panel, Dempsey and Millan affirmed that “it feels great to finally have these works on public display.” They never believed it would be possible, in part due to the Jarvis Avenue studio fire in 2019, which caused them to lose all their work. With the help of technicians at the University of Manitoba’s School of Art, these posters were recreated to their intended scale. Fornwald says that “it is immensely gratifying to revitalize these works.”

“One Queer City” is thus an exhibition that celebrates how far queer rights and representation have come in the past two decades, as well as acknowledges how far the queer community still has to go. In an interview with Canadian Art, Millan concluded, “It’s bittersweet—because it’s sad that this activism is still necessary for the queer community.” 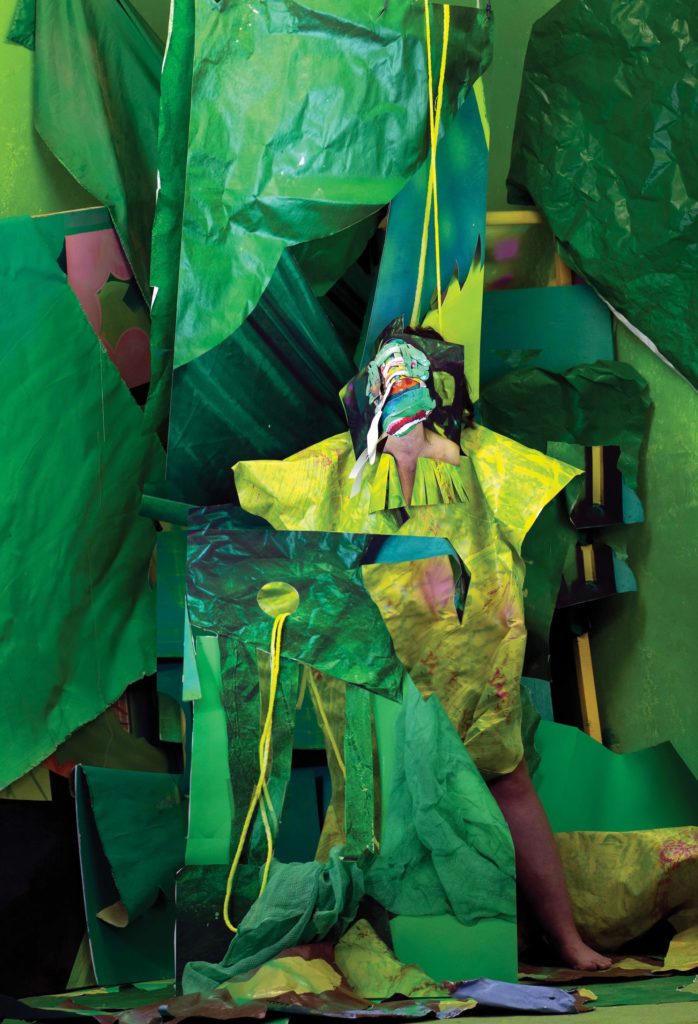 Jean Borbridge, Cladding: the application of one material over the other to provide a skin or layer, 2020. Commission for transit shelter by School of Art Gallery, University of Manitoba. Courtesy of the artist.

Dayna Danger, Sisters, 2015/2020. Commission for transit shelter by School of Art Gallery, University of Manitoba. Courtesy of the artist.

Mahlet Cuff, At home, 2020. Commission for transit shelter by School of Art Gallery, University of Manitoba. Courtesy of the artist.

Lindsay Inglis is a writer and researcher from Winnipeg. She recently completed her MA at the University of St. Andrews, where she was a writer for HASTA magazine.

Since 1989, Winnipeg duo’s breakthrough feminist art includes We're Talking Vulva, Lesbian National Parks and Services, and A Day in the Life of a Bull-Dyke 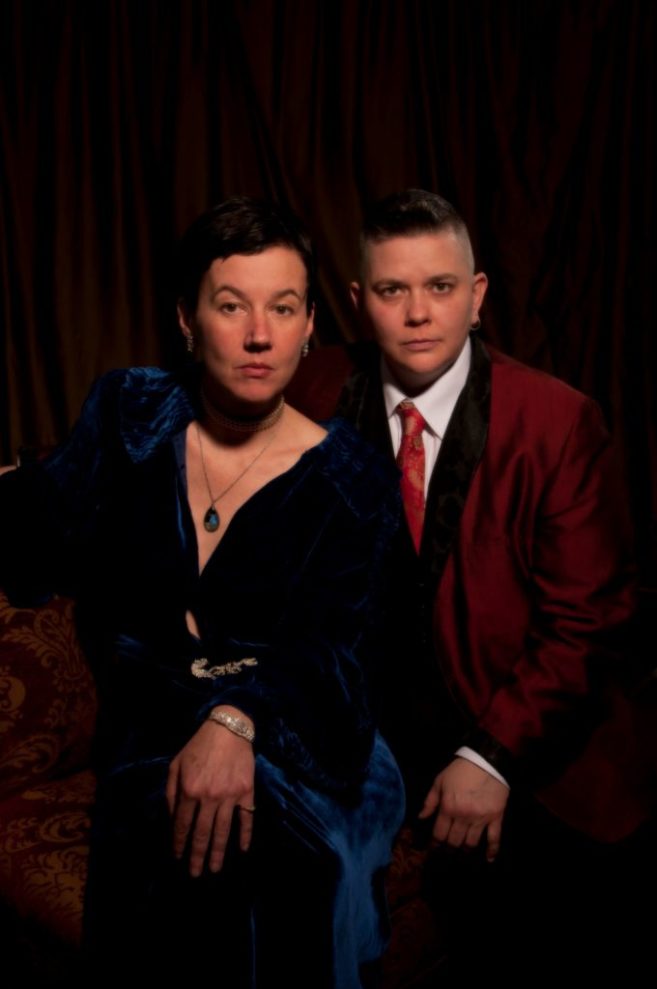