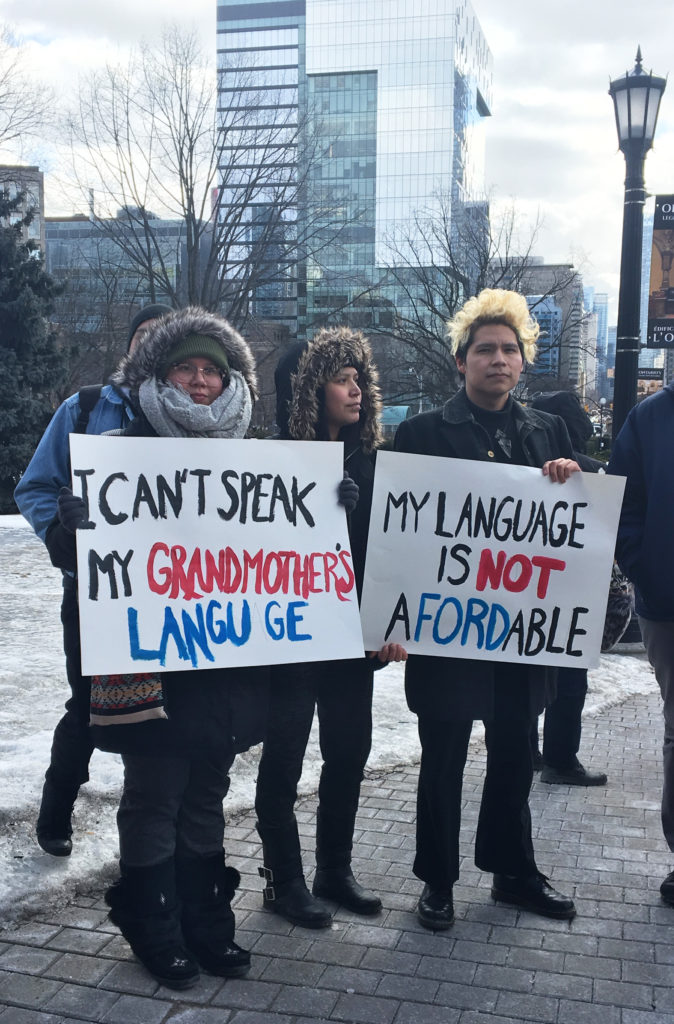 People at a rally to support reinstatement of the Indigenous Culture Fund at Queen's Park in Toronto on February 25, 2019.

People at a rally to support reinstatement of the Indigenous Culture Fund at Queen's Park in Toronto on February 25, 2019.

“My Kookum’s Language Was Taken. I Want it Back!” “Uphold UNDRIP Article 13.” “We Need the 2018 Indigenous Curriculum.”

These were just some of the signs waved outside the Ontario Legislature this week during a rally against cuts to the Indigenous Culture Fund.

The fund, created by a previous Liberal provincial government in 2017 in response to the recommendations of the Truth and Reconciliation Commission (TRC), had a wide scope. Its range went beyond Eurocentric concepts of arts and culture, instead nurturing support for language learning, traditional harvesting, youth-elder connecting and more.

“I have spent about 25 years in Canada’s cultural sector, and when I saw the launch of the Indigenous Culture Fund, to me this was one of the most exciting things that I’d seen in all those 25 years,” said Jesse Wente, director of the Indigenous Screen Office, at the rally this week. “The opportunity for cultures to be reborn, to be restored and revitalized within their own communities, driven by their own communities—this is exactly what the TRC called for in its 94 recommendations and calls to action. This was exactly the sort of action colonial governments should do in response to the TRC.”

In December 2018, though, it came to light that the current Conservative provincial government had slashed the fund nearly in half, from $5 million to $2.75 million, and put it under review.

“This fund has only been around one year, not long enough to assess the effectiveness, to understand what could come out of a fund like this,” Wente pointed out.

“For a long time, I would hide the fact that I was Indigenous,” said Andrea Goulais. “Being able to embrace my culture has made me proud of my life.”

A Fund that Changed Lives

“In its short existence, the Indigenous Culture Fund was changing lives,” says an open letter to Premier Doug Ford that’s been signed by more than 1,700 people. At the rally, the letter was read out loud by Aylan Couchie. “Language learning and cultural reclamation are powerful steps towards empowerment and healing.”

The letter notes the fact that Premier Ford’s cuts to the Indigenous Culture Fund have taken effect just as the United Nations named 2019 the International Year of Indigenous Languages. It also notes that Ford’s views contradict those of fellow Conservative, and former Prime Minister, Stephen Harper. In 2008, during his prime ministership, Harper asserted that the burden of recovering from Indian Residential Schools—language loss included—should be shared by all Canadians, not just by Indigenous people.

“Over a million Indigenous Canadians today can not speak their languages because their parents or grandparents were prevented by force from speaking theirs,” says the open letter to Premier Ford. “Within each language are embedded our worldviews, our histories, our laws. They are who we are.”

“I’m not here today as an artist and writer. I’m here as a mother, grandmother, and member of the Indigenous community,” said Aylan Couchie.

It’s Not About the Arts

“That’s the kind of move that sets reconciliation back,” Monkman recently said in the Montreal Gazette regarding the Indigenous Culture Fund cuts. “It represents a lost opportunity for us to reclaim our culture and languages.”

Though many artists have objected to the cuts, it is crucial to understand that the Indigenous Culture Fund is not just a fund for art. And it’s not just artists who are concerned—far from it.

“I’m not here today as an artist and writer. I’m here as a mother, grandmother, and member of the Indigenous community,” said Aylan Couchie at the Ontario Legislature rally this week. Couchie explained that she is the granddaughter of a residential-school survivor who lost their language—and now she is going to weekly classes to restore that connection.

Couchie said the responses she has received from the provincial government urge her to look to its tourism-based and cultural attraction-based funding as an alternative for funds lost in the Indigenous Culture Fund cuts. But this is not a suitable substitute, she points out.

“Our culture should be worth more to Ontario than just a tourist commodity,” Couchie said, quoting the open letter. She added as she read, “We are concerned the Ontario PC government does not realize what it is they have cut and, we fear, are looking to completely dismantle.”

Youth and Elders Speak Out

Grade 12 student Andrea Goulais, who wants to one day become an architect and create sustainable housing for Indigenous communities, was another speaker at the rally.

“For a long time, I would hide the fact that I was Indigenous,” Goulais said, explaining that this then led to anxiety and self-doubt. But now, after learning to participate in making mossbags, quillwork and fancy shawl dancing, as well as learning some of her ancestors’ language, Goulais says, “being able to embrace my culture has made me proud of my life and changed my life.”

Also at the Ontario Legislature rally this week, singer Sadie Buck, creator of Bones: An Aboriginal Dance Opera, spoke. She recalled how she learned singing, dancing and food preparation as a child daily in her family home: “It’s just how we lived in our house, and that’s culture,” Buck said. “No one told us that singing is art. No one told us that dancing was art. We just did it.” She added, though, that that is not the norm today. “Nowadays we have a really difficult time as Indigenous people [and] we have to find other ways to transmit culture.”

Fund supporters at the Ontario Legislature also noted that under the UN Declaration for the Rights of Indigenous People, Indigenous people not only “have the right to revitalize, use, develop and transmit to future generations their histories, languages, oral traditions, philosophies, writing systems and literatures,” but also shall be provided “redress through effective mechanisms.”

A clarification and correction was made to this post on February 27, 2019. The original copy indicated that the open letter was signed by 1,300-plus people, not 1,700-plus people. Clarifications emphasized the language learning aspect of the fund.