News in Brief: A Look at the New Viola Desmond Bill and More

Plus: a public art project inspired by Desmond, the arrival of two new bank branches just for artists, and some big Canadian sales at Christie’s in London. 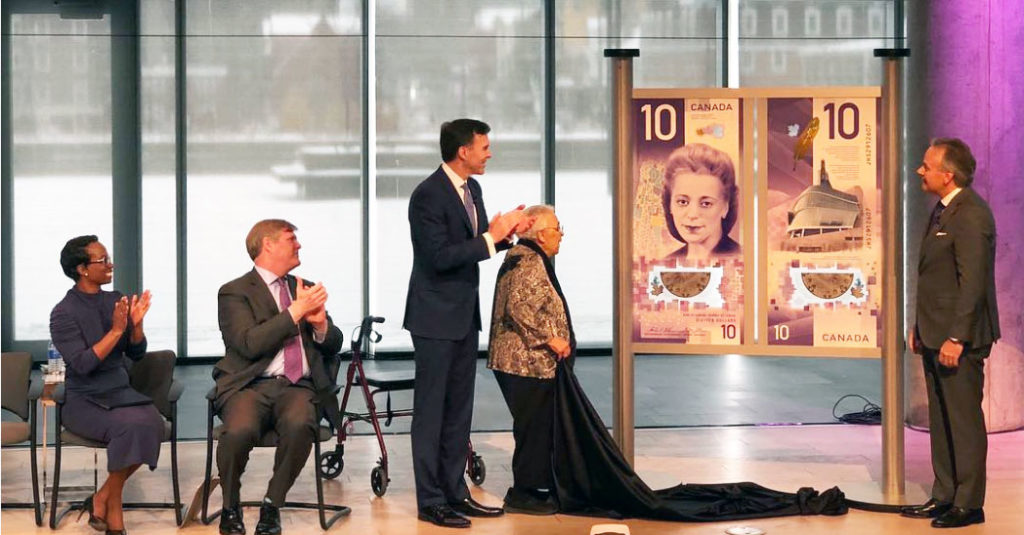 The design of Canada’s new $10 banknote, featuring a portrait of human rights defender Viola Desmond, has been unveiled. The design was released this morning by the Bank of Canada at the Halifax Central Library, in Desmond’s home region of Nova Scotia, with a simultaneous event at the Canadian Museum for Human Rights in Manitoba. The bill is also the first to have a vertical layout. The CMHR (featured on the reverse side of the new bill) is also currently hosting an exhibition about Desmond, a Black Nova Scotian businesswoman who challenged racial segregation at a film theatre in New Glasgow in 1946 and helped start the modern civil rights movement in Canada. (press release)

Also: the building where Viola Desmond stood up to racism is to feature art inspired by her. As the CBC reports, “The law firm that bought the historic Roseland Theatre building in New Glasgow, N.S., is asking artists from across Atlantic Canada to submit work inspired by Desmond, who refused to give up her seat in the whites-only section back in 1946.” The art would appear on a 12-metre-high brick wall on the side of the building. Applications from artists are due by May 31. (CBC Nova Scotia)

Ten new public art projects are coming to Vancouver. This spring, as part of a project called “Ten Different Things,” locals Colleen Brown, Instant Coffee, Laiwan, Khan Lee, Holly Schmidt, Henry Tsang, Janet Wang, Casey Wei, Jen Weih and Denise Holland and Pongsakorn Yananissorn will explore conditions of how culture is experienced in Vancouver. Sites through May 2018 include City Hall, Robson Square, Chinatown, the Hardy Island Quarry, Kingsgate Mall and Third Beach. Among the projects are: tracing the movement of granite from the Hardy Island Quarry to the kitchen counters of luxury condominiums; an artist residency in a barnacle-covered school bus that investigates community  displacement in Chinatown; and meals to explore the history of the Vancouver anti-Asian riots in 1907. (press release)

Vancouver’s Trans Am Totem needs new home before it ends up in artist’s driveway. According to the CBC, “one of Vancouver’s most memorable pieces of public art will be coming down in September 2018, and so far, it doesn’t have anywhere to go. The highly Instagrammed installation of five cars stacked on top of an old-growth cedar tree, known as the Trans Am Totem, was created by artist Marcus Bowcott and his wife Helene Aspinall, specifically for its current location near the Georgia Viaduct, but because it is part of a Vancouver Biennale public art exhibition, it was only scheduled for a two-year run. That timeline was extended by the city for another two years, but a representative says when that comes to an end in September, the city will be looking to remove it.” (CBC Vancouver)

New bank branches specifically for artists and culture workers have opened in Edmonton and Calgary. “In both Edmonton and Calgary, ATB Financial [a provincial crown corporation] has established a branch for arts and culture. Each has advisers specifically trained to navigate artists’ sometimes fluctuating livelihoods and help them secure financing,” the CBC reports. “Musicians, artists tend to hustle a little so if you lose something over here, you’re going to pick something up over here,” initiative director Ben Spencer told the CBC’s Calgary Eyeopener. “So we think it’s a decent bet.” The Calgary branch also hosts a gallery and cafe. (CBC Calgary)

There was some interesting Canadian market activity at the Christie’s sale in London this week. A new record was set for a work on paper by Agnes Martin when her 1961 grid with pyramidal forms, Words, sold for $1.1 million USD. Some Canadian works were sold to fund Sobey activities, too. As Artnet reports: “Two paintings by the acclaimed British artist Peter Doig came from Canadian philanthropist Donald Sobey, who was raising funds to promote young Canadian artists abroad. Sobey had bought the more valuable, Charley’s Space (1991), for a double estimate £850,000 at a fund-raiser for the Whitechapel Art Gallery in 2006, and this time it beat its estimates again, selling to a phone bidder for £10.1 million ($15.1 million).” (Artnet)

Canadian art schools saw the work of many alumni recognized at the Oscars. Carleton University architecture grad Paul D. Austerberry won an Oscar for production design on the Shape of Water. Seneca’s School of Creative Arts and Animation had six alumni who contributed to Academy Award-winning films Coco and The Shape of Water. Seneca 3D Animation graduate Brendan Beesley worked on the animation for Coco, and Visual Effects for Film and Television alumni Aditi Doshi, Mark Hammond, Ankit Kenia, Angel Li and Matt McEwan worked on visual effects for Shape of Water. Among others, OCAD alum Taku Dazai was also part of the production design team on Shape of Water as prop designer and prop maker. (Carleton University; press release; IMDB)

Lauren Fournier has been awarded the 6th annual Middlebrook Prize for Young Canadian Curators. Selected by a jury of arts leaders, her proposed exhibition will be presented at the Art Gallery of Guelph from September to December 2018. Created in 2012, the annual prize is given to a Canadian curator under 30. Fournier’s proposed exhibition, “epistemologies of the moon,” engages the symbolism and imagery of the moon as a historically feminine and, more recently, feminist symbol, opening it up to new meanings and valences in the 21st century. (press release)

Janique Vigier has been selected for the 2018 Hnatyshyn Foundation-Fogo Island Arts Young Curator Residency. Originally from Winnipeg, Vigier is a curator and writer based in upstate New York, where she is completing a masters in curatorial studies at Bard College. She is assistant editor at Semiotext(e), Los Angeles. The Young Curator Residency program, valued at $15,000 annually, sends an exceptional young Canadian curator between the ages of 25 and 30 to work in residence at Fogo Island Arts for a six-week residency in the spring of 2018. (press release)

The Bonavista Biennale has announced its curators for summer 2019. Director and curator Catherine Beaudette will be joined by guest curators David Diviney, curator of modern and contemporary art of the Art Gallery of Nova Scotia, and Matthew Hills, director of the Grenfell Art Gallery. Curators will be selecting a broad representation of contemporary visual artists from across the country, with particular focus on the North Atlantic seaboard. Building on the format of the inaugural 2017 event, Bonavista Biennale 2019 will be a large-scale, multi-site exhibition in a variety of non-traditional gallery spaces spread throughout communities and the landscape. (press release)

Abedar Kamgari is now interim programming coordinator at Hamilton Artists Inc. Kamgari fills in for Caitlin Sutherland, who is heading to the Blackwood Gallery. Kamgari is an artist, independent curator and arts worker based in Hamilton and Toronto. She received a BFA from McMaster University in 2016 and her work is currently on view at the Art Gallery of Hamilton in an exhibition titled “The Journey West.” (Hamilton Artists Inc.)

Halifax artist and NSCAD instructor Susan Wood has died. According to Studio 21, Wood was born in Saint John and grew up in Amherst. She attended Mount Allison University (BFA 1976), participated in the Banff Winter Studio Program (1976–1977) and received an MFA from The University of Calgary in 1981. Wood lived in St. John’s from 1983 to 1989, where she was a founding member of the Eastern Edge Gallery, taught at Memorial University Extension Arts and continued her studio practice. She moved to Halifax in 1989 and began teaching at NSCAD University in 1990. Wood, who was 64, is survived by her children David, Jamie and Aiden, and she was predeceased by her husband Stephen Fudge. (Studio 21)

Jewel Foster, one of the founding members and administrators of Hamilton Artists Inc., has died. Foster was a supporter and patron of the arts in Hamilton, and she also founded Zone Cinema in 1981, which nurtured and developed a community of filmmakers in the region. Her contributions include developing a members exhibition platform at the Inc. and developing and strengthening its funding. She leaves behind husband Ted Haines and children Thea and Gabriel. (Hamilton Artists Inc.)

Influential artist James Luna is being remembered across Turtle Island and beyond. Luna’s Artifact Piece—where he turned his Indigenous body into a museum exhibit—was a 1980s breakthrough. But the power of his work doesn’t end there. The remarkable Payómkawichum, Ipai and Mexican artist offered much to many other artists and viewers. (Canadian Art)

Patron and arts supporter Jacqueline Desmarais passed away on March 3 at the age of 89. In a release, the Montreal Museum of Fine Arts notes that Desmarais contributed to the acquisition of the glass sculpture by Dale Chihuly entitled The Sun (2003) and alongside her husband, business leader Paul G. Desmarais (1927–2013), the founder of Power Corporation, and her family, she promoted the implementation the Jean-Noël Desmarais Pavilion, which was built in 1991 thanks to a major donation from the philanthropic couple and Power Corporation. Together with her husband, she also chaired in 2013 the first event of the fund-raising organized by the MMFA Foundation in Florida. (Montreal Museum of Fine Arts)

This post was updated in March 8, 2018, with information about the situation of the public sculpture known as the Trans Am Totem in Vancouver.

Among the 20 artists participating are Meagan Musseau, Jordan Bennett and Mark Igloliorte 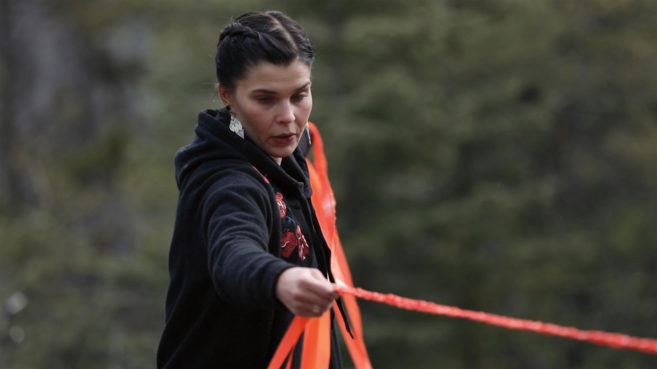