Thirty TransLink buses will be wrapped with art for the year-long project. The buses will also host artist talks and art-making activities for families 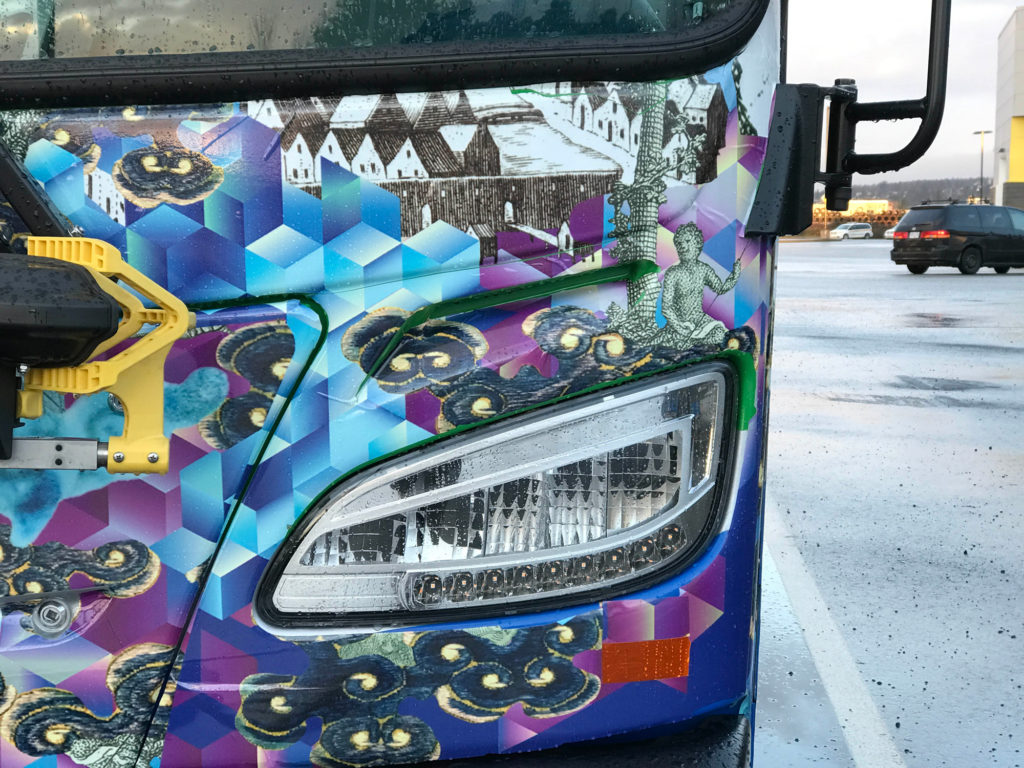 Diyan Achjadi 's artwork NonSerie (In Commute) (2017/2018) was the first to be wrapped on a TransLink bus for the project How far do you travel?. Image courtesy the artist.

Collage, embroidery and calligraphy. Language learning, psychology textbooks and hazard tape. These are just some of the media evoked in a series of artworks that will wrap 30 Vancouver buses this year.

“We are always thinking about ways to bring art outside of the gallery,” says Kimberley Phillips, curator of the Contemporary Art Gallery, of the year-long project. “This seemed like a great exercise to design something for the broadest possible publics we might encounter in Vancouver.”

In total, five artists have created artworks that will cover the TransLink buses. Diyan Achjadi, whose artwork is already on the road, has reconfigured historical illustrations of Indonesia. The colours in Anishinaabe artist Rolande Souliere’s design symbolize the four directions of the earth, while the shapes conjure hazard tape. Erdem Taşdelen’s motif draws upon graphs from a Vancouver Public Library psychology textbook. Patrick Cruz’s pictographic imagery “partially derives from a pre-colonial Philippine language which was suppressed by the Spanish during the centuries of their occupation,” says a release. And Anna Torma’s blown-up embroidery and textile piece addresses Hungarian folklore and her children’s drawings.

“I was thinking about the word commute, and its etymological origins are to transform or to change,” says Phillips. “And I was also thinking of a number of different artists who are attentive to the ways that visual languages transform across time and space.”

The project is appropriately called “How far do you travel?” TransLink already has other public art projects in place at its Skytrain stations, but this is the first major project in some time on its buses. By March 2019, all 30 buses should be on the streets of Vancouver. Inside each bus will be artist quotes and texts related to their project. There will be artist talks, special events and artmaking sessions on the buses as well.

“I think Patrick Cruz will do a freestyle DJ session on the bus,” says Phillips. “And for the first program, Diyan Achjadi and I will be in conversation aboard a moving bus.”

Some of the artists involved in “How far do you travel?” are quite experienced in public art. For instance, Rolande Souliere has permanent public artworks installed in Winnipeg and Toronto, and will be doing some more temporary ones at the CAG in 2019. But other artists, like Anna Torma, usually work at smaller scales, exhibiting only indoors.

“I was thinking about people encountering these images who have possibly no contact with contemporary art, and how we might facilitate entry points into a range of practices,” says Phillips. “But I tried to keep it anchored in artists whose own practices are very much concerned about the commuting of imagery across distances.”