At the Toronto Comic Arts Festival this week, five mothers and artists talked about opening up the graphic-novel field to tales of perinatal illness, traumatic birth and caregiver reflection 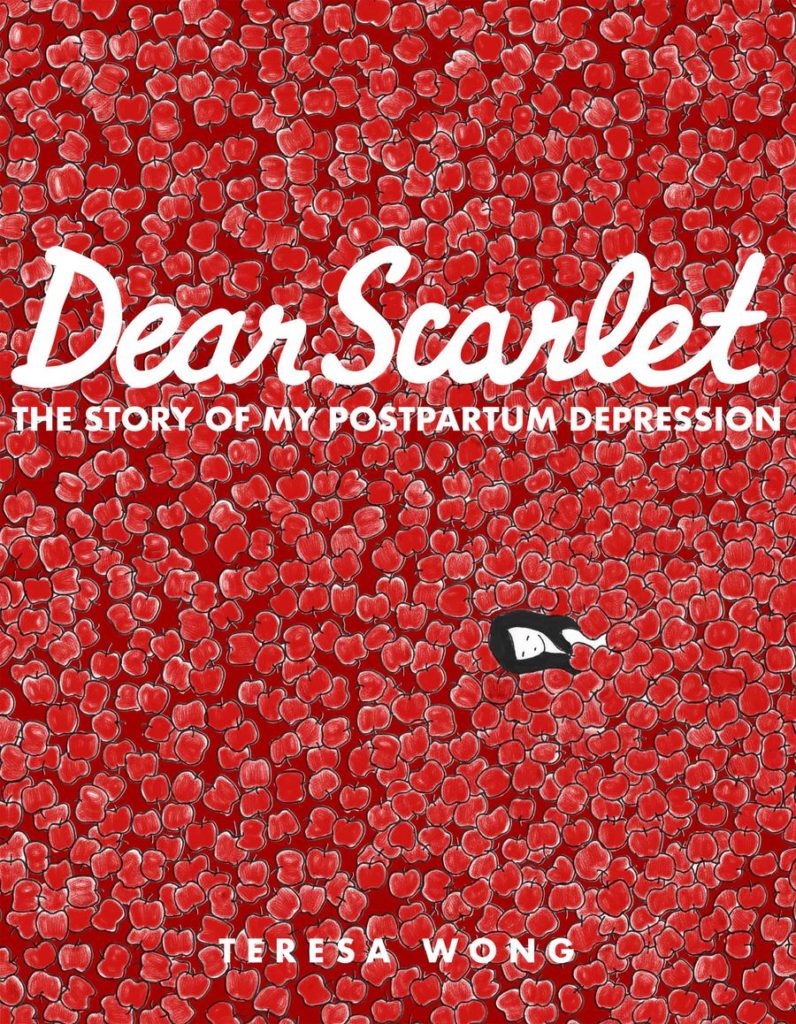 Can a comics artist visibly be a mother, too? What deterrents exist to talking about parenthood in graphic-novel form? How can artists help rewrite mainstream narratives around pregnancy and caregiving?

These were some of the questions that came up in the course of conversation at “The Motherhood Challenge”—a panel at the Toronto Comic Arts Festival on May 11.

The panel featured four artists and mothers—Megan Kearney, Lucy Knisley, Sylvia Nickerson and Teresa Wong. It was moderated by Wendy Browne, herself mom to a school-aged child and part of the team at Women Write About Comics.

Megan Kearney, Toronto-based cartoonist and mom to a toddler, said her experience with comics initially left her feeling that “the only place you see moms is as background to more energetic protagonists.”

“I was very anxious about writing about motherhood,” said Kearney on the panel. “I thought ‘I can’t talk about this online. It’ll be a career-sinker.’”

“I just became insanely ambitious,” says Kearney of the impact of having a child on her work. “I wanted to give that big middle finger to the comics world—‘Look, I can have a kid and write more comics than you!’” In other words, she says, “my form of coping was to work too much—I overcompensated.” 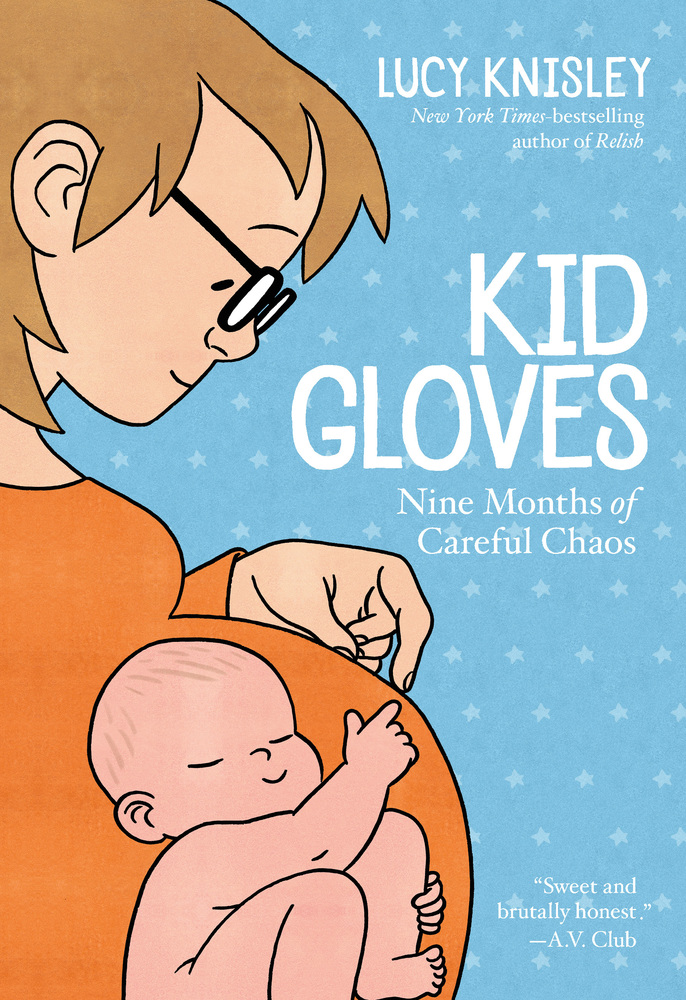 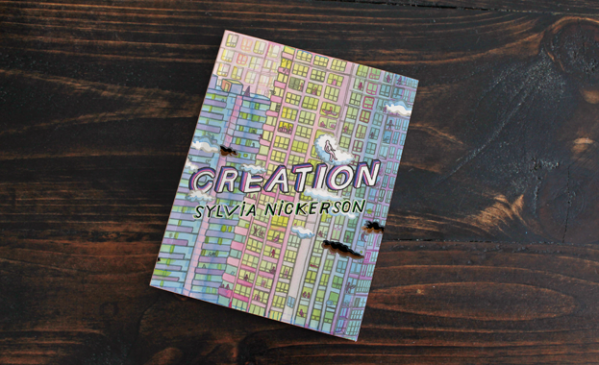 Creation by Sylvia Nickerson, out this fall from Drawn and Quarterly, addresses both parenthood and gentrification.

Kearney wasn’t the only artist on the panel who felt a general chill toward writing about motherhood.

Chicago-based artist Lucy Knisley, also mom to a toddler, had written five critically acclaimed graphic memoirs before her latest New York Times-bestseller Kid Gloves, which takes on perinatal illness, miscarriage and traumatic birth. It was published by MacMillan in February.

“I think there was a lot of stigma about writing comics about motherhood—that it was ‘too niche,’” said Lucy Knisley. “But we have all reproduced or been reproduced.”

Knisley felt even more compelled to proceed with Kid Gloves after experiencing the way other books on pregnancy and motherhood had failed to reflect her experience.

“I planned this project expecting that I would write a book about getting pregnant,” said Knisley. “But then I had a really rough pregnancy and almost died in childbirth. So it became a book about what is wrong with reproductive health care in the United States.”

Knisley says most of the books she read about pregnancy were written by people who had never been pregnant or who regarded it as a state of fertile peaceableness.

“In reality, I felt terrible for 9 months and then almost died,” says Knisley. “And I was like, ‘Where is this story? If this is so common, why is it not written about?’”

Sylvia Nickerson is a Hamilton-based artist and mom to two kids, a nine-year-old and a five-year-old. Her book Creation, out this fall from Drawn and Quarterly, looks at the role of families and artists in gentrification. She is also the force behind the 2018 release All We Have Left Is This, “a collection of 14 short stories about daughterhood, marriage, motherhood, desire, religion, assault, loneliness and aging.”

Nickerson said she too struggled with the lack of caregiving protagonists in comics, and elsewhere.

“Do you still get to be the hero of anything once you come into a caregiving role?” Nickerson asked. “Often you become invisible because of that.” 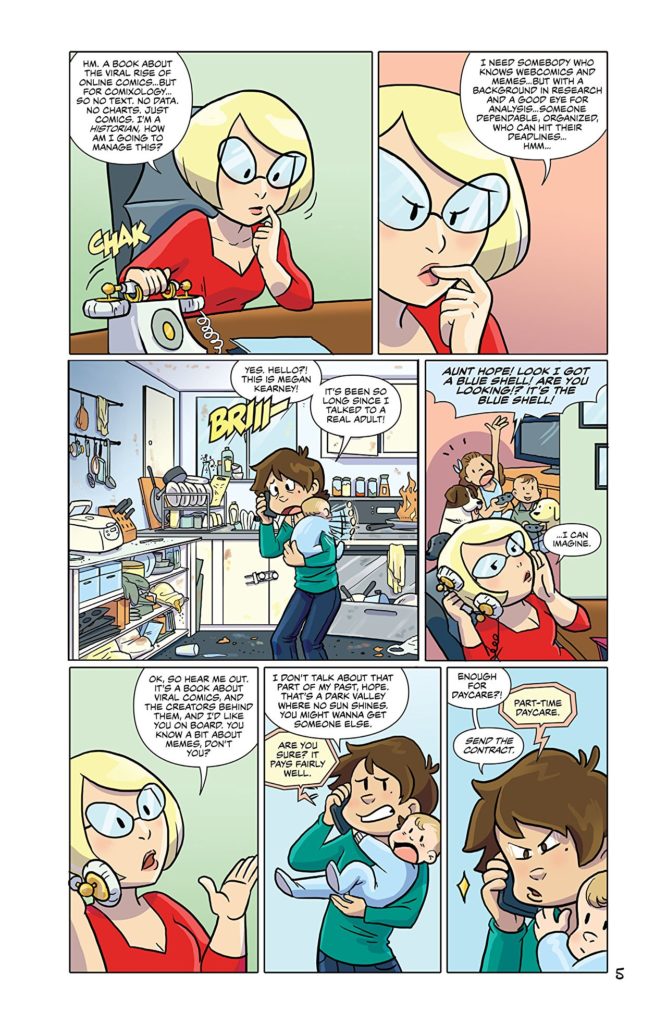 A page from Hit Reblog by Megan Kearney shows her holding her newborn while discussing the book on the phone with her editor. Image: Comixology.

Nickerson notes New Yorker cartoonist Roz Chast’s 2014 memoir Can’t We Talk About Something More Pleasant?, about taking care of aging parents, was one of the few graphic novels she had seen that addressed this problem.

On the plus side, though, for Nickerson, “the part of parenting that deconstructs your ego made it easier for me to write afterwards.”

Nickerson says that once she got back to writing, she felt compelled to articulate the anger, resentment and confusion that were part of her parenting experience.

“When you have an experience of birth it makes you think about death,” says Nickerson. “Losing an old identity, and forming a new one.”

Making art can also be a way to rewrite maternal narratives.

“They tried to raise me as a feminist—meaning [only as] a woman succeeding in a male world,” Nickerson says of her parents and grandparents. “After I had kids, it was time to revise and rewrite that.”

Teresa Wong is the Calgary-based author of Dear Scarlet: The Story of My Postpartum Depression, just out from Arsenal Pulp Press. She is also mom to three kids, aged nine, eight and five.

Wong’s book, her first, has been featured recently in Buzzfeed, Bustle and CBC’s The Current. Women have reached out telling her the book has helped them, which is a surprise, she says.

“I wrote the book for myself and my daughter, but the fact that women are seeking help with it is great,” says Wong.

Dear Scarlet documents Wong’s experience of PPD diagnosis and treatment, as well as a difficult pregnancy and birth. She’s glad to know it might help other sufferers feel less alone.

“The loneliness can be very poisonous,” Wong says of early motherhood. Difficult too, at times, is the fact that her writing time is restricted to 8:30 p.m. to 11 p.m. nightly.

On the less expected, and more positive, side for Wong was the way the parenting process opened certain things up for her.

“I wanted to be a writer for a long time, and I thought the minute I had kids, I wouldn’t,” says Wong. “But somehow becoming a mother has turned me into an author.”