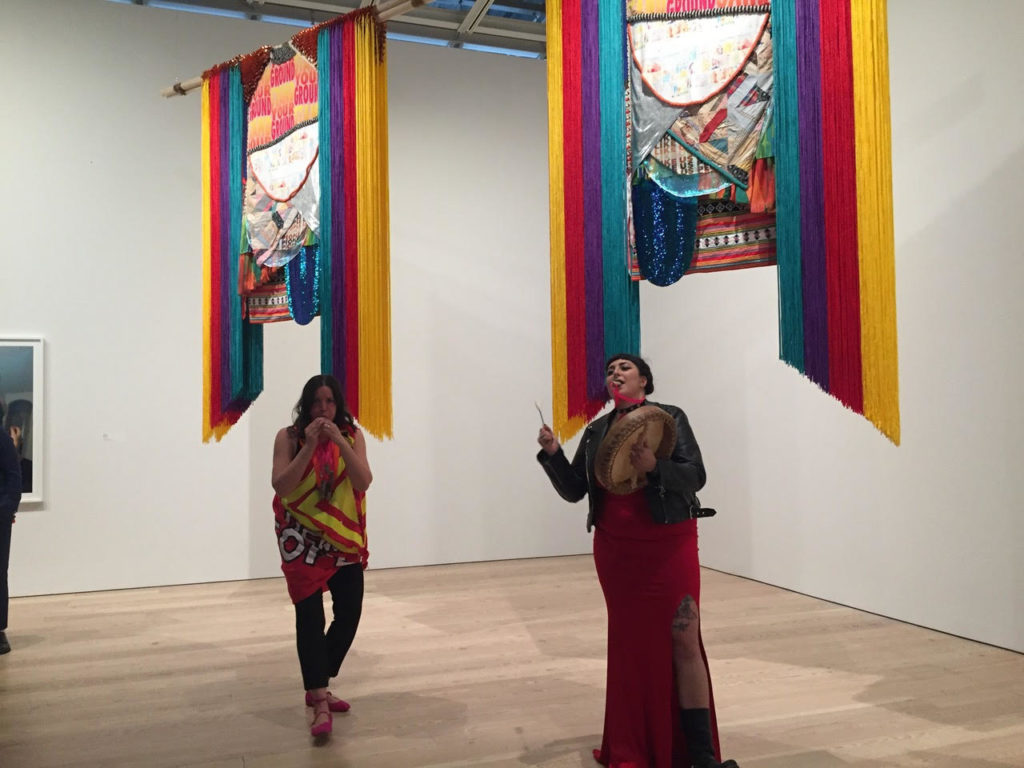 Anishinaabe artist Maria Hupfield is used to having an audience. “I’m a performance artist and I get in front of people all the time,” the Ontario-born, New York–based artist says. And she has exhibited at prominent venues including Site Santa Fe, the Smithsonian and the Museum of Arts and Design as well.

But before an action last week at the Whitney Museum in New York, Hupfield admits that even she was a bit anxious: “A few days before, I started feeling a little nervous.”

On the evening of May 15, Hupfield participated in a public action at a ticketed reception for one of the biggest events in the art world: the Whitney Biennial. But the action was an uninvited one.

During the action, Hupfield, as a member of the Indigenous Womxn’s Collective, along with fellow member Regan de Loggans, unfurled a banner reading “Demilitarize art, people over profit.”

Hupfield and de Loggans also played a drum and other instruments, and read a statement from the collective calling for the removal of Whitney Museum board member Warren Kanders.

Hupfield says that she and de Loggans chose the ticketed reception as a venue for the action because it was a chance to put the protest concerns in front of a privileged audience. She also says she knew a group of artists and curators from Montreal would be there to support them, if needed.

“I think there are times when your body can really count,” Hupfield says. “As two people, we wanted to have a certain amount of impact.… Once we were there I thought, this is definitely something I feel strong in doing. In performing that action with Regan, I think together we were bigger than ourselves.”

The Indigenous Womxn’s Collective held the action in solidarity with a multi-week series of protests by Decolonize This Place. Those protests also called for the removal of Kanders from the board because of his company Safariland’s production of tear gas used at Standing Rock and the US-Mexico border.

“We, as indigenous womxn and femme nonbinary people, are making a stand against the continued violent oppression of brown bodies and communities,” the collective read aloud at the Whitney reception last week. “By not removing Warren Kanders from his position on the museum board, the Whitney is in allyship with white supremacy and genocidal settler colonialism.”

The statement continued: “We are in opposition, as Native artists, curators and community members, to the continued ‘profit over people’ mentality. Indigenous people and other people of color are violently under attack by Warren Kanders’ manufactured weapons of terrorism. You, the Whitney, is harbouring a terrorist who profits from violence against brown bodies. You want our art, but not our people.”

“Once we were there I thought, this is definitely something I feel strong in doing. In performing that action with Regan, I think together we were bigger than ourselves,” says Hupfield.

Shortly after reading of the statement, the action ended and Hupfield and de Loggans left the gallery. Hupfield says they were followed by four security guards.

“I don’t want to be instrumentalized as an artist—and I’m so aware politically of how often that can be the case,” Hupfield says on reflection. “I think it was just really rough to see a lot of Native artists being included in the biennial while at the same time there’s a board member who is basically targeting our communities.”

Hupfield says that the fact indigeneity is not often in the foreground in New York’s art institutions affected her decision to do the action. “In New York, people don’t identify that there are indigenous people living here, and so that’s part of the thing about the Indigenous Womxn’s Collective—there are over 30 of us, and we are like, well, this is real, we are right here,” says Hupfield. “It’s interesting that in that action we were suddenly marked as visible in a space where we are not usually visible.”

Hupfield also said that the Whitney action fit in with a general “political movement around transparency and accountability” that’s especially visible in New York at the moment.

Recent decisions by prominent museums leave Hupfield hopeful about the outcome of the action—even though Kanders himself has stated that “I think it is clear that I am not the problem [protesters] seek to solve.”

When asked about the possibility of these kinds of actions and protests at museums in Canada, Hupfield didn’t rule them out—but she also noted differences in scale and funding models between the US and Canadian art worlds.

“The thing I really pick up on here, as someone from Canada, is how big the market is, and the structure of the institutions,” says Hupfield. “There are so many artists and so much money at a level that is beyond anything I could have ever imagined…in terms of how much money people have and how much is spent on the arts. As an artist making art [in the US], I think about how I’m implicated in all of that just through my profession—and not necessarily out of choice.”