In Canada, Too, COVID-19 Impacts Commercial Art Dealers—and Their Artists

A new international study has shown a 72 per cent slump in gallery income worldwide due to COVID-19 crisis, and Canada is not insulated from that 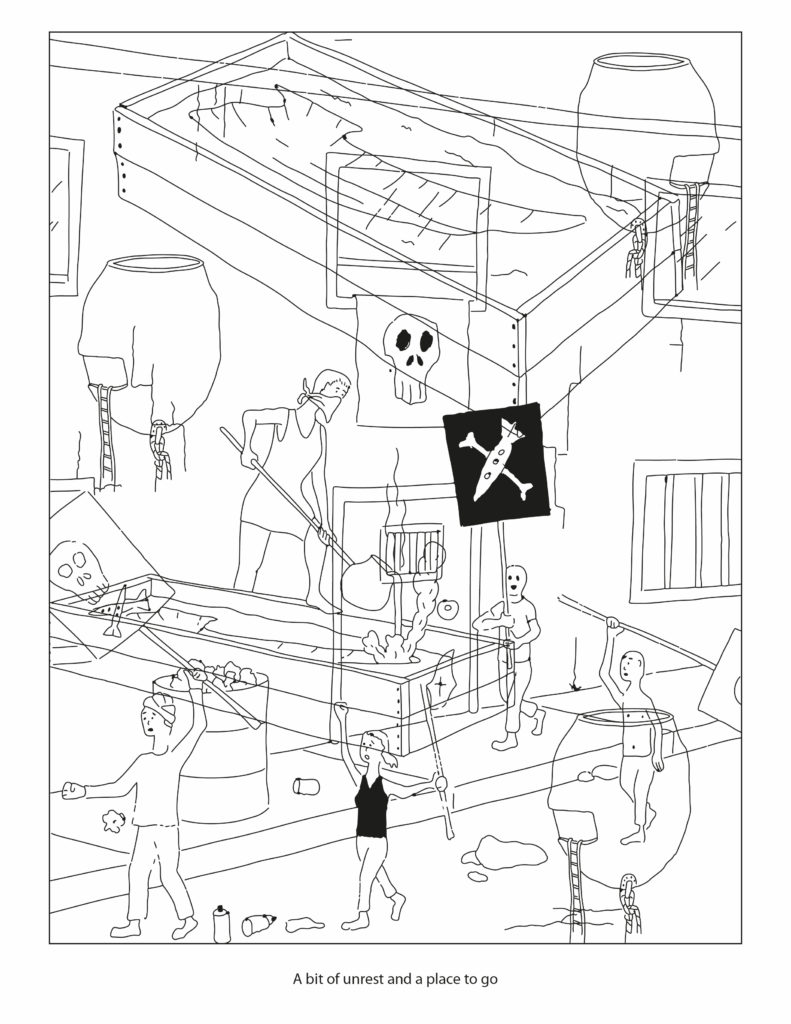 If proof is needed that art dealing has changed in Canada lately, Calgary’s Deborah Herringer Kiss—who’s been foregoing white-cube face-to-face dealings for contactless transactions on black asphalt—can offer it.

“On Monday, I did a highway pickup of a piece that a client needs framed. We pulled over on the side of a highway and she opened up her trunk and I took the piece. I felt like a whole different kind of dealer!” Herringer Kiss says.

That’s just one part of the “new normal” for commercial art galleries in Canada—along with things like “Inisolation,” the free downloadable-art-editions project that gallery artist Aron Hill created with Herringer Kiss and others over the past few weeks.

“We’re going to start offering one work every week at a special price, all under $2,000 so that the artists will still be able to get the Canada Emergency Response Benefit,” Herringer Kiss notes. And when her gallery reopens physically, it will—in addition to lots of hand sanitizer and distancing guidelines—be offering a free print multiple by award-winning Alberta artist Katie Ohe to help get people through the door.

Whether these adaptations to coronavirus will be enough to survive, though, is a big question Herringer Kiss and many of her industry colleagues are facing right now.

A new survey predicts a 72 per cent fall in art-dealer revenues worldwide due to the COVID-19 crisis, with 34 per cent of commercial galleries—especially smaller ones—believing they will not survive the crisis.

And Canada is not insulated from these trends.

National art dealers associations recently sent the Heritage Minister a plea for rent relief and eviction protection—though many dealers are trying to cope in other ways, too

Just last week, on April 21, two of the nation’s largest commercial gallery associations—the Art Dealers Association of Canada (ADAC) and the Contemporary Art Galleries Association (AGAC)—sent a letter to Heritage Minister Steven Guilbeault asking for “emergency rent relief,” eviction protections and the ability for “art dealers…who pay themselves a salary to use CEBA loans, or the Emergency 75% Wage subsidy, or other assistance programs, to pay their own salaries.” (That letter follows a similar one ADAC had already sent to Finance Minister Bill Morneau in March.)

Though the federal government did announce the Canada Emergency Commercial Rent Assistance program for small businesses just a few days after that letter, many galleries and other small businesses remain concerned—often because the new program hinges on commercial-landlord willingness to give up 25 per cent of regular rental income.

The COVID crisis “has definitely had a negative impact on gallery businesses, as many have had to close physical spaces, but still pay rent—which is usually their greatest expense,” explains Joseph Rumi, ADAC board president and president of Rumi Galleries in Oakville. “Many of the relief measures that the federal government created have provided some assistance, but they aren’t helping those in our industry that are most vulnerable, which is why ADAC and AGAC are advocating for change.”

Rumi says he has seen many galleries in Canada move operations online and implement contactless delivery—but there are losses still afoot on micro and macro scales.

“The crisis has slowed everything down, which is why it is so important that we all support each other by keeping things moving as best we can until the economy begins to normalize,” Rumi says. “If galleries aren’t able to promote and sell artists’ works, then not only do the artists, galleries and gallery staff suffer, but so, too, do the other countless members of our community who rely on commercial galleries—framers, restorers and conservators, art shippers and handlers, art installers, art fairs, photographers, art publishers, printers, museums, scholars and academics,” and more. 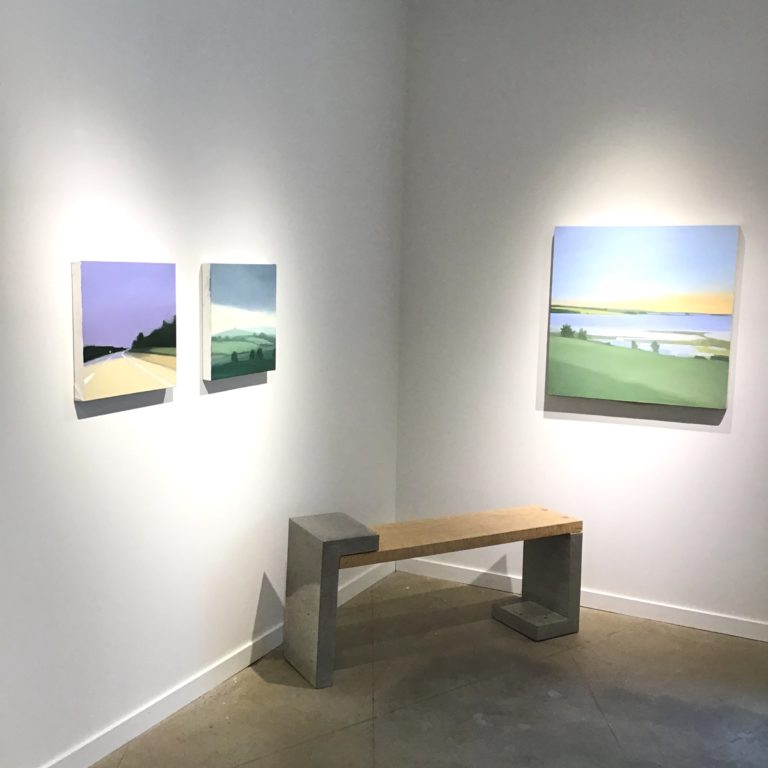 Paintings by Sara MacCulloch were installed as previously scheduled at Studio 21 in April 2020, even though few can visit. 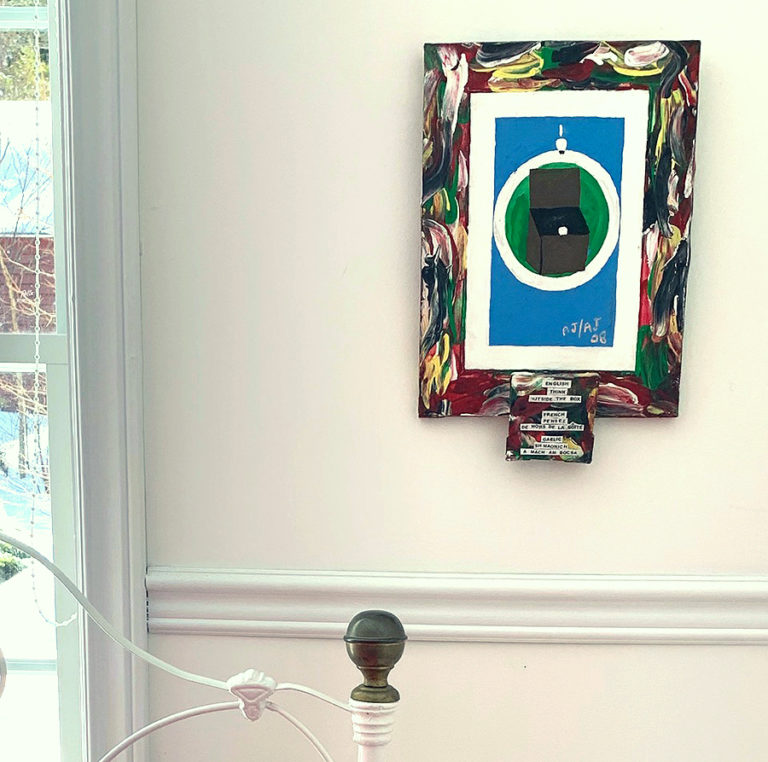 View of a cardboard collage piece by AJ Aucoin installed in a bedroom: one of the photos recently submitted to Studio 21’s new “Art at Home” online initiative.

Artists, too, rely on art sales for part of their income—a fact that Vancouver artist Lyse Lemieux has been trying to highlight on her own social-media feeds since coronavirus closures hit many Canadian galleries in mid-March.

“I wish more people would take this time to buy local artists,” Lemieux tells Canadian Art. “Now, more than ever, we need that support.”

Lemieux says she has been checking in with commercial galleries in various cities and affirms many are still there to sell that local artists’ work—even if it is at a distance or by appointment only.

“Artists work for a year or two on a body of work and then hopefully it gets shown at some point,” Lemieux says. “Now it’s probably not going to get shown for quite a while.”

Lemieux remains concerned, she says, about both the short and long-term implications of this crisis for the arts community—a concern many dealers share.

Soon after it closed to the public in mid-March, Studio 21 Fine Art in Halifax also used its email updates to remind clients that “artists’ careers rely upon your ongoing interest and investment in their work.”

Studio 21 also opened an exhibition of paintings by Sara MacCulloch as scheduled on April 3—albeit by appointment and via online only.

“People don’t always connect wanting to buy a piece of art with the idea that they are having a direct impact on an artist,” says Deborah Carver, director of Studio 21. “But it is a large part of what they are doing. And it’s pretty immediate.”

Since the crisis hit, Carver says she has “made a few sales—not a lot,” though she’s heartened to see some corporate and private collectors step up to make purchases at this time.

Studio 21 also saw a “huge response” in community engagement, Carver says, with its project Art at Home. That project encouraged people to send in photographs of artworks installed in their own homes. 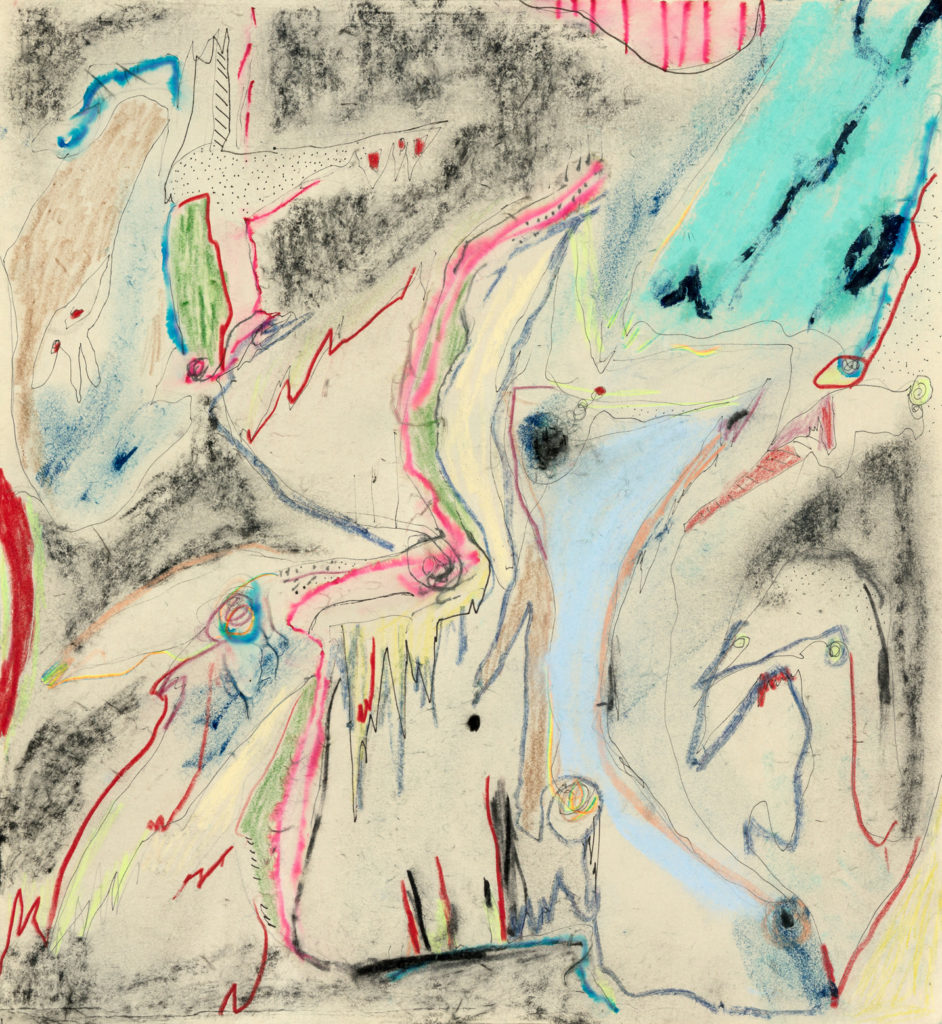 The first project on his new platform, “A Human Touch,” was created in close collaboration with gallery artists—several of whom, says Charbonneau, have had major museum and non-profit gallery projects cancelled or postponed because of the coronavirus, and decided to make works specifically for the new online platform.

“Manuel Mathieu was supposed to open his show at the Montreal Museum of Fine Arts this week,” says Charbonneau. “For Mathieu, this is a lifetime achievement.” (The museum does hope to reschedule Mathieu’s show for the fall.) Moridja Kitenge Banza, also connected to Charbonneau’s gallery, was due to go to the Dakar Biennale in May to help present a project by local artists—another major cancellation or delay.

In the interim, Charbonneau says, he is encouraged to see museums and other collections start to adjust their acquisitions policies to actually purchase art online or at a distance. The Musée d’art contemporain de Montréal also just committed to purchasing only Quebec artist works for 2020.

Charbonneau is also trying to look at what helped other dealers internationally survive previous downturns in the art market: “If you look back to 2008, that’s when someone like David Zwirner really came out strong…he would allow people to dream, he would allow his artists to do great projects.”

Collaborations, custom online platforms, downloadable editions and publishing projects are some of the ways dealers are attempting to work during the crisis—but it can be tough in a sector where much has relied on face-to-face meetings

Stephen Bulger, director of Stephen Bulger Gallery in Toronto, has been dealing in photographs nationally and internationally for 25 years—and he has also been reflecting on his experience in the 2008 downturn and what’s changed since then.

“When the [2008] economic crisis happened, there was a lot of uncertainty, and a lot of us, I think, were kind of wallowing for the first month or two,” says Bulger, “whereas here, I was much quicker on my feet, thinking, What can I do differently now to ride out the next two to three months? Or for an even longer period of disruption?”

Bulger was due to be the only Canadian dealer participating in the first edition of Paris Photo New York in early April—yet another art-world cancellation due to coronavirus. He says that he hasn’t applied to any other fairs for 2020, because “I’m not sure people will be psychologically ready,” even if and when restrictions lift.

Bulger remains concerned about what he calls the “domino effects” of major postponements and delays in the international art system, both institutional and commercial—ones that he sees resonating “six months or 12 months or 18 months” into the future.

“This week, we heard that Rencontres d’Arles [in France] was cancelled, and that affects Deanna Pizzitelli, because she was nominated for an award there,” says Bulger as one example. “What they do with that prize is exhibit young talents around the world, and we just found out they are not proceeding with that…. It was a great networking opportunity, and so much of this business relies on face-to-face contact.”

Though that particular Arles project will proceed on the web, “Deanna’s work is concentrated so much on the object as much as the image [that] her work may not be very well represented online,” says Bulger.

Bulger says his gallery business has been helped in recent weeks by the fact that he already had an e-commerce platform, ffoto.com, that has seen an uptick since coronavirus closures. Sales of photo books the gallery sells have also been up on abe.com.

And Bulger, along with some other Canadian dealers, has also been invited to do some specialized online auction partnerships with Heffel Fine Art Auction House. Bulger’s launches in the middle of May at heffel.com; currently that website features a collaboration with Montreal dealer Simon Blais. 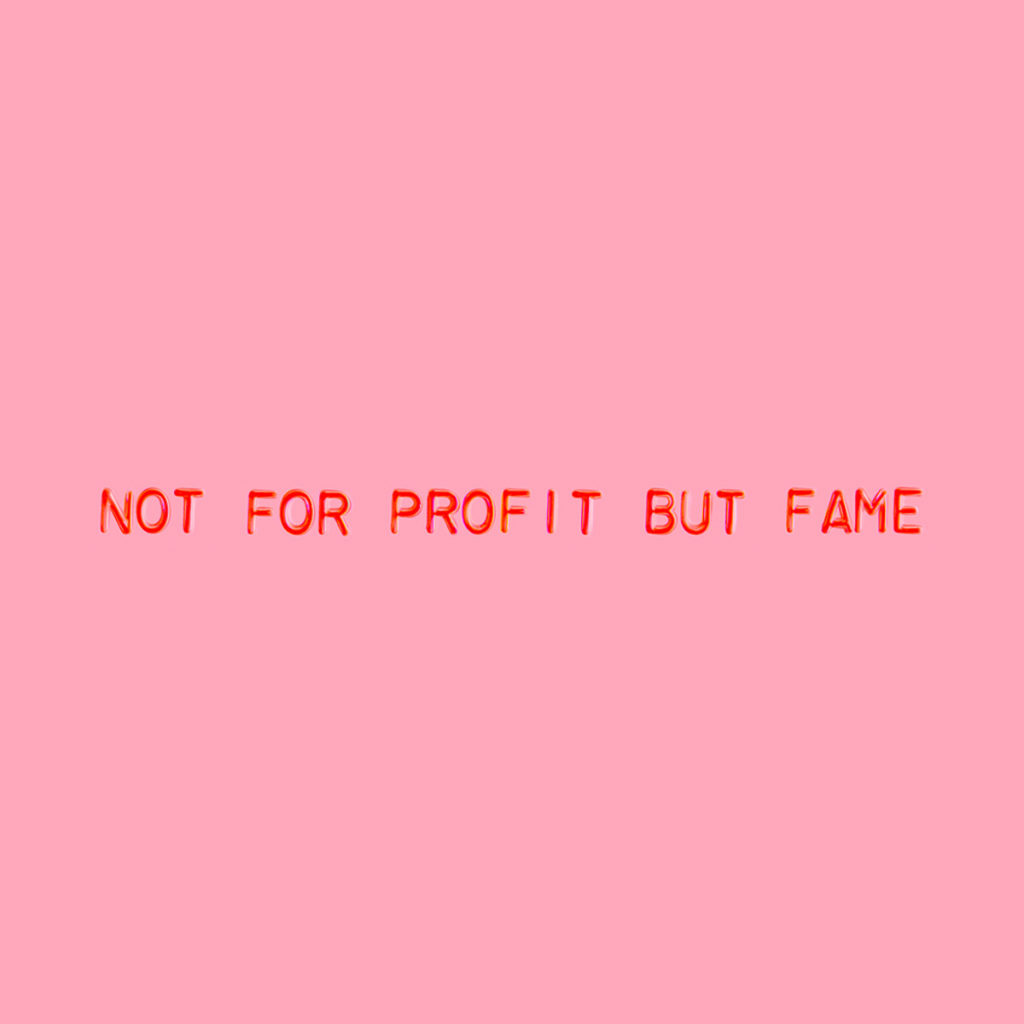 Darija-Radakovic, Not for Profit but Fame, 2020. Free downloadable edition created for the “Inisolation” project with Herringer Kiss Gallery.

Indeed, collaboration is another theme that seems to be emerging in the Canadian commercial scene as coronavirus closures continue.

“I think the collaboration component is certainly going to beneficial for us given that we are pooling our resources,” Brown-Jowett says. Affirms Patel: “There is a shared hope, motivation and accountability that comes with collaboration.”

Patel Brown is hoping to open a physical space in Toronto this summer—but is also looking to some online projects, specifically the commissioning of critical essays, to drive conversation while many galleries are closed.

“This [essay] initiative was definitely accelerated by COVID, but I think also we thought, ‘Okay, this is the perfect time to activate a focus on criticality and writing,’” says Patel. “People are being bombarded with images, but we are asking people to stop and take a moment to consider what they are looking at from a deeper place.”

But uncertainty still pervades—for this gallery and many of its peers.

“We are hoping people can come into the space in the summer,” says Brown-Jowett. “We’re just not sure how that will look.”