How Do the Latest Federal Culture Funds Actually Break Down?

Heritage Minister Mélanie Joly recently announced $125 million in new culture funding and export initiatives. Here’s how it breaks down, and how some art businesses are affected

On June 26, Canadian Heritage Minister Mélanie Joly announced $125 million in new funding for culture in Canada—including the launch of Creative Export Canada, “a new funding program that will help global creators stand out in the global market,” the PR promised.

After the initial flurry of media attention on the funding, key questions remained: How does that new federal money actually break down? And what are the consequences, if any, for contemporary art and related businesses such as private art galleries and dealers? These factors were difficult to parse in initial releases, which highlighted “music, film, books, video games [and] virtual and augmented reality or design” as possible beneficiaries of the plan, as well as assisting “small and medium-sized businesses” in particular—but not once mentioning contemporary art.

It’s not as if Minister Joly is unfamiliar with contemporary art and its economies. From 2008 to 2013, she was a board member at the Musée d’art contemporain de Montréal, where she helped found the young-patrons fundraising event Les Printemps du MAC. She has also described herself as an art collector, and in April dropped by the Papier art fair in Montreal, one of a number of national and international art fair events that are key to how commercial galleries develop new markets and meet new buyers. But there was little in the new funding that specifically called out contemporary art or galleries.

“I noticed they didn’t mention art in their announcement, and it seems part of an ongoing thing of not recognizing that there are functioning businesses that can create things like employment and job growth” in the art sector, says Peter Gazendam, director of Catriona Jeffries in Vancouver. Just last month, that gallery was at the prominent art fair Art Basel in Switzerland, bringing Canadian art to a global audience and market, with Vancouverite Ron Terada’s paintings noted in “10 of the Best Artworks at Art Basel 2018” by Artnet News. At the same time, Gazendam notes, “any increase in supporting what we do would be extremely helpful”—even if the nature and quantity of support provided by the new federal framework is not yet crystal clear.

How The Funding Will Be Distributed

Follow-up with Canadian Heritage media relations yields the following details about how the $125 million actually breaks down.

First, the $125 million is spread over 5 years, so actually $25 million per year—with the 2019 election result perhaps determining if the full promised amount will actually be disbursed.

Second, that $25 million per year is spread out in the following way: $5 million per year will go to existing Canadian Heritage programs largely unrelated to contemporary art, such as the Canada Arts Presentation Fund, Canada Book Fund, Canada Music Fund, Canada Periodical Fund and Telefilm Canada. $6 million per year will go to increase capacity at Canada’s embassies and consulates for supporting creative industries in New York, Paris, London, Los Angeles, Berlin, Shanghai, Mumbai, Mexico City and Tokyo, as well as offering support internationally to culture industries through advice of the Canadian Trade Commissioner Service. The remaining $14 million per year will go to Creative Export Canada to “fund export-ready projects to enhance the discoverability of Canadians’ content abroad,” as well as fund trade missions and international trade events including Canada’s spotlight at the 2020 Frankfurt Book Fair.

In recent years, the main fund that contemporary art dealers have been able to access to support international travel and circulation has been the Arts Abroad program of the Canada Council for the Arts. The new Creative Export Canada program promises to provide new avenues beyond that.

“Entrepreneurs and organizations from the contemporary art industry will be eligible to apply for Creative Export Canada funding for projects that generate export revenues and help Canadian works shine,” says Tim Warmington of Canadian Heritage media relations services in an email. “They will also be able to participate in creative-industry-focused trade missions and major international trade events that can open business opportunities and facilitate commercial exchanges.”

Art galleries and other contemporary art businesses will also be able to access knowledge resources funded in the new package, Warmington says. “Canada’s network of cultural officers in Canadian Embassies and Consulates will be available to provide direct on-the-ground support to professionals from the contemporary art industry who are ready to do business and present in foreign markets,” Warmington adds. “In addition, trade commissioners will assist in connecting companies with local contacts to help them access opportunities and build partnerships, for example, with local art dealers or corporate art consultants.”

Dealers Welcome More Support for Art Fairs, Even if Imperfect

Overall, the funding is welcome news to leading Canadian galleries—particularly in the era of large and costly international art fairs. “I certainly don’t think I would have seen the successes that my gallery has seen if I’d only had a local audience,” says Simon Cole, director of Cooper Cole in Toronto. His gallery’s current program includes Frieze New York (where Cooper Cole recently won the Frame Prize), Frieze London and NADA Miami, and the Independent, among other events. “The Canada Council has been very generous with us, but it’s still a huge financial commitment…and the fairs have been so beneficial for us in terms of exposure and giving artists we work with international opportunities. I think it is a very important platform.”

Even amid recent international talk on the problems of the art-fair model, other leading Canadian dealers also agree that they are necessary in the absence of alternatives. “I do believe there are fundamental problems with the art-fair model,” says Megan Bradley, director of Parisian Laundry in Montreal, which has been at the Armory Fair in New York of late as well as Art Brussels and Art Los Angeles Contemporary. “But no matter what, it is kind of a necessary evil—it’s very rare that you would have any other opportunity to literally expand your market over the course of five days” as well as “add a number of people to your mailing list who actually buy art at the fair or buy art down the road.”

“We are always very careful about what we do in terms of art fairs,” says Peter Gazendam of Catriona Jeffries in Vancouver. “We have pulled back from a number of them because they haven’t been as effective as before, or been a good context for the gallery.” But, “from a business perspective,” he adds, “if we would be able to have more flexibility in participating in, say, Art Basel Hong Kong, it would help immensely.”

But Support Beyond Art-Fair Models Needed, Too

Increased funding options are “about being able to have conversations with curators and museums,” says Gazendam. “It’s about being able to say, ‘OK, well, we will be able to apply to this fund to support this touring exhibition that will go from, say, Oakville to Switzerland….We do it all the time, for example with the Musée d’art contemporain de Montréal show for Liz Magor, we helped facilitate its touring exhibition which went to Zurich and Hamburg.”

The new federal strategy’s promise of support in making connections in different centres and cities through embassy and consulate support is also dearly needed. “If you do a pop-up [internationally] it can be hard to build an audience in a new place,” says Megan Bradley of Parisian Laundry. “But if it’s through the embassy, they can actually have a network that will come and participate and spread the word—that is really helpful in these kinds of situations.”

This week, the Bank of Canada unveiled a commemorative $10 banknote that is the first to contain imagery by an Inuit artist. 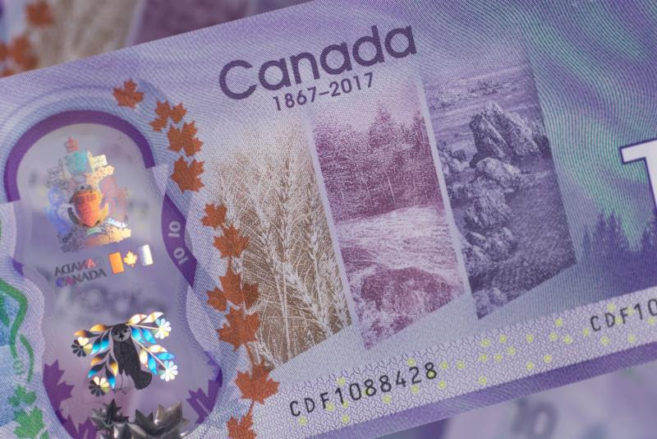