In 2015, Vanessa Gravenor was injured by gunshots in Paris. This summer at New York’s Park Avenue Armory, she performed a new work rooted in those experiences of trauma 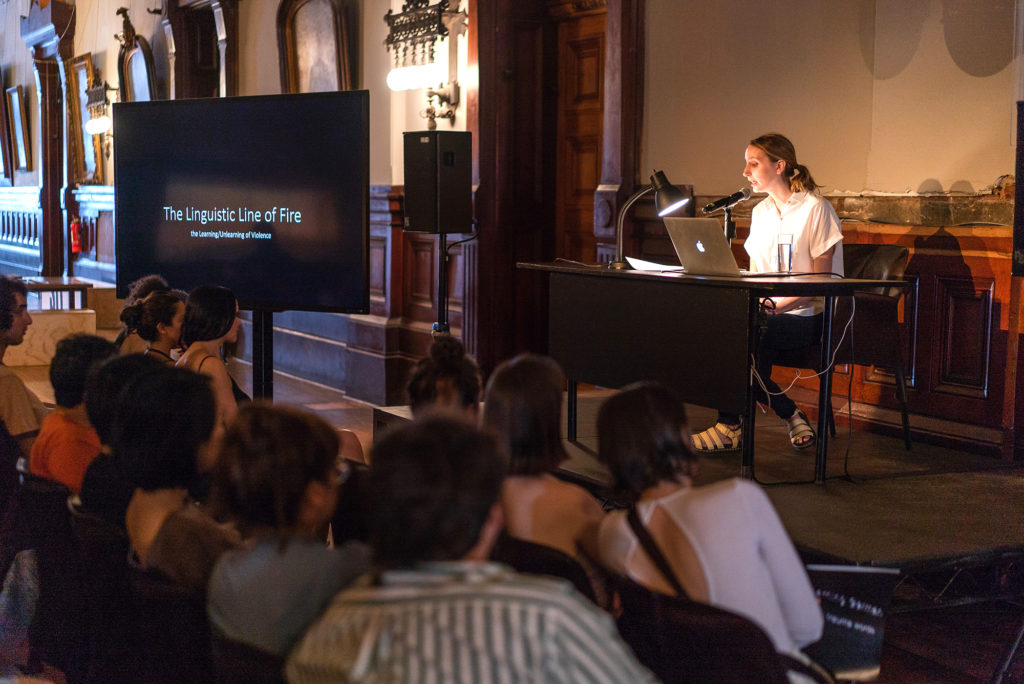 On November 13, 2015, Canadian artist Vanessa Gravenor was shot during ISIL terrorist attacks in Paris. Her injuries required surgery, as well as PTSD therapy in Germany, where she was a student.

In the years since, Gravenor has started to make art related to terror-based violence. Her latest such work, titled Learning/Unlearning of Violence, is a lecture performance that premiered June 29 at the Park Avenue Armory in New York.

Gravenor was invited to present the new piece in New York by internationally renowned German artist Hito Steyerl. Steyerl is a former teacher of Gravenor’s and is currently presenting a major new commission at the armory called Drill, which looks at gun violence in America.

“It’s the first time we collaborated,” Gravenor says via email of her work with Steyerl in New York. It’s a link that makes sense, given the artists’ shared interests in exploring violence and global conflict.

Accordingly, Gravenor’s performance lecture on June 29 suggested how “linguistic lines of fire” can be forms of proximal violence.

The artist delivered her 50-minute performance lecture sitting at a desk with a single lamp, in front of two screens, in an armory whose basement walls are still riddled with bullet holes from its past use as a shooting range. There, she spoke about the vocabulary that the Reagan, Clinton, Bush, Obama and Trump administrations have used to justify armed interventions—such as the terms “outlaw” and “rogue.”

During the piece, Gravenor also delved into how, in the 1980s, American agencies such as the United States Agency for International Development (USAID) helped develop anti-Soviet textbooks for distribution to schoolchildren in Afghanistan. Some of these books have been more recently used by the Taliban to indoctrinate children.

“Dear students! You should know that in the past before arrival of the Soviets, our country had a more beautiful spring,” says one of these Grade 1 textbooks, in a passage ostensibly about the seasons. “Our people used to be happier during the spring season, they would celebrate the coming of this season, but since the wild Russians have attacked our country, our people have forgotten everything and have lost their happiness.”

In addition to translations of select passages from these books, Gravenor presented some animations based on them at the performance lecture. The visuals were telling: some of the books included exercises that used Kalashnikov bullets and AK47s as counting tools.

“I had to do a lot of research during the making of this work, since I was only familiar with basic facts about the Soviet–Afghan war before,” explains Gravenor via email.

Imtiaz Gul’s The Most Dangerous Place was useful to Gravenor in learning about USAID-funded textbooks like The Alphabet of Jihad Literacy—and later coverups around them. “He had some candid interviews with people talking about the USAID-financed books,” says Gravenor.

Research was also a key part of Gravenor’s past works on these themes. Her 2016 video Me/My Bullet examined the history of the Kalashnikov bullet—the kind that struck her in Paris. Her 2018 work Learning German with Trauma Words, like the new Learning/Unlearning of Violence, also integrated her experience of having to learn, post-Paris, many German words related to trauma, such as “kugel” (bullet), “gewehr” (rifle) and “zerstören” (destroy).

Overall, the way Gravenor interwove narratives in her recent performance lecture illuminated the power of language in relation to world conflict.

“Words [are] agents that go waywards,” Gravenor observed at the armory on June 29. And in this most recent work, she made a poignant case for how forms of violence are continually reinscribed on the bodies and minds of victims.

Yasmin Nurming-Por is a curator and writer currently based in Toronto.