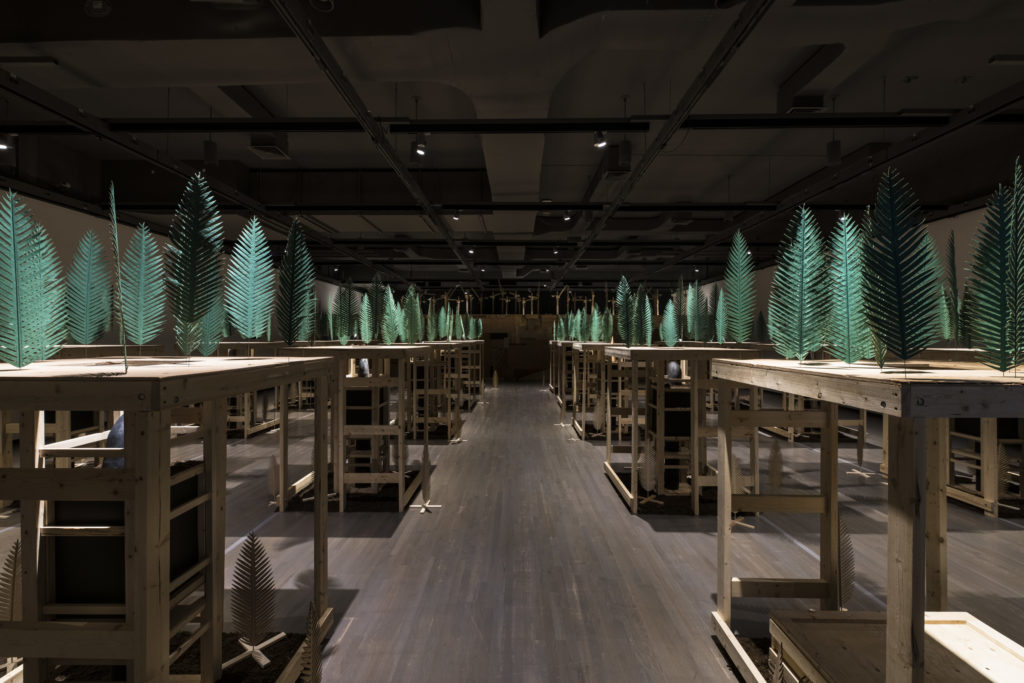 Yaniya Lee: What made you decide to go underground, to dig into the soil, for this exhibition?

Rita McKeough: Well, I think it came from my last exhibition, “Veins,” which was really about a relationship to the risks and consequences of the pipelines. I was imagining that the land itself—the trees and the roots and the plants—would rise up and interact with the pipelines and try to protect the earth against the contamination and toxins coming from leaks and excavation, mining and oil extraction.

I thought, if I go down a little beneath the surface, I’ll start to really see not only the layers and layers of history of plants, animals and people that are composted down there, [but also] the relationship of all [that is] constructing this earth, [and] that is then creating homes and habitat and food.

I think by understanding something and questioning what we know and don’t know, there’s a potential for empathy. And I always equate empathy with dialogue, conversation, hope, activism and social change.

YL: In the first part of the exhibition, there are projections on two walls; the area is covered, so it feels like you’re underground; and you hear the voices of two speakers having this very anxious conversation.

RM: Yes, there was a bear and a cranberry. I wanted the animals and the plant world to be able to speak. It was very much like a walkie-talkie conversation between Bear and Cranberry: “What’s happening over there?” “The blueberry’s buried, have you found any remains?” The cranberry is trying to understand what’s going on and the bear is describing what’s been destroyed. Hopefully the listener can create this kind of empathy, because it’s a perspective that is a little shifted from a human perspective—[you’re asked to] imagine what it might be like to have your habitat and your home displaced by construction and excavation and extraction.

YL: You were performing on opening night dressed up as a human-sized squirrel.

RM: I was dressed as a squirrel that was running the hospice for the ferns. Once you pass through the burrow and you move into the extraction field, the ferns are standing on top of the machines, infiltrating, overpowering and growing on top of them. The ferns are speaking to the viewer and describing what’s going on, but they’re on the front lines and also trying to speak to the machines. Some of them are damaged and some of them are injured. So, there’s a hospice that the squirrel is running, which is trying to help these ferns. 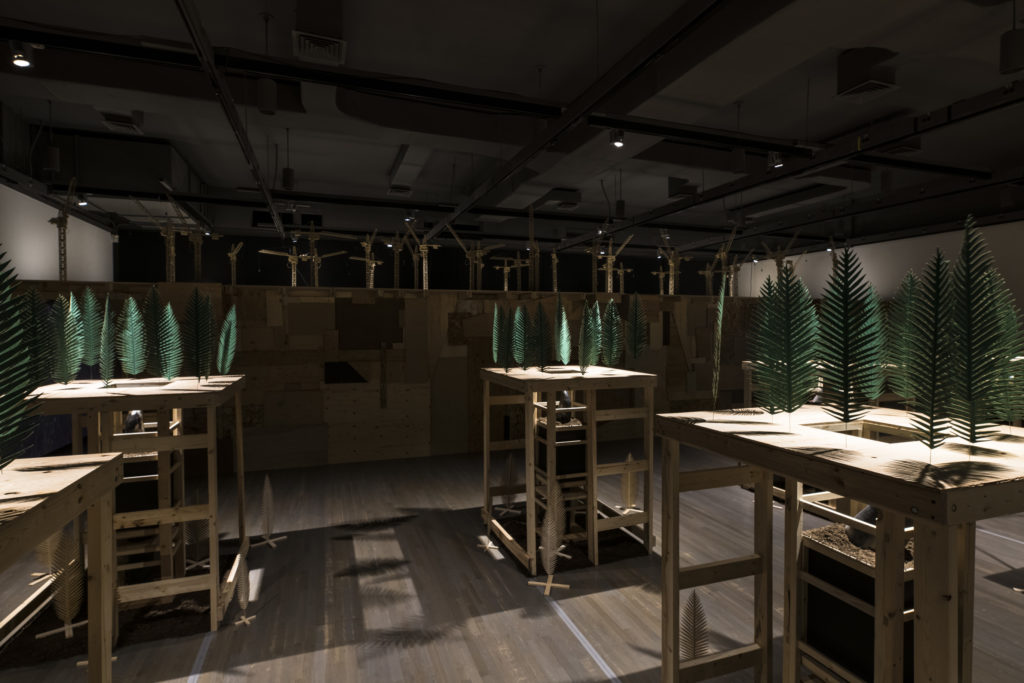 YL: Beyond the burrow, in the rest of the gallery, is what looks like a huge field. There are rows and rows of these constructions that seem like oil-drilling rigs. They have sensors that automatically start them pumping as you walk through.

RM: I looked at a lot of images of old goldmines and structures that bring resources out of the ground, like the really early towers for extracting oil that were made out of wood, and also the old coal mines. I was looking in Alberta and BC, and I used those images to create an object that is all about extraction. It has a centre core that goes down and down and brings the darkness to the surface. It’s an idea of this darkness that I really see as being the resource itself, and also our desire, the desire that’s running the machines to pull everything out of the ground. And the ferns say, “These machines, they take everything that is not them!”

The darkness is also the richness and complexity of the soil, where the plants and animals are living and where their remains are buried. Instead of bringing up gold, coal or oil, the machines bring up a great big claw or thorn, something from the land itself. It’s a warning in a way. Like when you’re petting a cat and its claws come out, like, “That’s enough!” We’ve taken enough.

I use the word machines because I don’t want to generalize. There are so many culturally specific relationships to land that aren’t the one that my understanding comes from. We have so many different perspectives on the land and animals and plants that I certainly don’t want to generalize that. So, it’s not about people in general, but [about] the ones who are running the machines, and the companies and corporate capitalist systems that are running these machines in extraction fields. That’s why I’ve used the idea of machines, because it represents the capitalist system of multiple extractions simultaneously in large, large quantities.

I’m implicated in everything and I’m trying to figure it all out.

YL: You titled the exhibition “darkness is as deep as the darkness is.” Thinking of the way you were describing darkness, there’s a duality to it. Darkness is always characterized as bad, bad, bad, but you create a situation where viewers finds themselves going underground, and although underground is being threatened by what’s happening above ground, it’s essentially not bad to be in darkness.

RM: Yes, that’s right, because there’s a richness to the soil that’s about the darkness, right, as in the richness of life and culture down there. And there’s darkness of another kind. The 35 oil cranes digging and working up above [in the installation] are in contrast to that darkness, that richness—I think of it as a culture.

I use these big, red and exuberant roses…they call you with love in a way, and when you listen to them, one is crying, some of them are singing to the other ones to comfort them and [some are] calling out to the viewer. [But] their voices are distorted and broken apart by the toxins in the earth. A few of them are very brave, and they call out to the viewer, “Come closer. Hey, come closer. We need your help.” And it stops there. It doesn’t say what to do.

I’m implicated in everything and I’m trying to figure it all out. But I believe that if we work together, there’s power there. We share resources and knowledge, we collaborate, we come up with ideas.

YL: Could you talk about how you incorporate multiple voices? I know sound is a large part of your practice. How is that present in this exhibition?

RM: Well, first in the burrow there’s a kind of vibration in the air. The ground is falling. I tried to use sound to create a sense of disruption and static and tension in the space as it’s going through its destruction.

Where you step out into the extraction field, I wanted to create a very visceral, emotional space with the sound. So, there’s a cello and bass guitar, and all kinds of mediations of the voice. I recorded it with my friend Audrey Burch, who did the voice, the bass and the cello. And then I cut it all up and layered it over and over again to create the structure, [as] a kind of calling to the viewer.

My hope is that instead of just hearing the words that the ferns are saying, you feel and hear that history they’re speaking about. The body of the fern is articulating the relationship to the machines themselves. The ferns talk about these machines full of dark, empty space. They are pulsing with wires that flow like blood. They rattle and grind and suck up everything that is not them. They’re trying to communicate with the machines and get them to listen. And so are the cranberry and the bear in the burrow. The ferns are also talking to the viewer: “We absorb these toxins into our tissues and transform them…What else can be done? What could you do? What could we all do to transform these poisons?”

YL: Can you speak about the talking roses?

RM: The roses are from a piece called Tower of Silence. They were very subversive, laughing feminist roses in a performance at the St. Norbert Arts Centre [in Winnipeg] about the silencing of women within certain kinds of institutional contexts. And now, [for this exhibition] there is sobbing instead of laughing because the earth that they’re in is very, very contaminated. 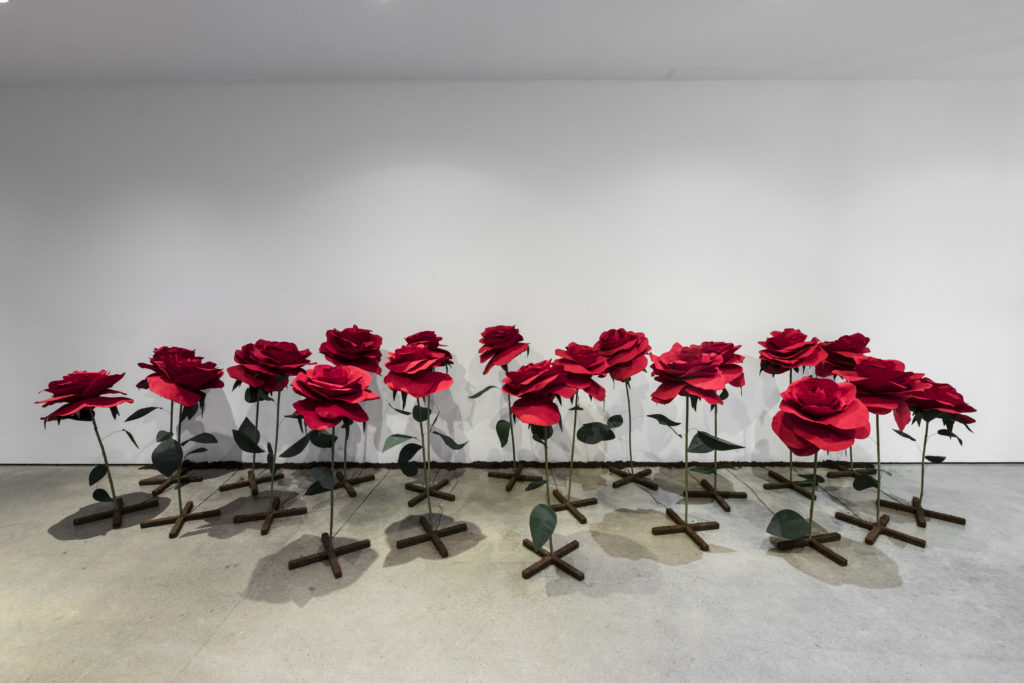 YL: The exhibition text, too, suggests that we’re all implicated at microscopic or larger levels. Could you describe how you’re recycling and reusing your own work as a way to negotiate your implication?

RM: It’s kind of a turning point within my own practice. I’ve always tried to recycle—like, I’ve got two-by-fours that have been through three or four exhibitions. And all the material for the underground part is recycled from the woodshop at the Banff Centre and from the gallery scrap pile. I also try to give everything away or recycle it to another artist. The wood that I did have to buy is all going to another artist after the show.

Taking [from] my own work…for example, the cranes, I thought, “This is the image, the gesture, that I need towards the disturbing of the land.” Instead of making it again, I’m going to reuse what I have, because I realize that I’m totally implicated in the resources that are used for my practice. I’m really trying to shift away from having such a footprint in terms of material and environment. 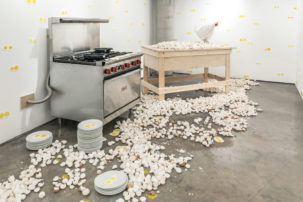 Rita McKeough’s installation The Lion’s Share strategically yet playfully immerses its audience within the inner workings of a bizarre faux diner.

For 30 years, award-winning artist Rita McKeough has been an energetic creator and influential teacher who forgoes separating art and life. Discover why in Diana Sherlock’s in-depth feature from the current issue of Canadian Art. 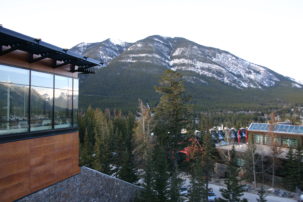 An open letter that started circulating this week, and signed by several prominent artists and curators, calls for centre leadership to shift priorities