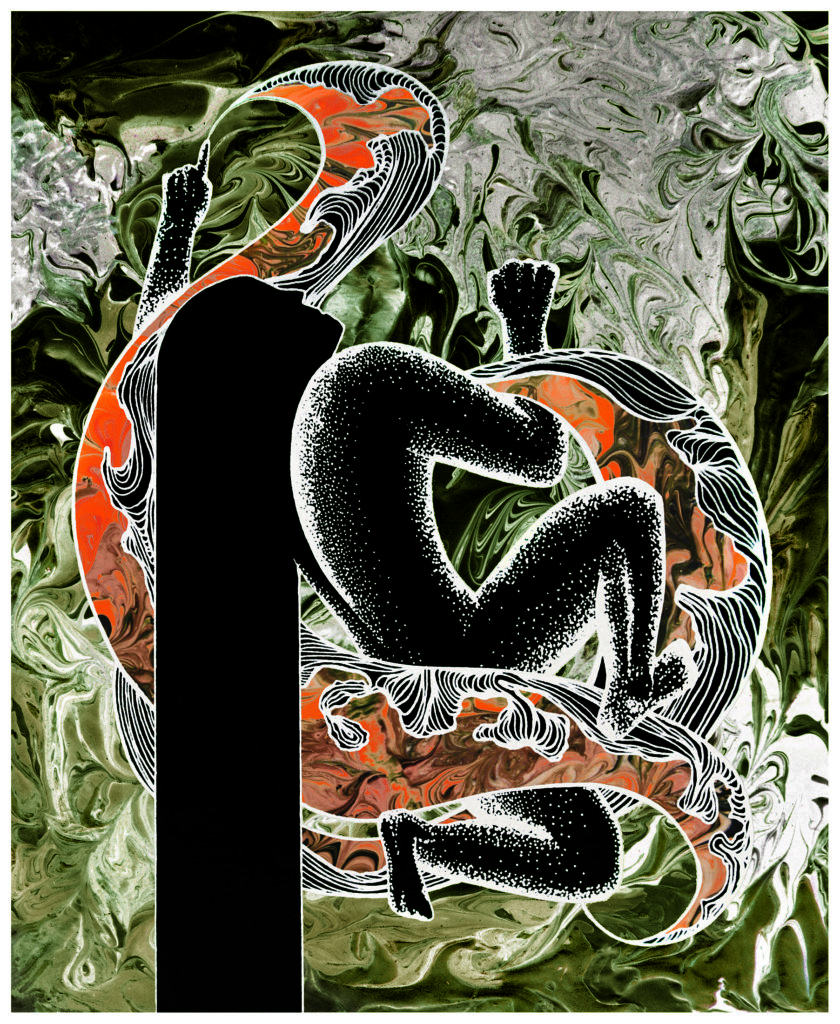 In Ban en Banlieue (2015), a book that phenomenologically queries that which lies outside of time, author Bhanu Kapil asks: “What…is born in England, but is never, not even on a cloudy day, English?” I followed this line of inquiry, and now I ask: What is born in a body, but is never fully bodied? This sense of unbodiedness, of having been made to be unbodied, to be that which disturbs the idea of the body and of embodiment themselves, is, I would wager, the sensation of Indigeneity. The fundamental violence of colonialism, then, is perhaps the inculcated sense, a sensation that bubbles up most acutely by way of the physiological, that your body is not yours to keep, that it is never solely yours to maintain sovereign control over. If I wanted to tell a social scientific story about this kind of unbodiment, if you will, I would nod to the ways sickness and Indigeneity operate as co-animating categories on the reserve. This is not, however, the story I want to tell here (and I’ve told it elsewhere); what I want to do is think instead about how we might begin to put to rebellious use the unbodiment of Indigeneity.

Love, says Laurent Berlant in an interview with open-source publication Nomorepotlucks, “always means non-sovereignty,” if we think of love as that which pulls us outside ourselves, as that which opens us up to a temporality that feels like it will rupture the epistemological ground beneath our feet. Berlant insists that love requires that we violate our own attachments, that we give into instability, that we accept that turbulence is the condition of relationality as such. We might argue, then, that love is a process of becoming unbodied; at its best and wildest, it works up a poetics of the unbodied.

In summer 2015, I dated a guy, my age, who told me he loved me on the second date. I was put off, stunned; love takes time, I thought. But soon, I fell in love too. If I know anything now, it is that love is the clumsy name we give to a body spilling outside itself. It is a category we’ve pieced together to make something like sense or reason out of the body failing to live up to the promise of self-sovereignty.

Let’s consider a passage from Leanne Betasamosake Simpson’s beautiful and world-making collection of stories and songs, Islands of Decolonial Love: “i think we fucked, and maybe i should say make love, but maybe not because we didn’t actually make love. it was sadder than that. we were sadder than that. but it wasn’t bad and it wasn’t wrong. it wasn’t desperate. i think it was salvation.” Unbodiment is the “sadder than that” of love, but it is also love’s first condition of possibility. That Indigeneity births us into a relation of non-sovereignty is not solely coloniality’s dirty work. No, it is also what emerges from a commitment to forms of sociality that begin from the notion that the body is an assemblage, a collage of everyone who’s ever moved us, for better or for worse. What colonialism produces is competing non-sovereignties: the bad nonsovereignty that distributes lethal forms of precarity to surplus populations and the good non-sovereignty that makes us submit to a world-to-come, to the feeling of salvation. To be “sadder than that” is thus not impossible within a scene of love-making. In summer 2015, I was “sadder than that,” but I made love anyway and it felt like salvation. This is what Indigeneity intimates: a form of love enlivened by those who are “sadder than that.”