On Translating the Untranslatable 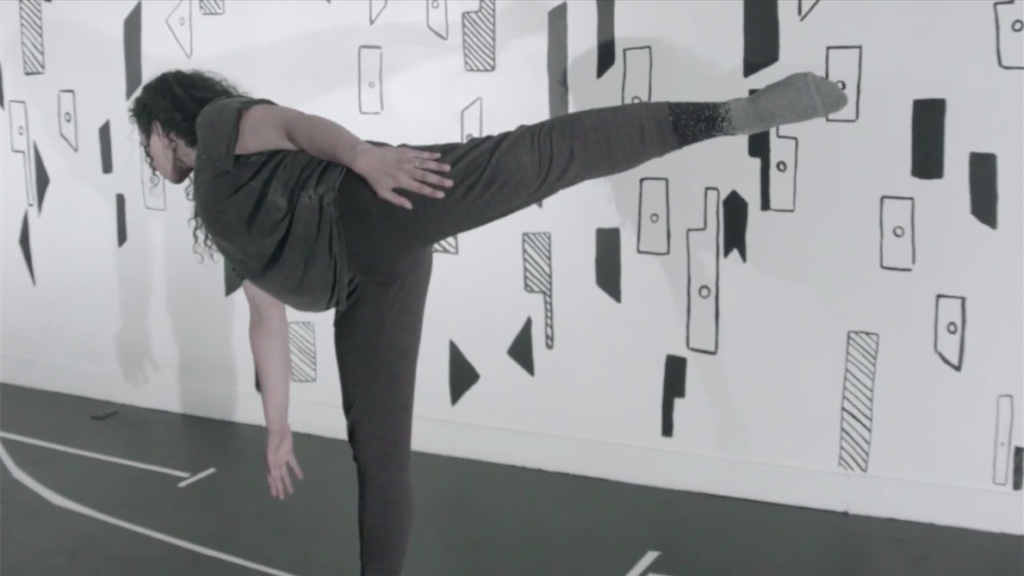 What happens when we try to translate something that is untranslatable, a word for which there is no equivalent in a colonial tongue? Is the gap in the precarious, nebulous space of translation, where the meaning of an original language is lost? Lou Sheppard taught me that this space is called a lacuna, “a place where the assumptive linear is loosened, a place of slippage.” In their installation and performance at the Khyber Centre for the Arts, they propose the question, “Is it possible that the lacuna could be read as queer space?”

When we think of our own queerness we often don’t have the words to describe the ambiguity of our attractions—the ways we feel connected to our bodies or the ways by which we connect and care for other bodies. Sheppard describes queerness as an “un-chartable place in our language and in our identities,” and they explore the possibilities that resonate when queerness bridges these gaps.

The phrase “a strong desire” comes from the criteria for gender dysphoria in the Diagnostic and Statistical Manual of Mental Disorders (DSM-5), which are still used to “diagnose” transgender individuals so they can access hormone replacement therapy (HRT) and gender reassignment surgeries (GRS) in Canada. Most folks within the transgender community reject the notion that our identities still exist as diagnoses. Our bodily autonomy is disrupted by the ubiquity of Western medicine, and in order to exist and live we have to somehow bypass this gatekeeping.

Sheppard does the work of teasing apart these diagnostic criteria and translating the spaces between each word into labanotation, a notation system used to analyze and record human movement. For the exhibition, Sheppard covered the white walls of the Khyber with angled shapes along one side and words across another. Some of these shapes were shaded, others were hollow or filled in with black paint. They bore a sharpness that commanded attention—the edges were angled with a painstaking precision that filled the room with a dense feeling of control. These shapes became the labanotation. 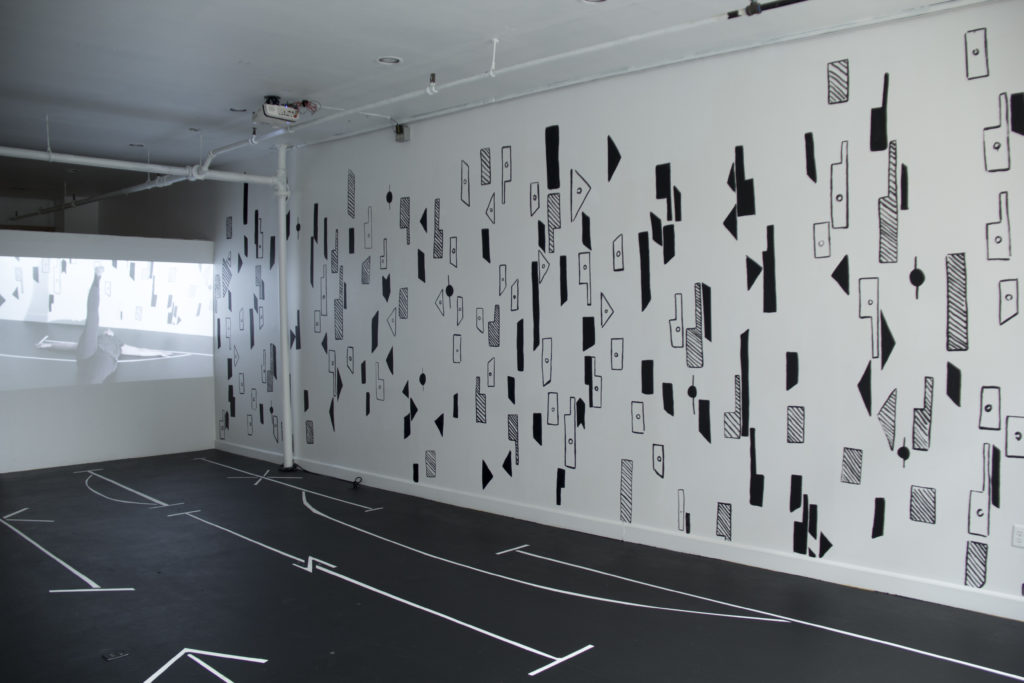 Leelee Eko Toyosi Davis, a Canadian-born genderqueer performance artist, took the directions of the labanotation and translated them into movements. Video documentation of their performance was projected on the walls of the Khyber throughout the exhibition’s duration. I had the immense pleasure of witnessing the first performance that was birthed from the trauma of translation: the movement of trans bodies battling a language that we have not chosen, then finding space in the gaps to exist. I watched in awe as Davis moved between breaths, pointing their limbs and moving about the room. I watched mesmerized as their long dark hair swept across the black floor and their shadow on the white walls behind them echoed their precise movements. The dance was meticulous, an actualized form of the words written on the walls above, spelling out the specific movements that Davis and Sheppard mapped out verbatim. I watched as they took the firmness of lines and the sharpness of edges to create something soft, yet striking. I recognized the movement of my own body in the dance that they created together, how our experiences as trans people are so unique but entangled. The shadows repeat our steps—the ghosts are still there. Still, we exist.

Sheppard asked me to write a poem, reproduced here, to accompany their project. They wanted me to write within the gaps—the translation of queerness—to show the ways I am reflected within the framework that they cultivated. I reflected on the reality of being an Indigenous trans person in Canada, about the reality of a healthcare system that is unforgiving to Indigenous peoples and about the reality of a lost possibility, as a trans femme. My poem is titled “Iskwêhkân,” which in English translates to “one who lives/acts like a woman.” It is a perfect example of a lacuna that exists in Canada: the lexical gap between Indigenous and settler languages is still pervasive today, and Two-Spirit people like me are trying to find words that describe our actuality.

We have a strong desire for normality, for a life full of potential that would be promised with the same certainty as our pain, potential of a life forgiving this body we hated for so long, though her love is endless.

I know that a conceptualization of queerness existed within an Indigenous worldview that colonizers didn’t want to survive. I want to reflect, in my writing, upon how the variety of words in nehiyawewin (Cree language) used to describe gender and their translations to English are rooted in a colonial way of thinking—a way of thinking rooted in white supremacy and a cis-heteronormative framework of gender binaries.

Sheppard and Davis’s collaboration is ingrained in a way of thinking about the complexities and complications of language, time and trans narratives. If we can recreate a narrative that coexists with our bodily autonomy, then we can disrupt sterilization and medicalization by existing alongside each other.

Now when I think of Lou Sheppard’s “A Strong Desire,” I can’t help but think about companionship and kinship in an othering world. I found this in the space, with them:

I am lost in transition,
I mean, I am lost–
but I don’t know
the translation.

Western culture would say I am a man, with a strong desire to be a woman. They even translated my mother-tongue to say that I am one who lives/acts like a woman, but this is also an imperfect translation or definition of my being.

I would ignore the gaps that live between my tongue and my teachings. Feel the vowels reverberate in my throat and know this is more than my colonizers would ever let me say. My ancestors would not call this a desire but a destiny – that I exist in a multitude of possibilities.

I am finding my way
ebbing along a river,
along the same curves
of my newly formed hips

Iskwêhkân, one living as divine sweetness.

We have a strong desire for normality, a life full of potential that would be promised with the same certainty as our pain, potential of a life forgiving this body we hated for so long, though her love is endless. Remember to drape her in gold—kiss her wrists for being imperfect as she dances along a path not chosen, a path which determines what happens with our body. A dance where doctors lead, where the diagnosis is a song sung through her crushed esophagus, can they hear us wheeze between beats? Can they see her twist our limbs, point these appendages towards the sun as they spin us into something softer? I’ll arch my back, I’ll fold, to be anything softer.

She will always be a ghost.

the light is playing tricks
on shadows alongside me.
They keep asking–
what is this thing that I am?

I can feel the condensation on the concrete,
And I want to break,
I want nothing more.

A femme once told me that all trans women are ghosts. I understand what she meant now. I feel myself mirroring my shadow. I feel myself being transparent – an apparition of my own possibility. I exist but I am the shadow of what was once attainable.

I will birth a new possibility.

I will carry this possibility, gestate for nine months letting it kick at the space where my vagina will become. I will sing it songs of a love that is forgiving, a love that is safe through my healing throat – I will know this love exists. I will teach it how poetry is a movement of reclamation through words, how it flows in the blood of my ancestors not spilt—I’ll pass it on. I will dance with it in my body, a dance between me and my shadow, both of us becoming our own.

Iskwêhkân, we are one who lives like the land.

Arielle Twist is a Nehiyaw, Two-Spirit trans woman who creates to reclaim and harness ancestral magic and memories. She is originally from George Gordon First Nation, Saskatchewan, and is now based out of Halifax. She is an author and multidisciplinary artist. She has work published with Them, Canadian Art, The Fiddlehead, PRISM International, This Magazine and CBC Arts. She has been nominated for a Pushcart Prize and shortlisted for a National Magazine Award. Her debut collection, Disintegrate/Dissociate, was a finalist for the Publishing Triangle Awards for Trans and Gender-Variant Literature, won the Indigenous Voices Award for Published Poetry and is a finalist for the Dayne Ogilvie Prize for LGBTQ Emerging Writers. Her work has been exhibited in galleries countrywide, including the Khyber Centre for the Arts, Toronto Media Arts Centre, La Centrale galerie Powerhouse, the Centre for Art Tapes, the Art Gallery of Mississauga, the Art Gallery of Nova Scotia and the Agnes Etherington Art Centre. In 2019 she was awarded the Indigenous Artist Recognition Award from Arts Nova Scotia for her work. She is currently a MFA candidate at OCAD University.