The Scarborough-based artist finds inspiration in Derrida, archives and the maternal bond Erika DeFreitas, so between narrow and reason and the looseness of shape (still), 2018. Single-channel video, no sound, 9 min 43 sec. Courtesy the artist.

I have been getting to know Erika DeFreitas’s work in reverse, from most recent, and tracing the lines back to its earlier iterations. When I first encountered her work, I was struck by her versatility, as she intuitively employs different mediums and unconventional approaches to confront big questions like absence and the fear of loss, death and mourning, and ideas surrounding identity and lineage. Echoing her artistic background in performance art, these recurring themes often take the form of performative acts which are then documented as video, photography and sculpture. Using gesture as method, DeFreitas honours how movements and the body sometimes say more, and much more differently, than words do. She examines the interstices of memory through a process in which absences are conjured into presences and buried histories are recalled and re-membered.

In her recent videos and sculptures shown in the exhibition “to prepare for a longing, an itch” this past April at Y+ contemporary in Scarborough, DeFreitas used gesture to conceptualize the void of negative space and further question the means by which history is archived. On the last day of the show, artists and writers Francisco-Fernando Granados, Ricky Varghese and Fan Wu joined DeFreitas for a panel discussion about the exhibition’s themes. Wu set the stage with two questions: How can gesture be a form of memorialization, and What are the implications of gesture as mourning for our ethical and political forms of life? Granados discussed how grounding the body allows for agency, and departs from the idea of the figure as a static symbol, as is often seen in art history. The speakers shared their thoughts on how to create a visual vocabulary for mourning through their discussion of the repetition and gesture of mirroring, hauntology and object-oriented ontologies, and queried what medium memory requires. These themes, all present in the Y+ exhibition, were visually delineated through DeFreitas’s sculptures and videos, and connected through her use of gesture as method. 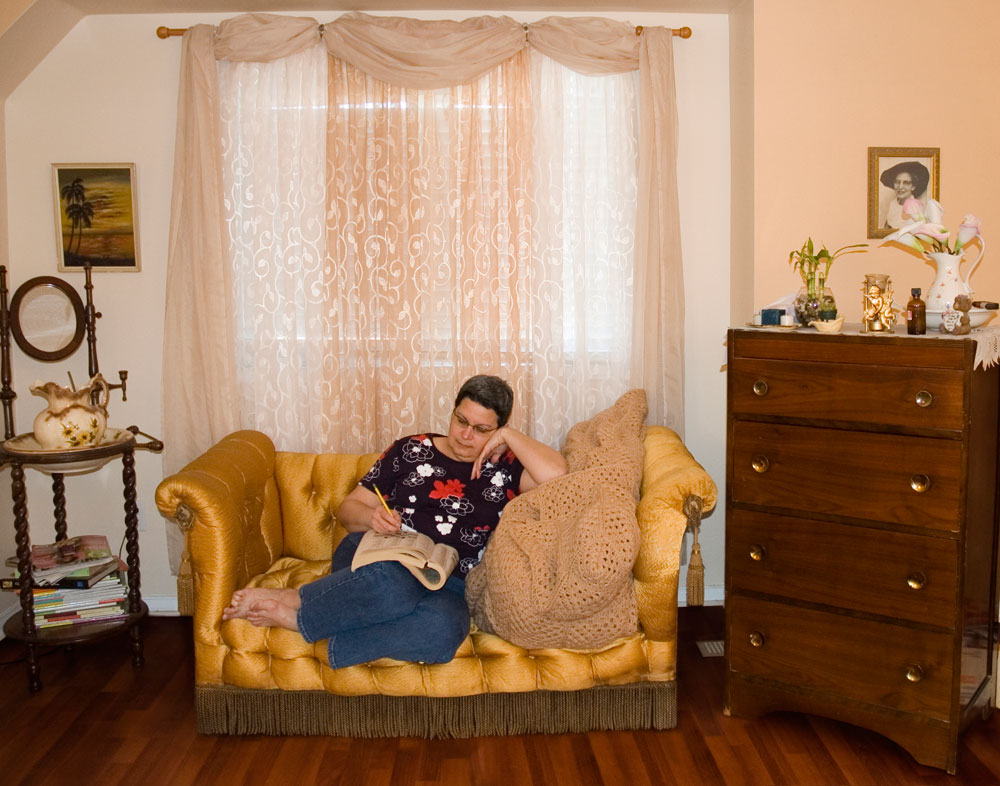 Erika DeFreitas, right there, between here and over there (in her bedroom no. 3), 2007. Archival inkjet print. Courtesy the artist.

At the core of this latest work—and arguably her artistic practice as a whole—is documentation of her relationship with her mother. What propels much of these collaborations is the motive of “pre-mourning,” also understood as anticipatory grief before the event of death, a concept explored in The Work of Mourning by philosopher Jacques Derrida. This direction in her work was spurred by DeFreitas facing the long-held fear of losing her mother. She describes knowing that at some point, a loved one may leave this life before you. “You’re already anticipating the loss of that person and knowing that you care about them,” she says to me over the phone. “It’s something that I find to be quite beautiful but also quite real.”

right there, between here and over there (2007) is the first work in which DeFreitas featured her mother as a subject. In the photographic series, the artist wraps herself in a blanket crocheted by her mother and then poses in close proximity to her mother’s body. That same year she made The Impossible Speech Act and The Truth of Lineage, and further worked to make her bond with her mother tangible while experimenting with practices of preservation. Through reference to a death-mask and the ingestion of her mother’s tears, respectively, the artist sought to freeze moments in time.

She describes knowing that at some point, a loved one may leave this life before you. “You’re already anticipating the loss of that person and knowing that you care about them,” she says to me over the phone. “It’s something that I find to be quite beautiful but also quite real.”

“In the past our bodies had become so present,” DeFreitas says of her previous work with her mother, “and with this new work [at Y+] I was really interested in making that which isn’t present, present.” Arranged around the gallery is the aura appeared a few minutes before(2018), a series of clay molds of the negative space between her own body and her mother’s. The sculptures themselves look like bone, with some parts smooth and others rugged, as if aged. The negative space between bodies is turned into an object, marking time and occupying space. Here, an absence becomes a presence.

Over 10 years earlier, right there, between here and over there (2007) took on a very different approach to these molds. Rather than enveloping her mother to eliminate the negative space between them as she has done in the photo series, DeFreitas chose instead to solidify this irrevocable gap. Created while sitting next to each other, the pieces of clay were placed in the middle of different parts of their bodies, such as their limbs, and subsequently shaped to contour the area between them. When made physical, the gap invited the audience to witness the shape of the bond she shares with her mother. This tactile approach to memorialization imparts that, no matter how close one is to another person, there will always remain a physical separation.

A motive to index her relationship to her mother—as a way to defy the fragmentation of memory—connects DeFreitas’s works from different periods. She wants the work to be the accumulation of an archive, always marking a specific moment in time. In a 2016 NoMorePotlucks interview, DeFreitas describes this intention: “In the event that my memory fails, I have these objects to reference this relationship.”

But the transference of memories is a slippery process. In the video until it was well over happening (2018), DeFreitas and her mother stand side by side, the view of their faces cropped, and the artist attempts to recount a dream her mother has just told her. As each recites the narrative over and over again, we see that the story DeFreitas tells becomes slightly altered from her mother’s version. Memory, it seems, can be unreliable even when documented. An approach to margin-as-repository often spurs DeFreitas’s archiving. “Much of me exists in the margins and a lot of my work is about that, too,” she says. And she describes her interest in “bringing the roots that have been hidden from history to the forefront and to the limelight.” DeFreitas brings this excavistic strategy to existing archives, such as the Western “canon” of art history, which she broaches in her recent artist book very strongly may be sincerely fainting (2017). She deconstructs the canon and shows what systems of power uphold history by making visible what and who has been obscured. In these types of works, DeFreitas is guided by Derrida’s notion of the spectre. Over the phone, she reads me a passage by Colin Davis about Derrida’s spectre: “Derrida’s spectre is a deconstructive figure hovering between life and death, presence and absence, and making established certainties vacillate.”

and so they made it plural, a return (2018) shows the artist’s hands slowly moving into different gestures in front of a grey wall. The work is a reinterpretation and activation of the static hands found in her book very strongly may be sincerely fainting. The book centres racialized and gendered hands that resemble her own, and cites art historical source material that ranges from the medieval period to psychiatric patients in the 19th century, to modern-day figures like Grace Jones and Carrie Mae Weems. In the video, DeFreitas’s hands morph in a looping, ghostly choreography, evoking these figures across time.

In the two single-channel videos the pause and mirrored peaks (2018) and so between narrow and reason and the looseness of shape (2018), positioned on a wall adjacent to the works with her mother, DeFreitas proposes that memory not only lives through the archive, but also through haunting. Both videos are connected by an 1870 painting by French artist Frédéric Bazille of a Black woman arranging a bouquet of peonies. After she first saw it a few years ago, DeFreitas felt haunted by the woman in the the painting. “Not in a negative way,” she explains. “I think sometimes the term haunting has a negative connotation, but I think haunting means just living. Living in my space in some way. Whether it’s in my thoughts, or writing, or seeing a flower that reminds me of the painting… There’s all these connections that draw me back to her.” In the first video, DeFreitas’s hands rearrange a cut-out outline of the woman in the painting, piecing it together to recreate her silhouette. In the second video, DeFreitas’s hands handle various objects—magazine clippings of Ancient Greek-era sculptures, the Virgin Mary wrapped in string, a collection of buttons, ceramic flowers—while an image of the painting anchors the video’s composition in the bottom corner of the frame. In both videos, the shape of the woman is reconfigured through DeFreitas’s caring gestures.

In this new body of work, not only does DeFreitas weave a language for mourning out of gesture, she also proposes a gestural language to describe haunting. She appeals to the framework of the supernatural—a framework that, especially in a Western context that champions logic, often goes unacknowledged as a valid source of knowledge. In our phone conversation, she circles back to Derrida by quoting Davis: “Derrida calls on us to endeavour to speak and listen to the spectre, despite the reluctance inherited from our intellectual traditions and because of the challenge it may pose to them.” In this realm of marginality, DeFreitas shows us how, in paying attention to the spectre, we can find new meaning. Like the woman in the painting who haunts DeFreitas, moving between spaces is not just about transgressing boundaries—it’s about refusing erasure. 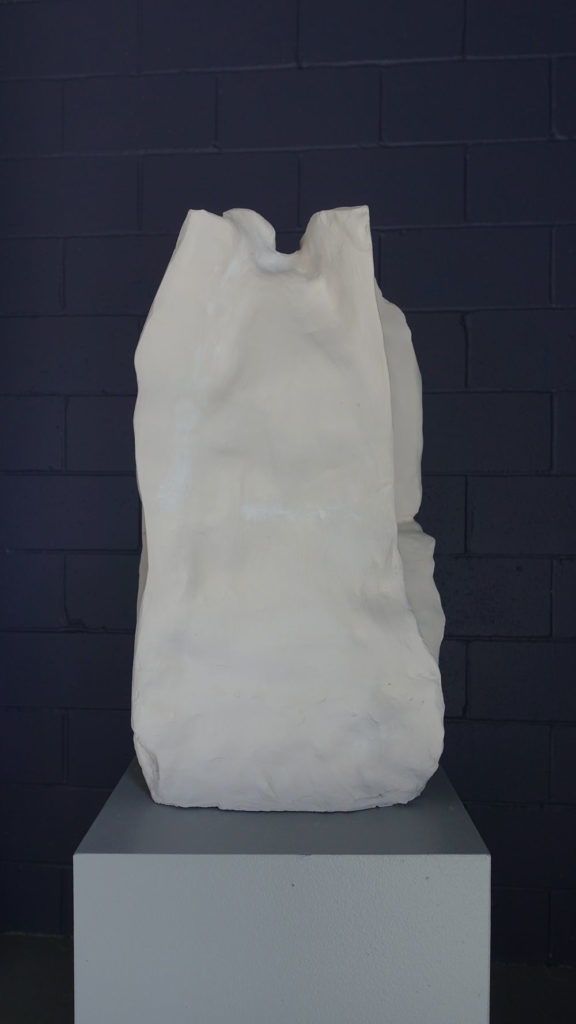 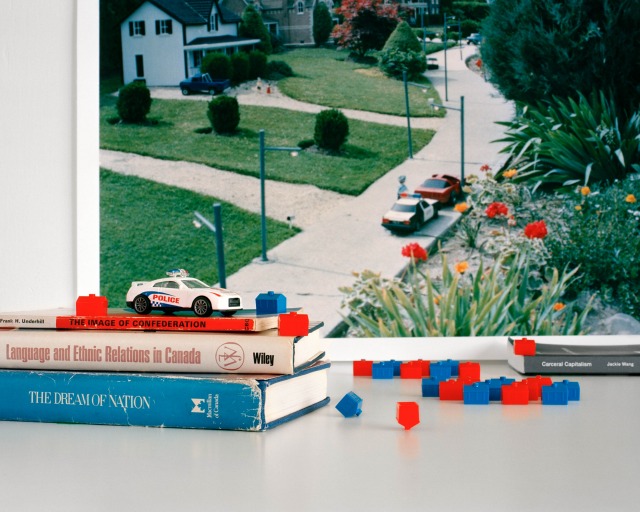 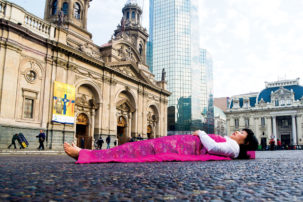 From our Fall 2017 issue, themed on “The Idea of History”: A national survey of 10 artists whose works look back while looking ahead. 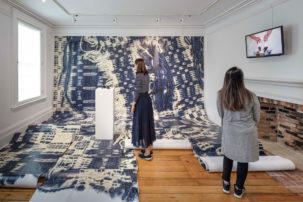 Ending Nostalgia at the Heritage Museum

Nostalgic props—from period costumes to horse rides—create a false sense of the past at many museums. A curator, with artists, is aiming to subvert that.