When one door closes, another opens. Reflecting on a year of unprecedented change in the Saskatoon art scene 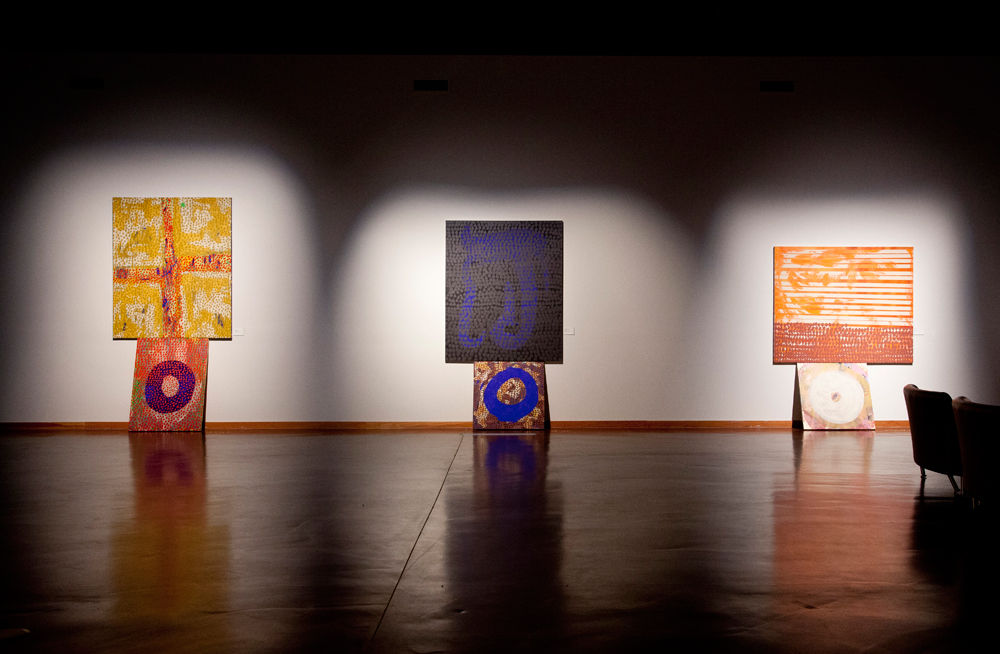 For two years, since the Mendel Art Gallery, a longtime hub of the city’s art scene, closed in June 2015, Saskatoon was quieter than usual. But the absence of that beloved gallery opened opportunities for new players and modes of relating visual arts to the city and region. Felicia Gay serendipitously took up residence as curator at Wanuskewin Heritage Centre, on the city’s northern outskirts, just a few months after the Mendel closed. Since then, she’s curated one great show after another and gathered new crowds to her Saturday afternoon openings. Between Gay’s work, a few other noteworthy exhibitions at local venues—including the University of Saskatchewan’s College Art Galleries—and the opening of Remai Modern in October, our subarctic city got really hot by the end of 2017. The changes are marked by excitement as well as uncertainty, along with what will hopefully become a productive tension between the various players’ local and global ambitions.

Wanuskewin is an interpretation centre that sits amid rolling grasslands, above Opimihaw Creek and the South Saskatchewan River. The site is a former buffalo jump, and archaeological evidence shows that virtually every pre-contact cultural group from the Great Plains region has visited the location in the past 6,000 years. It’s a breathtaking place, and a big challenge to produce contemporary art shows that can hold their own and even enrich the experience of a landscape that has so much history, spiritual depth and beauty. But since joining the Wanuskewin team as its first full-time gallery curator, Gay has achieved this, with shows that speak to the histories, cultures and land of the northern Prairies Indigenous peoples. In 2017 her work included exhibitions by Colleen Cutschall, Sherry Farrell Racette, Adrian Stimson, Jason Baerg and more.

The standout for me was “Axenet’i Tth’al” (pronounced “Aah-hen-neh tithul”), or “Fringe,” a project created over two years by Denesuline elders and youth of Patuanak, a Dene town in Northern Saskatchewan, with resident and visiting artists Michèle Mackasey and Manuel Chantre. Using both Denesuline aesthetic sensibility and traditional knowledge of hunting in the north, “Axenet’i Tth’al” was a complex and poetic installation that conveyed a deep sense of trust and cooperation, while celebrating the ingenuity of Northern Dene trappers and artisans. Not only was it a beautiful show, but it also stands as a model for community collaboration (it was funded by Regina’s Common Weal Community Arts).

Above and beyond the exhibitions, Ruth Cuthand is artist-in-residence this year, talking and beading with visitors on-site two days a week. In 2018, Joi T. Arcand will be in residence, making Wanuskewin even more of a must-see for any visitor to Saskatoon.

The opening show, “Field Guide,” curated by Gregory Burke, executive director and CEO, and Sandra Guimarães, director of programs and chief curator, lays down the Remai Modern’s programming philosophy. It aims to “animate the entire museum with a spirit of active engagement, curiosity and disruption” while adhering to a sparse and cerebral aesthetic appropriate to Modernism. Labels are hard to find, but visitors wanting to dig deeper can rent headsets for an audio tour. The show contains a variety of stunning and often challenging pieces by a selection of (mostly major) older and newer Canadian and international artists.

There are references to cold and hot wars, in Stan Douglas’s multichannel video installation The Secret Agent (2015)—newly acquired by the Remai Modern—and Palestinian artist Ahlam Shibli’s photographic installation Occupation (2016–17), which was featured at Documenta 14. There’s also Kader Attia’s large-scale reproductions of two paintings of Catholic masses, Colonial Modernity: the first mass in Brazil and Algeria (2014), and Paulo Nazareth’s video Anthropology of black II (2014), shot in the Museu da Loucura (Museum of Madness), an early 20th-century psychiatric hospital in the artist’s home state of Minas Gerais, Brazil. Together, works like these address the horrific aspects of Modernity—albeit, as they have manifested in rather distant lands. They are artfully arranged (in “constellations”) with works speaking to Modernism’s lighter, brighter side, including pieces stationed elsewhere in the gallery by local artists Eli Bornstein, Robert Christie and Tammi Campbell.

The Curtis Santiago exhibition “Constructing Return,” which closed last weekend at the College Art Galleries, University of Saskatchewan, would have worked in “Field Guide” too. I loved everything about this show, curated by Magdalyn Asimakis. In his first exhibition at a university gallery, the self-taught, phenomenally talented Santiago (also known as Talwst) displayed works in sculpture, drawing, painting and video. Together, they ostensibly “explore places and media” to access the artist’s ancestral past and come to terms with Stuart Hall’s reflections on the Black diasporic experience. (Santiago was born in Toronto to Trinidadian parents, and raised in the Edmonton area, where he entered the arts as a DJ and dance-rock musician.)

However, I didn’t read much soul-searching in these works, and Santiago’s self-portraits really seem like masks concealing—well, who knows what. Instead, he’s made startling references to Modernity’s misuse of Black bodies to signal authenticity, including big charcoal-black buttocks mocking viewers like a raucous Negra by iconic Brazilian artist Tarsila do Amaral. In the middle of the room, there’s a large plinth covered in hefty, unglazed terracotta noses: Black noses of various shapes and sizes, which, like Jewish noses, have been pointed to by whites as markers of difference and deviance (this work is particularly poignant and funny, as the gallery sits across the hall from the university’s Museum of Antiquities, filled with white plaster casts of ancient Greek busts and body parts).

Santiago also made a very interesting video in South Africa, in which he explores the different styles of beadwork made by men and women on the streets and in a museum. Outside the video viewing room, Santiago’s own beaded helmet sat majestically on a pedestal. And the pieces he is best known for were also on display: impossibly tiny and evocative miniatures housed in jewelry boxes depicting a boatload of refugees; an empty wagon leaving a slave market; a room in an empty colonial home; and many more. What is most impressive is the artist’s ability to communicate enormous depth in works made with the lightest touch. Each drawing or sculpture—indeed, the whole show—was worked on only until it was finished exactly just enough.

Saskatoon residents look forward to 2018, when we’ll get a better sense of the Remai’s direction, learn more about Wanuskewin’s $40-million expansion plans, and also meet the new director for the university galleries (the job has just been posted). Only one thing is certain: Saskatoon’s art scene will never be the same again.

Jen Budney is a Postdoctoral Fellow at the Centre for the Study of Co-operatives, University of Saskatchewan, where she is teaching a course called Ethical Leadership and Democracy in Public Service. She has worked variously as an art writer, editor, artist-run centre director, program officer at the Canada Council for the Arts, and museum curator. From 2008 to 2013 she was employed as a curator at the Mendel Art Gallery. She tendered her resignation to pursue a PhD in Public Policy a few months before Gregory Burke was hired as CEO/Executive Director.

It’s not enough to say to Indigenous people, “Let me add some signs in your language to my art institution.” A re-naming is required, and Jason Baerg offers it 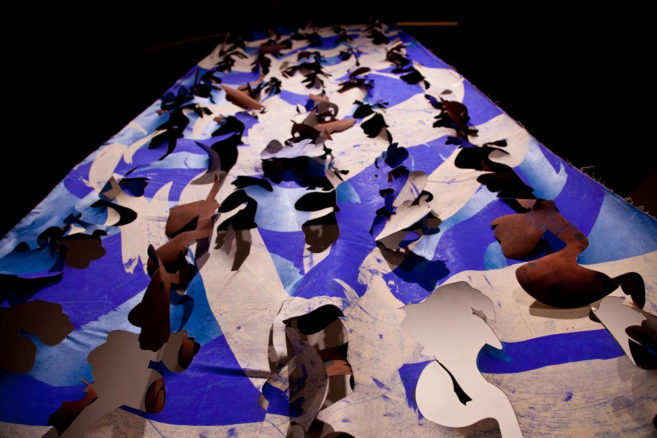 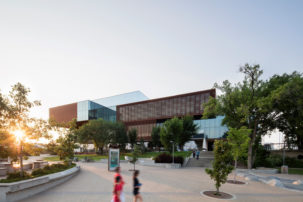 The new Remai Modern opened with a splash in Saskatoon last weekend. The question is: Where does it go from here? 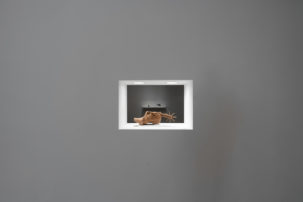 This year, the SITElines biennial in Santa Fe, New Mexico, explores home and belonging—in a place where distinctions between inside and outside often feel blurred