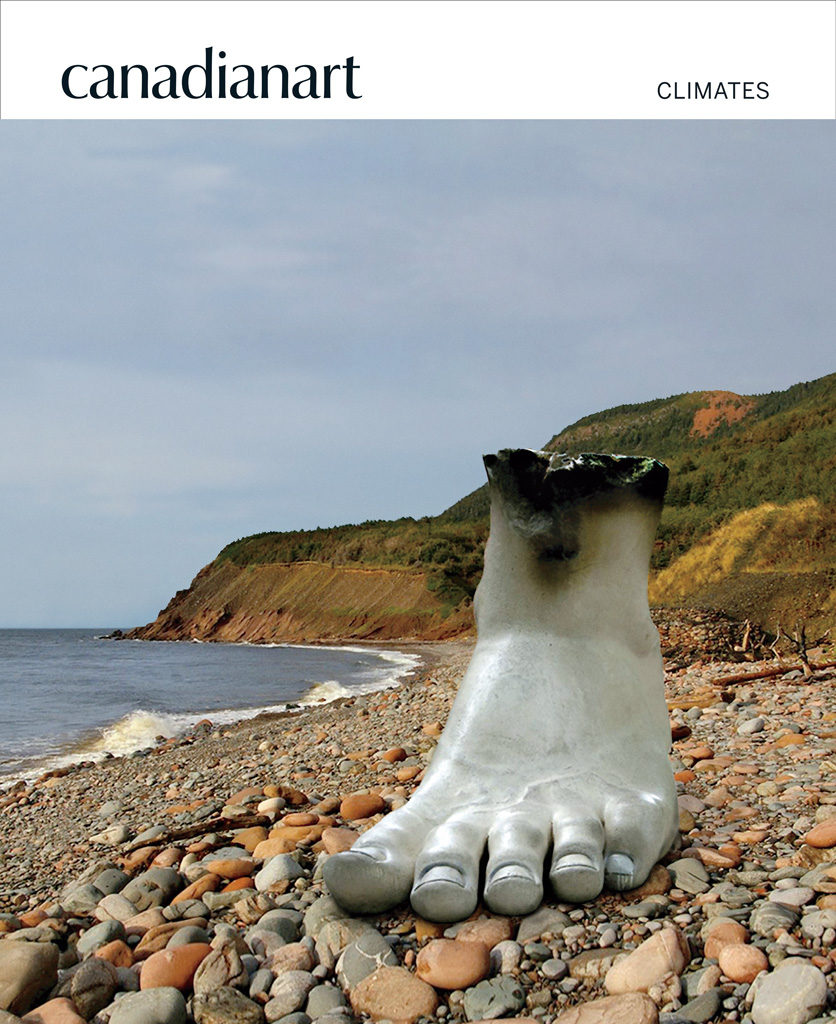 This was one of the hottest summers on record, though we won’t have the statistics to prove it until after we go to press. While making this issue, we experienced relentless heat waves, which, one day, materialized as sublime, dark, gathering clouds visible through our office windows—somewhat of a welcome sight during the late afternoon workday. This is a common understanding of how the apocalypse will look: something frightening on the horizon, a violent and quickly moving storm. But the clouds passed, briefly and beautifully. It’s tempting to relate all weather patterns to global warming, which of course cannot be reduced to a single event. Climate change won’t pass. Try as we might, it cannot be seen in a single image, or contained by the visual.

This is not an issue about what we see, but about what we register, and don’t register. Foremost it is an issue about how artists can help us register change. And it is, undoubtedly, an issue about the human impact on a variety of climates, and on the concept of climate itself. Our Planet of the Apes–style cover, by Calgary artist Jason de Haan, seems both speculative and satirical, playing on the concept of the carbon footprint while prompting our most romantic ideas of a post-human future. It also draws attention to the carbon footprint as a metaphor—and a fear-based fantasy. Surely, carbon tracking and offsetting is just another way we shift, rather than solve, a problem.

In producing an issue on “Climates,” we found it impossible to avoid a term that is becoming increasingly widespread: the Anthropocene. The term is charged and contested, but at its simplest, it suggests our current geologic era is irrevocably shaped by human activity. To consider the Anthropocene is thus to consider ourselves. It is an introspective and critical gesture, and must be about examining power relations, not just human/non-human relations. It must take into account colonialism, how some are more responsible than others. We live in a time of perpetual crisis and chaos; to be fatigued by it is a measure of privilege. Here, an issue about a variety of uncomfortable climates that affect artists, their work and the art world. Here, art and ideas without the air conditioning.

Jason de Haan, Proposal for a Megalith on a Maritime Beach (detail), 2016, digital collage. Courtesy the artist and Clint Roenisch.

When Oil Is Our Lifeblood

An artist’s first-hand account of the ocean, and everything we put in it

I Don’t Know Where to Find Sweetgrass

Last year, in a forest outside the Banff Centre, artist Meagan Musseau braided bright orange surveyor’s tape around a spruce tree—to express gratitude for the land and reclaim the ancestral knowledge that lay in her hands. Here, Erin Sutherland, in conversation with Meagan Musseau, explores that action further

by Erin Sutherland and Meagan Musseau

What would it take to ensure that institutional diversity is not a passing fad?

10 Artists Who Work with Changing Environments

Earthworks and paintings, landscapes and ceramics—none are seen as static by this group of creators

Rising temperatures may provide a guide for thinking through how the colonial, the racial and the capitalist are deeply—and materially—implicated and intertwined

“Our earth-wrecking makes the sky so good and ’grammable.” So observes the narrator in this short story, from our Fall 2018 issue themed on Climates

Our 1969 foray into the Arctic was, in hindsight, an intellectual adventure—a naively colonialist art-scouting trip. It was also an eye-opener

I want to think about climate change outside of meteorology, and think of it instead as a form of industrial toxicity

by Elizabeth A. Povinelli