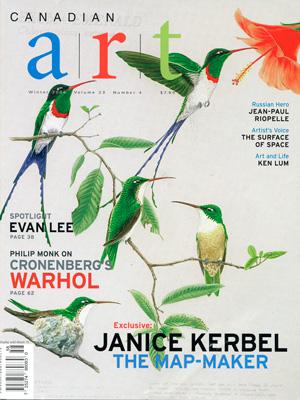 Riopelle in Russia An unusual collaboration takes the work of the Canadian modern master to St. Petersburg’s State Hermitage Museum by Gary Michael Dault The Map Maker Janice Kerbel aims conceptual art at new and more personal realms of dematerialization by Terence Dick Something’s Missing A Canadian artist opens the 2006 Biennale of Sydney with a keynore address about what art can and should aspire to by Ken Lum Warhola: A Horror Film A forer AGO curator on David Cronenberg’s curatorial debut at the Art Gallery of Ontario by Philip Monk The Surface of Space Theoretical physics might have something to offer painters who want to expand the possibilities of abstraction by Robert Linsley

Sponsored by The Fraser Elliot Foundation in memory of Betty Ann Elliot Evan Lee: Photography 21 The artist invents a photo practice with a flatbed scanner by Adam Harrison

A Canada-wide guide to the season’s best exhibitions

Books on the visual arts

Where Are We Going? by Charlene Lau Grayson Perry by David Gleeson Dada/Dereconstruction by E.C. Woodley Miroslaw Balka by Ann Danilevich