On the Road with Daniel Joyce: Alberta

Daniel Joyce's cross-Canada trip takes him into Alberta, where booming changes in Edmonton and Calgary signal a widespread cultural renaissance. 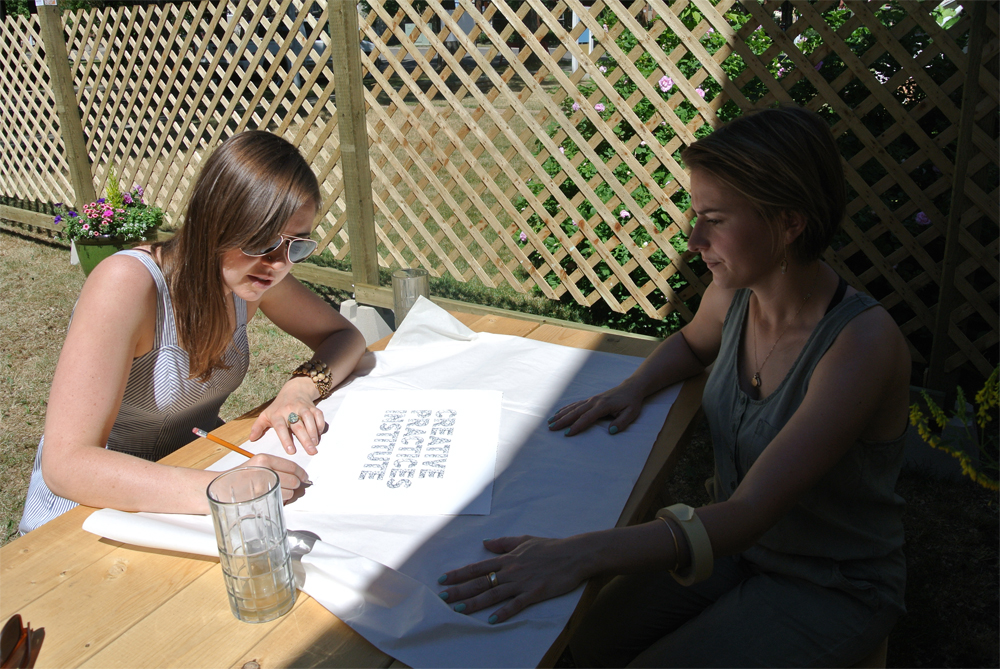 Brittney Roy and Connor Buchanan at the Creative Practices Institute (CPI) in Edmonton.

Chelsea Boos in the the Drawing Room in Edmonton.

Artist Andrew Frosst out front of Pith Gallery and Studios in Calgary.

Alberta with the Rockies in the distance.

Brittney Roy and Connor Buchanan at the Creative Practices Institute (CPI) in Edmonton.
Chelsea Boos in the the Drawing Room in Edmonton.
An Albertan landscape.
Nicole Kelly Westman and Larissa Tiggelers at Stride Art Gallery Association.
Artists Scott Rogers and Jeremy Pavka at Truck in Calgary, with director Renato Vitic.
Artist Andrew Frosst out front of Pith Gallery and Studios in Calgary.
Cassandra Paul and Nate McLeod installing Omar Lalani's “Weeping and Making Sad Noises” at the Avalanche! Institute of Contemporary Art in Calgary.
Alberta with the Rockies in the distance.

This month I’m heading west across Canada on the Trans-Canada Highway, starting from Toronto. Although I’m tempted to call the series of dispatches I will be writing along the way a “regional survey,” the limited time I can spend in each community means that my coverage will be highly subjective—it would be unfair to consider this a comprehensive overview. Instead, these articles will offer a condensed journal of this journey, and an opportunity to recognize a few of the dedicated artists and organizers who advance the arts in these locations.

As soon as I hit the grid it was clear that Edmonton was booming. Construction was everywhere: my route wound around roads that were being widened or divided and cranes constructing new condos and offices. My hosts in Edmonton were two fellow NSCAD University graduates, Andrew Buszchak and Jenika Sobolewska, who are deeply involved in the arts in Edmonton. Buszchak keeps a studio and sits on the board of a studio/gallery collective called Creative Practices Institute (CPI), while Sobolewska works for the Edmonton Arts Council. They wasted no time in showing me around, swerving around the pylons of their growing city along the way. My itinerary was already packed with galleries, and Buszchak and Sobolewska’s tour added more restaurants, pubs and local hangouts than I could possibly visit.

While talking with Buszchak and Sobolewska, the influence of artists’ studios on the cultural scene of Edmonton became resoundingly apparent. It was also notable in Saskatchewan and Calgary—the studio scene in the Prairies holds a significant role within the cultural community, perhaps more so than in other Canadian regions, where art museums and artist-run centres tend to dominate. CPI, the studio/gallery collective that counts Buszchak among its board members, was one of these integral studio spaces. The day after celebrating the space’s one-year anniversary, co-managers Connor Buchanan and Brittney Roy explained that, “Our space is here for emerging artists or experimental art.” “If someone is quite established, but wants to try something new—for example, merge into performance art, or try their hand at painting or installation—we want this to be the kind of space for them to do that,” explained Buchanan. To rent a studio at CPI you must apply with a project in mind and a time frame. Tenants are allowed to rent a studio for a maximum of two years, so the space functions akin to a local residency space.

I also visited the Drawing Room, a storefront space with a small gallery and printed-matter store near the front and studios in the back, run by artist Chelsea Boos. “Edmonton is going through a real renaissance right now,” said Boos. “Everybody used to want to get out of Edmonton, now suddenly everyone is moving to Edmonton and the cultural community is really booming… We don’t have a super long history of visual-arts advocacy, but hopefully that’s changing now with the city jumping on the Creative Class bandwagon.” You could feel this shift in the air.

Over the years, artist friends have detailed their love-hate relationship with Calgary to me: it’s expensive, yet there is work and money. The winters are frigid, but there are warm Chinook winds that make it liveable. The cowboy culture is offset by a group of engaged artists.

Larissa Tiggelers, the outgoing director of Stride Art Gallery Association, met with me on a Monday, the day of the week dedicated strictly to her studio practice. Instead of meeting at the gallery, we met at her home-studio, which she shares with other art-gallery folks: Jeremy Pavka, programming coordinator at Truck, and Ann Thrale, head technician at the Alberta College of Art and Design’s Illingworth Kerr Gallery.

Tiggelers is leaving her position to pursue an MFA at the University of Guelph, so, with only a couple of weeks left at Stride, she has been busy training the incoming director, Nicole Kelly Westman. She explained that she has had a tough run at Stride, as she took on the lead role in 2013, the year of Calgary’s devastating flood. “That took over a year to recover from, and we still haven’t fully. We were in the flood zone, and our exhibition archive was hit the hardest,” said Tiggelers. She described being in recovery mode throughout the first year, mopping mud while the exhibitions and fundraising initiatives suffered. “People think it’s easy to fundraise in Calgary, that there’s all this money around, but it’s not that easy,” she explained. “There’s money, but there’s a lack of cultural pallet among the larger population. It’s hard to get the population outside of artists to attend events.” The art scene can be quite insular, she noted. “At openings its mostly artists, curators, art writers or partners of artists. In Calgary the artists make art for each other.”

I spent the following day with Scott Rogers, an artist originally from Calgary but now based in Glasgow. Rogers and I met in Halifax in 2010 when he installed “Wireframe” at the Khyber Centre for the Arts, perhaps my favourite installation during the years I worked there. Rogers was only in Calgary for a day after installing “Where Is Our Twentieth Century Promised” at the Southern Alberta Art Gallery in Lethbridge. We visited a few places together, stopping in to chat with Naomi Potter, director-curator of the Esker Foundation, and Renato Vitic, executive director of Truck. Near the end of the day we bumped into artist Andrew Frosst, who had lived and collaborated with Rogers during the heyday of the Arbour Lake Sghool, a collective comprised of Frosst, Rogers, John Frosst and Justin Patterson. Frosst’s description of Calgary’s art scene has a tinge of the Old West about it. “There’s not really an old guard, though there are some important figures in Calgary,” explained Frosst. “The avant-garde doesn’t have to compete with a hugely influential older generation of contemporary artists, for the most part.” We visited the Bakery Studio Collective, Pith Gallery and Studios, this year’s Wreck City location and Avalanche! Institute of Contemporary Art together.

Avalanche! ICA is a small commercial space that shows work by emerging Canadian artists. Artists Cassandra Paul and Nate McLeod run the space, and also manage a few studios in the building. For each show Avalanche! ICA also asks the exhibiting artists to design a limited-edition print to be sold by the gallery. When we arrived, Paul and McLeod were hanging wet oil paintings by Omar Lalani for his exhibition, “Weeping and Making Sad Noises.” “Many of the galleries in Calgary focus on mid-career or established artists, and those that work with emerging artists can be very competitive and often schedule exhibitions years in advance,” explained Paul. “While these spaces are incredibly valuable for artists, we wanted to create a gallery that was more flexible and responsive to what was happening locally. Because Avalanche! ICA isn’t restricted by funding or reporting, artists have more flexibility to shift ideas and present new and experimental work without worrying about adhering to a formal proposal or pre-approved exhibition.”

As I left Calgary and headed further west, the open, endless skies and fields of the Prairies gave way to the slowly rising horizon of the Rockies. The long, straight roads of the Trans-Canada Highway turned into winding paths that twisted their way around the mountains. The heat of the summer barely touched the mountains’ ice-covered tips. I had never experienced such natural beauty; all art aside, this had to be the climax of the trip.